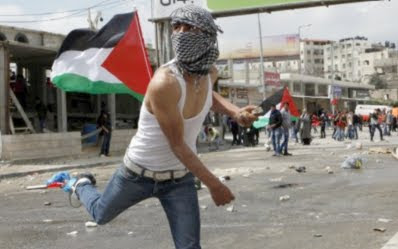 Gee, all the big talk about the Global March to Jerusalem that was supposed to happen yesterday. I wasted time trying to find information on this event before the reality set in: media in Jerusalem were hiding: from their excitable point of view, nothing did happen. No opportunities for footage of mean JOOOS murdering Poorpoor Palis. They really do believe the things they hype so when those photo ops didn’t happen, what’s there to report?

I shouldn’t have needed reminding. When Google News had nothing on Jerusalem by 2:00 pm our time…well, duh, Dymphna.

Jerry Gordon at New English Review had been following the lead-up to the non-event, concerned about how ugly it would become. His post has lots of background:

In the run up to yesterday’s Global March to Jerusalem (GM2J), there were a number of predictions that the aggressive promotion by the event organizers were overblown and the “Mad Marchers” event would be a bust.

Nidra Poller, ex-pat American, talented writer and long time resident in Paris, and Cleveland -based founder of Boycott Watch, Fred Taub, thought that might be the case. Poller was relying on her seasoned and incisive intuition drawn from personal knowledge of what happens in France and Israel. Taub took me though the Gm2J and other social media stats of the several websites and their Twitter account to demonstrate that there wasn’t a groundswell of interest in the event, save for that shown in Iran.

This was reflected in the meager figures for GM2J website traffic and links to other sites at Alexa.com and low levels of following reflected in Tweets activity on Twitter. In his opinion this was evidence of low support for the GM2J event and that the International Boycott, Divestment Sanctions campaign against Israel was possibly running out of steam.

Probably not “running out of steam” in Norway, though, where the government drives the conversation.

But Jerry was right to be concerned. In that post, he shows the various networks who were pushing for this in Muslim countries. Iran spent lots of money, Turkey was willing to ferry people to Lebanon for the event if they could make it from south Asia. As he demonstrates in that post, different groups whose mutual hatred will have them at one another’s throats if they ever manage to get rid of Little Satan were working together to make this happen. But as the large echoing silence from the media indicates, it didn’t.

What is of particular interest in Jerry’s research is the ways in which outsiders can gauge what’s going on by watching the internet chatter. The relative lack of chatter on this event was thus a good indication it was destined to be another FAIL. Indeed, it pretty much looked like the last flotilla (and the alternate flytilla for that matter) — i.e., lots of hats, no cattle.

Go to his post for the embedded links and further information.

Several people sent round an email yesterday describing the scene in Israel. After finding out who’d written it, I contacted the author, asking for permission to reprint. His response came, but I didn’t see it until the Baron asked me if I’d decided not to post it…yes, it is easy to lose track of things in the bowels of our webmail…

What makes his report of particular interest is the man’s job. The point of view from someone who provides security for others has gravitas.

He also has a good suggestion for the wounded to follow:

[The emphases below are mine, as are the italicized editorial comments in brackets]

“After a long day, somewhat tense but obviously transparent, Israel reported
that 80 people were injured slightly from mostly non-lethal gas used as a
riot control tool. The Palestinians have obviously exaggerated that number and inflated it to a much larger number of 340 injured and they are claiming
one person was killed.

All of the events in Israel are over and the conclusion is that the “million
man march” was a total failure and a show of “stupidity” if I may say so.”

[You certainly may say so. “Stuck on stupid” represents so much of the evil behind the attempted attack]

“More importantly, it also shows that those who endorsed this march like the Bishop Desmond Tutu, The Minister, Wright, and the Politician Galloway, who were amongst other terrorist faction leaders are simply just as stupid and in fact have no value for ethics, human rights or life itself. This

the global media does not seem to report and the BBC actually covered the
political elections victory of Mr. Galloway in the United Kingdom more than
they did the march itself.”

[That’s because they only want to report the sensational, and this wasn’t. I’ll bet they had their jornolists on the scene, though, twiddling their thumbs…]

“Most normal countries refused to even provide any form of acknowledgement to this non event as it was arranged and organized by terrorists including the Muslim Brotherhood and Iran who is now very openly and obviously seen by
most as a global sponsor of terrorism.”

While we were watching the “Mad Men March”

Just another day in the life of a tiny but resilient and strong little country called Israel.

To close off for the day I am obliged to report that there have been a few missiles fired (yet again) into Israel from Gaza. No injuries have been reported. No reports have been made by the foreign media (as usual).

This “Mad Marcher” event cost the Israeli Government millions of dollars. If it were up to me I would suggest suing the organizers and those who endorsed this event. The wounded should also no doubt also sue the organizers as they are directly to blame for their injuries after all.

As the real spring looms on Israel and some fantastic weather is in store for us this coming week, I hope you all have a great weekend.

Remember: “The greatest danger in planning for tomorrow is using yesterday’s logic.”

Mr. Kahlberg shared some of his sites:

Here is M.K. International Security Consulting. He is the CEO.

Here are great photos from Mr. Kahlberg, including pictures of Allen West. I’ll bet HE enjoyed that tour!

The photo at the top of this post was borrowed from New English Review, which is where you’ll also find Jerry Gordon’s latest essay, American Jews Who Support Shariah Imperil Us All

In the introduction, Jerry says:

This article delves into why Jewish defense groups and alleged conservative Republican Jewish figures have made common cause with Muslim Brotherhood front groups in opposition to the ALAC [American Laws for American Courts] legislation. Legislation that seeks to protect all Americans against the possible recognition of Shariah law in our courts that could supplant bedrock Judeo-Christian values, the core of the US Constitution and the law of this land.

7 thoughts on “The Global March to Nowhere = FAIL”