Update: Here is the video of Mullah Krekar’s arrest. I can hear him shout “Don’t blame Islam”, but I can’t understand the second shout:

The notorious “Norwegian” firebrand Mullah Krekar has finally been brought to justice. He has been sentenced to five years in jail for threatening the Kurds who burned a Koran.

Our Norwegian correspondent The Observer sent several tips and translations on the Jumpin’ Jihad Jailbird. He includes this note:

Apparently Mullah Krekar attacked a reporter later that day (he wasn’t taken into custody afterwards, he will be asked to show up at a jail sometime in the future) when a reporter from TV2 in Norway wanted a comment on the sentence.

Well, I suppose this will mean that more non-Western immigrants among the inmates will be radicalised by the Mad Mullah. Or maybe he will serve his sentence on the idyllic island of Bastoy?

The sentence will probably be appealed so, the circus is likely to go on for a long time.

Here’s a link to VG’s article with photos of Krekar attacking the reporter.

Mullah Krekar, the Iraqi-born cleric and founder of the radical Ansar al-Islam Islamist group, has been jailed for five years in Norway for making death threats against officials and others. 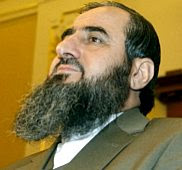 Mullah Krekar, the Kurdish cleric and founder of radical Islamist group Ansar al-Islam, has been sentenced to five years in prison in Norway for issuing death threats against officials and others.

An Oslo district court found the 55-year-old guilty on Monday of threatening the life of Erna Solberg, a former government minister who signed an order expelling Krekar in 2003 because he was considered a threat to national security, the Agence France Presse reported.

Krekar, who came to Norway as a refugee from Iraq with his family in 1991, and whose real name is Najmeddine Faraj Ahmad, was also found guilty of threatening three other Kurds living in Norway who had burned pages of the Qu’ran or insulted it in other ways.

From his home in Oslo, Krekar founded Ansar al-Islam, which the US and UN regard as a terrorist organization and Washington blames for attacks on coalition forces in Iraq.

The UN added Krekar to a list of people believed to have links with Al Qaeda in 2006. The cleric remains in Norway despite the deportation order against him due to Iraq’s unstable security situation, the BBC reports.

Krekar, who claims to have stepped down as leader of Ansar al-Islam in 2002 and denies any ties to Al Qaeda, said in court that he would appeal Monday’s ruling, according to the Associated Press.

Today a large number of armed police arrested Mullah Krekar and took him into custody pending an arraignment (translation by The Observer):

TØYEN (AP) Here a screaming Mullah Krekar is led away by a dozen armed police officers.

Mullah Krekar, or Najmuddin Faraj Ahmad, which is his real name, was sentenced to five years in prison for making death threats and for inciting terror on Monday.

VG Nett was present outside Krekar’s apartment when police raided the mullah’s residence on Tuesday afternoon. Five patrol cars were parked outside, and at least ten police officers entered his apartment just before 14.00.

Krekar was led out of the apartment complex at 14.07 by armed police. He had a jacket placed over his hands, and it is unclear whether he was handcuffed.

“Don’t blame Islam,” he shouted in English as police placed him in a patrol car and drove away.

Krekar’s wife was inside the apartment when the police came.

According to information that VG Nett has received the PST has been considering whether to arrest Krekar and bring him into custody until the start of the appeals court case. Members of the Oslo Police department assisted the PST in the arrest, according to a press release published by the PST this afternoon:

“At 14.00 today the PST with the assistance from the Oslo Police department arrested Najmuddin Faraj Ahmad (aka Mullah Krekar) on the basis of the Oslo District Court’s verdict against him yesterday, and due to the obvious risk of him reoffending (terror threats).

“Krekar will be arraigned at the Oslo District Court and the prosecution will ask the court to place him in mandatory detention. As of yet no time has been set for the arraignment”

According to leader of operations Lasse Alver, police are currently searching the Mullah’s apartment. The police have so far not confiscated any of his belongings

“Was it necessary to involve such a large number of police officers to carry out the arrest?”

Last Tuesday Aftenposten reported that last weekend the mullah had posted an online video in which he urged his followers to attack Norwegian interests abroad. He specifically mentioned Norwegian police personnel.

An arraignment will be held tomorrow in the Oslo District Court, according to Krekar’s defense lawyer Arvid Sjødin.

“I do not know on what basis the PST decided to arrest my client,” he says.

In an interesting twist, the judge in the Krekar case seems to have re-established a de facto law against blasphemy in Norway. The Observer notes:

Lars Gule is the former would-be terrorist and multicultural lunatic extraordinaire. However, in this article he does come up with some good points about the verdict and the current levels of political correctness in Norwegian courtrooms.

(AP) In the verdict against Mullah Krekar, Judge Per Fleisje concluded that the two Kurds threatened by the defendant were themselves guilty of eliciting such a response from him.

Islamic scholar Lars Gule is highly critical of the court’s justification not to award compensation to the Kurds by stating that they were guilty of eliciting such a response from the defendant.

“The judge also referred to the Koran as a holy book, something he has no business doing. He could have said that the Koran is considered holy to Muslims,” says Lars Gule, head lecturer at Oslo University College. He also points out that Judge Per Fleisje referred to the burning of the Koran as a “deliberate provocation, and in the court’s opinion, completely unacceptable act.”

“What the court is saying here is that we ‘kind of’ have a blasphemy law in Norway. I don’t support the burning of the Koran, but I reject the idea that this should be made a criminal offense.”

Gule is sceptical to this aspect of the verdict.

“Norwegian courts are secular courts, and that means that they can’t define something as holy,” he says. He is pleased, however, that the judge made it absolutely clear that there is no room for Islamic law in Norwegian jurisprudence.

7 thoughts on “Mullah Krekar Bunged into Chokey for Five Years”