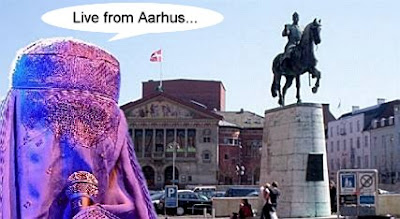 The antifas seem to have broken out and run wild during today’s DDL/EDL demo in Aarhus.

For the latest on the day’s events, see Tundra Tabloids, which has loads of photos and links.

Below is the live-blog up to now from Europe News. The latest entries are at the top:

16:32: about 12 norwegian Antifa protesters just got arrested next to the park

Rapper Marwan on stage + flag said: “We will fight their hate with our love”.

Young immigrants just trashed the whole street shopping carts stones and bottles flew through the air, as they tried to block the street. Police now chased the youths away.

16:24: Antifa/immigrant forces break up heavy sidewalk stones for use in their assault on the DDL/EDL demonstration.

16:22: Immigrant youth are in the side streets, shouting battle slogans.

16:18: Antifa forces have barricaded Grønnegade behind the park.

Correction: Immigrant forces. The barricade is now broken by the police.

Embarassing that Antifa, taking part in the demonstration for pluralism, cannot control themselves. They can’t reasonably say afterwards: “But the EDL provoked us!”

16:16: Even more Antifa and immigrant forces are reported to be heading for Mølleparken.

Yet more Antifa/immigrant forces are said to move towards the DDL/EDL demonstration.

Mølleparken, anti-Islam demo: police are Mølleparken. A group of 20 have taken up positions on the lawn, “I let no one through here,” reads the command from the group’s leader, but you can hear the clusters of young immigrants, shouting in the side streets to the wind farm.

16:04: Antifa has launched their all-out attack on DDL/EDL. From their Twitter feeds:

The police don’t haven’t got control. The main group that attacked EDL got away, a few were arrested.

A group of antifascist entered Mølleparken and attacked the EDL demo. Police have lost control of the situation.

16:04: Antifa attacked Mølleparken effectively, and says that the police have no control area. From Antifa Twitter feeds:

Police have no overview. The main group that attacked EDL escaped, some were arrested.

Press has been requested to leave the battlefield, police is bringing in reinforcements.

DDL/EDL members are reportedly trying to get away from the Antifa assaults. Police now in full battle gear, it is said that tear gas is being used against the attackers.

15:59: Some 200 Antifa and immigrant youths are attacking the EDL/DDL demonstration. Police struggle to hold them at bay.

15:52: Antifa attack the rally with fireworks and other missiles. The police are busy.

Antifa is launching an assault on the DDL/EDL demonstration. 150 are trying to force their way through from Vauxhall behind the park, police is fighting to hold them back. Antifa forces are said to be approching from other directions as well.

15:44: Antifa is trying to drown the DDL/EDL demonstration with noise, using also fireworks — firecrackers of a size not permitted in Denmark. A helicopter adds to the pandemonium.

Anders Gravers is now speaking. There are several reports of battles with Antifa, updating as possible.

15:33, Antifa Twitter: Shouting anti-fascist slogans ober Mølleparken. The police have moved them away from Møllestien, which now stands open.

A group of antifascists are at the river and shouting at EDL. EDL are trying to attack.Police are in the middle.

15:26, Antifa Twitter: Police presence on all streets leading to Mølleparken. Smaller groups of antifas have succeeded at going there.

15:16: Antifa Twitter: A group of antifascists Grupper af antifascister seeps from Bispetorv with direction towards the parks.

15:03, Antifa Twitter: A group of around 50 flying Palestinian flags are on their way towards Mølleparken. Police are trying to stop them.

15:13: Arabs drive by the demonstrations, shouting “ the Jews!”. Police do not interfere.

15:10: DDL/EDL have problems with the sound system. Antifa sabotage suspected.

Danish police seems solidly in control of the situation. In the picture above, they apparently have a “Friendly talk” with some potential troublemakers (lower left corner).

Demonstrant with nordic flag and EDL slogan “No surrender!”

Immigrants seeking to arm themselves with building materials, but gave up and put them back. Rune Eltard who took part in the attack on Foreign Minister Per Stig Moller in 2003, is present and supervises DDL / EDL demonstration.

Combined image of Anders Gravers and some banners from the European Freedom Initiative, Stop Sharia campaign, and Israeli flag.

Organizer Anders Gravers showing up, and banners from European Freedom Initiative, Stop Sharia, and the flag of Israel.

Kim Andersen, city council member for Venstre, a (nominally) centre/right party on DR: “Freedom of expression for extremists, BUT ….”

A group of Arabic looking young men are watching the demonstration in front of the art museum Aros, in company with Antifa types. It is reported that three of them have tried to penetrate the EDL demonstration, but were stopped by police. Police keep an eye on the group and ensures that it cannot attack the demo. Several small groups of immigrants are reported to be around the park.

WTF! TV2Østjylland are using the fascist Jacob C. Senholt as an “expert on the extreme right” on live TV.

The main demonstartion in Mølleparken is starting now. There are about 75 taking part, among them people with the Israeli, German and Norwegian flag. Antifa claim to have spread butyric acid in the park was false. Al-Jazeera reports demonstrationern.

Reasonably balanced speaker on DR regarding the EDL/DDL demonstrators attending the Mølleparken event. No mention or acknowledgment of the Israeli flags visible, but as with the communist flags at the counter demo, pictures hopefully tell the true story better than MSM reporters do.

7 thoughts on “Live-Blog From Aarhus”