As reported in last night’s news feed, a young Moroccan woman killed herself by eating rat poison after a judge forced her to marry her rapist.

Morocco is generally recognised as a country representing the acceptable face of ‘moderate’ Islam, but as Turkish Prime Minister Erdogan has stated, there is no moderate Islam, there is just Islam.

So it will only be the liberal apologists for Islam surprised by today’s story about a 16-year-old Moroccan girl named Amina Filali who committed suicide after she was forced to marry a man who had raped her.

Article 475 of the Moroccan penal code allows for the ‘kidnapper’ of a minor to marry his victim to escape prosecution, and it has been used to justify a traditional practice of making a rapist marry his victim to preserve the honour of the woman’s family.

The victim’s father said in an interview with an online Moroccan newspaper that it was the court officials who suggested the marriage option when they reported the rape. 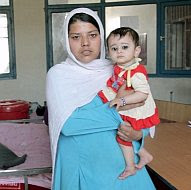 In many parts of the Middle East there is a tradition whereby a rapist can escape prosecution if he marries his victim, thereby restoring her honour. In cases of rape, the burden of proof is often on the victim, and if she can’t prove she was attacked, a woman risks being prosecuted for debauchery.

Don’t forget that our very own traitor-class politicians allow 85 sharia courts to operate in Britain, dealing in the main with ‘family issues’ and that some 17,000 incidents of Islamic Honour Violence in the UK were noted by the British police in 2008.

It really is high time our promoters of sharia woke up. These include David Cameron, Archbishop of Canterbury Rowan Williams and Britain’s most senior judge, Lord Chief Justice Phillips, who has stated he was willing to see sharia law operate in the country, so long as it did not conflict with the laws of England and Wales, or lead to the imposition of severe physical punishments.

Further details are available from The Guardian here and The Daily Mail here.

British Freedom’s point number seven of our 20 Point Plan exists to counter the rise of such terrible Islamic behaviour in the UK: “Halt and turn back all aspects of the Islamisation of Britain.”