Our Norwegian correspondent The Observer has translated an article from today’s BT.no about various threatening letters sent to members of the Norwegian Defence League. The article also describes a physical attack on a member of the NDL perpetrated by individuals from AFA earlier this year. The incidents occurred in the west-coast city of Bergen, the second-largest city in Norway. 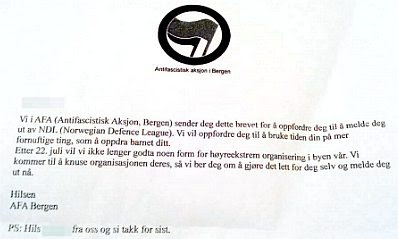 The letter at the top of the page reads:

We in AFA (Anti-fascist Action, Bergen) are sending you this letter to encourage you to leave the NDL (Norwegian Defence League). We would encourage you to spend your time on more sensible things, like raising your child. After 22 July we will no longer accept any right-wing organization in our city. We are going to crush your organization, so we are asking you to make it easier for yourself and leave the NDL now.

The text of the article itself:

“Thanks for last time,” the anti-fascist Action writes in the letter to the pregnant woman.

Two prominent members of the Norwegian Defence League (NDL) have received threatening letters from a group calling itself the Anti-Fascist Action in Bergen.

The two groups are positioned on opposite sides on the political spectrum. When The Norwegian Defence League held a secret inaugural meeting in Bergen in November last year, ten demonstrators from the organization ‘SOS Rasisme’ showed up.

“Focus on raising your child”

One of the recipients is a pregnant woman, and the letter refers to her unborn child. The two letters are almost identical.

“We would encourage you to spend your time on more sensible things, like raising your child,” the letter addressed to the woman says.

“After 22 July we will no longer accept any right-wing organization in our city. We are going to crush your organization … Greetings from AFA Bergen.”

Both recipients wish to remain anonymous out of consideration to their families and their own safety.

Refers to the assault

The letter concludes with a reference to an assault which took place in Bergen on January 3, and the sender has included the name of the victim in that particular incident.

“At first I thought I had received some sort of recruitment letter. It was quite strange. I’m scared, but not as scared as I was when I first received it. I always look over my shoulder and I don’t walk alone in the city at night anymore,” the woman says to bt.no.

She finds it hard to understand how they have managed to obtain the information about her pregnancy and her address.

“Hardly anyone knows where I live, only my family and my closest friends. And I have recently moved in to a new flat. They must be super-manipulative, or they have somehow managed to trick the National Register,” the woman says, and she emphasizes that she hasn’t published any of the information found in the letter on the Internet.

The other person who has been targeted says he is unaware of the identity of the sender.

“I’ve checked their website and I got the distinct impression that they are a group of shy people who don’t want any attention, but prefer to hide behind threats. And, as the recent assault case shows, they like to wear ski masks.”

No one else in the western chapter of the NDL has received letters or any type of inquiries.

The police in Bergen confirm that two formal complaints have been filed.

“One pertaining to an attack, and the other one to a threat. I can’t comment on the details, but we have reviewed the information and started investigations,” police superintendent Leif Havre tells bt.no.

“We are talking about two different cases, but we can’t rule out that there may be a connection here.

“I haven’t seen anything like this before,” he says.

He has no knowledge of Anti-Fascist Action in Bergen.

“We are in the initial stages of the investigation and it is too early to say whether we’ll contact the police in Oslo for additional information,” he says.

According to Wikipedia, Anti-fascist Action is an international network of militant anti-fascists who are influenced by various branches of communism and anarchism.

Bt.no has tried to get in touch with the organization, which is affiliated with the Blitz movement in Oslo. The group has its own website with an e-mail address and a telephone number, but none of them are working.

On the website the group writes that they don’t wish to draw “unwanted attention from the police or fascists, in order to keep them in the dark about what we’re up to.”

Hege Storhaug of Human Rights Service told bt.no that she was unaware that the group has established themselves in Bergen.

But BT has written about the organization before. That happened in 2008 after members handed out leaflets identifying a person as a Nazi, information which later on turned out to be incorrect. Back then the organization was described as having a “very random structure”.

The Norwegian Defense League first became known to the public at the end of 2010/11. It is inspired by the English Defence League (EDL), an organization that is known for violent street demonstrations in England. It is believed that Anders Breivik Behring had extensive contact with the EDL.

“We are a nonviolent organization. In this country we enjoy democracy and freedom of speech. No one from either side of the political spectrum should be able to take these freedoms away with violence,” the male recipient of the letter says.

He also believes that the letter can be linked to the attack on his friend.

The 25-year-old who was attacked by three masked men says he was “slightly shocked” when he heard about the reference to his own case. He is also a member of the Norwegian Defence League.

“It’s provocative and disgusting, and I am especially worried for the pregnant woman. I do hope the police catch them,” he says.

11 thoughts on “Threatened by the Anti-Fascists of Bergen”