Over the past week I’ve seen a number of articles and videos about the shouting-down of journalist Caroline Fourest at a Belgian university. Unfortunately, all the stories were in French, so nothing about the incident was posted here.

Takuan Seiyo has kindly written an account for Gates of Vienna about what happened, based on French-language sources, and includes a selection of relevant photos.

The Free University of Brussels is not free
By Takuan Seiyo

Accused of “Islamophobic racism,” the French writer-journalist Caroline Fourest was shouted down and prevented from speaking during a debate at the Free University of Brussels (ULB) on February 7th — though it was ULB that had invited her to discuss the “extreme right” in the debate. Fourest had to be whisked away by a security detail, to protect her from the wrath of some 40 Muslim partisans.

“A handful of keffieh and burqa-wearing zealots,” relays the portal
of the Belgian newspaper Le Soir, “came to silence a debate on the extreme right at ULB. The academic authorities declared their ‘consternation’ and ‘scandalization’ by this ‘attack against the freedom of expression’ committed at the University of Brussels, temple of debated ideas.”

Hold it right there. I know that un-PC speakers and writers who have been silenced and menaced are fighting for freedom of speech. But a society that wants to survive does not practice freedom of speech. Are there debates about the divinity of Jesus at universities in Saudi Arabia? Or about the merits of the British colonization of Hong Kong at universities in PR China? In the one, they want to remain Muslim; in the other, materialist-Confucian Chinese. Which should be fine with us. That we hold debates about Islam — a profoundly alien, lethally hostile ideology — and the integration of its practitioners in Western society, is a symptom of dementia that I would diagnose as compulsive cognitive Onanism. A nation that admits all ideas for endless debate believes in no ideas, and has no will to live.

Furthermore, the official name of the debate was “L’extrême droite, est-elle devenue fréquentable?” which translates loosely as “The Extreme Right; has it become touchable?” The debaters were Caroline Fourest and Hervé Hasquin. The moderator was Guy Haarscher. Fourest had taken positions critical of Islam, but she is a feminist, gay, anti-religious and anti-“racist” writer-activist who has criticized Tariq Ramadan, but also Marine Le Pen. Hasquin is a Wallonian politician and ULB historian well known for his liberal-secular views. Haarscher is a professor of law at ULB and to judge by the theme of his books (e.g. Karl Marx, Georg Lukács, Human Rights Law) no raving Rightist.

So who was representing the “extreme right” in this debate? If it’s either one of the three, that makes Leon Trotsky into “moderate right” and Pol Pot into “moderate left.” For ULB to shift the goal posts of “Extreme Right” in this way and to insinuate that it is untouchable makes mockery of the protestations of freedom of expression by the white post-Christian suits who represented ULB and the putative forces of reason in this event. Lastly, nothing is “free”: neither ideas in the PC/MC/neo-socialist Belgium nor the finances in a taxpayer-supported university. So the very name of ULB is sophistry.

The video embedded at the above link, and others posted on YouTube, are disappointing. One can’t see what Caroline Fourest was trying to say, there are ULB old suits on the stage addressing the young Mussulmans in the back who cannot be seen or heard clearly. Plus, concerning the latter neo-Belgians, it’s hard for me, having been taught classical French when Europe was still European and its civilization mattered, to understand their neo-socialist/mussulmanist Belgian duckspeak bouncing off bad acoustics. Apparently they were shouting Burqa bla-bla and various invectives.

But pictures are powerful. From a portfolio at lesoir.be , here is Caroline Fourest: 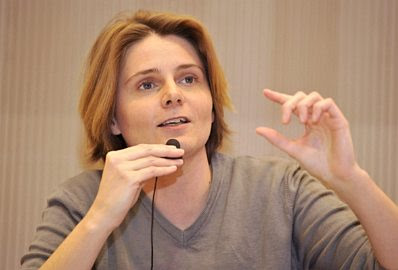 And here is the disapproving gallery. Note the rigid, fearful expression on the face of the paleo-Belgian woman in the upper right corner: 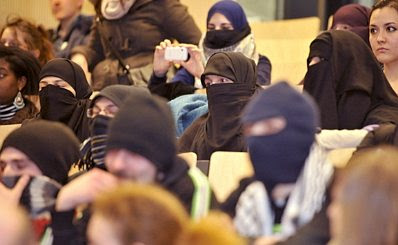 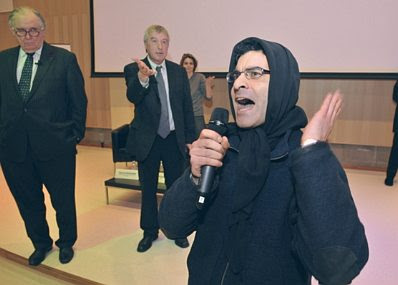 Who is Souhail Chichah, you will ask. And, if you still possess your own relatively uncontaminated brain, Why are there Belgians named Souhail Chichah?

Mr. Chichah is apparently a “Researcher in the Economics of Discrimination” employed by the University of Brussels on the melting euro of the much-abused Belgian taxpayer. The name implies Maghrebian origins and the face… well, I’ll leave it at that. Chichah was among the organizers as well as chief disrupters of this event, which is not surprising. Rationality, aptitude for reasoned argument, speech at bearable decibel levels unaided by wild gesticulation, these are the Euro-peoples’ traits developed over many centuries. They cannot be stapled automatically into each Eurabian passport. Which explains why the West’s ruling Body Snatchers who inflicted the Chichahs of this world on their serf populations came up with the necessary slogan that diversity is beautiful and, to complement that, indoctrinated three generations of autochthon students in the politics and manners of outraged useful idiocy.

Chichah had distinguished himself in the past by vociferous support for another symbol of the blessings of Eurabian diversity, an Afro-Islamic French anti-French clown named Dieudonné. The Belgian anti-Belgian “Researcher in the Economics of Discrimination” had signaled in advance in social media postings that he would organize a “stoning” of Caroline Fourest that should be joined by other Muslims in a display of “Burqa Pride.” Chichah’s partisans, relays the Belgian newspaper, express, like him, hate toward Israel and toward “Whites” (Le Soir‘s quotation marks, as though this were some bizarre, unheard-of term).

In a coda to this little drama, the ULB Alumni and Students’ associations condemned the Burqa bla-bla thing, expressing their “shame at the fascist methods in a house of Free Inquiry.” They and Prof. Haarscher invited Caroline Fourest to come back, and promised better protection. But Fourest said that she’d not come back, as she had been to conferences all over the world, and nothing of this sort had happened to her except in Belgium.

All of which leaves me with an odd taste, as though I’ve just bitten into a gypsum apple. Or witnessed the Queen of Hearts’ croquet game in a postmodern Wonderland. You know, with dhimmi-socialist premises and their practitioners as hedgehog balls and flamingo mallets, imported soldiers of Islam as both wickets and executioners, and the Mad Hatter making an appearance at the end to express his incomprehension why the event went awry, and singularly so. For variations of the Burqa bla-bla operetta are performed regularly on university campuses across the West.

In March 2009, the conservative columnist Don Feder was the subject of one at the University of Massachusetts at Amherst. In his case, the speech-nullifying bla-blaists were white lefto-homo-antifa zombies. A piquant detail is that Feder is Jewish, and one of the main hecklers wore a keffieh.

In February 2010, the Israeli Ambassador to the U.S. was heckled and prevented from completing his speech at UC Irvine in California. 11 Muslim hecklers were arrested. In the name of, of course, “avoiding divisiveness” and “healing”, 100 voluntary-dhimmi UC Irvine faculty members petitioned the District Attorney not to prosecute the hot-and-zealous protesters.

First they import the agents of divisiveness and then they lean on the victims of divisiveness. No healing will ever be possible for idiots who have shot themselves in the head with their own hand. 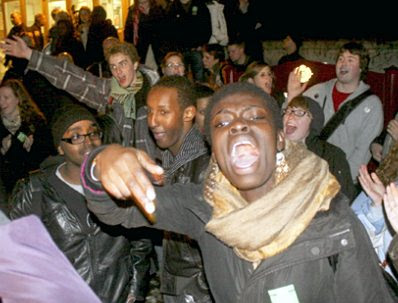 Coulter is a professional provocatrice (from “to provoke”), sort of a white equivalent of Dieudonné, except much more accomplished and easier on the eye. So on her first stop, at UWO, she told a pesky Muslim student to “take a camel” instead of the flying carpet she had previously suggested Muslims use for flight transportation.

Even before she arrived at the next venue, in Ontario, Coulter received a warning from the University of Ottawa provost, warning her: “Promoting hatred against any identifiable group would not only be considered inappropriate, but could in fact lead to criminal charges.” Ottawa’s police and university security advised of physical danger to the tall and politically provocative blonde. Ezra Levant, who along with Mark Steyn knows a thing or two about Canada’s whitey-only speech clamps, then advised Coulter to cancel her appearance. Which she did, but the riot erupted nonetheless, ubiquitous keffieh, screaming and all.

That Visible Minorities (as they are called in Canada) and their white Progressive amen corner are offended by Coulter is one thing. But how many screaming, screeching, violence-inflicting white Frenchmen, particularly Jews, silence in riotous manner the offensive anti-white, antisemitic provocateur, Dieudonné? How many gross acts of violence and intimidation by Muslim and dhimmi-Socialist campus zealots against pro-Israel Jewish and Christian students were prevented or adequately punished by solicitous campus administrators?

To ask these questions is to answer them.

Notice to ULB: next time you want to discuss the “extreme right,” invite a representative of its mildest strain, Ann Coulter.

9 thoughts on “The Free University of Brussels is Not Free”