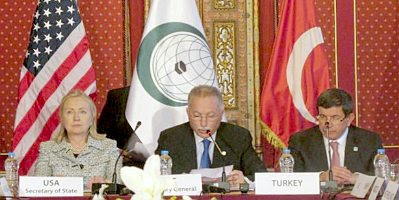 When I was a little kid and visited the doctor’s office, if the nurse was going to give me a shot she would smack my butt with her free hand just before the needle went in. I don’t know if it was to confuse my tiny nervous system, or whether there was some other rationale for the procedure. In any case, slapping the muscle first was supposed to make the shot hurt less.

The Organization of Islamic Cooperation is preparing to slap us later this week, so we can expect the needle soon afterwards. And guess who gets to play Big Nurse in the OIC’s surgery?

First, the report from Today’s Zaman:

OIC to Host Media Workshop in Fight Against Islamophobia

The Organization of Islamic Cooperation (OIC) has announced it will host a media workshop — the first of its kind — in Brussels on Feb. 15 and 16 for the development of media-related mechanisms to address smear campaigns against Islam in Western newspapers and other media institutions.

The media workshop will touch upon issues related to the negative representation of Islam in the Western media and will bring together Muslim and non-Muslim journalists, intellectuals, academics and civil society organization leaders to engage in in-depth discussions that will work towards the development of a stand against the misrepresentation of Islam in the media and the elimination discriminatory discourse and language.

This media outreach is, of course, part of the OIC’s Ten-Year Plan for eliminating Islamophobia:

The idea to organize a media workshop was first noted at the Mecca OIC Extraordinary Summit of 2005 and was shaped by the OIC Ten Year Programme of Action and the Islamic Conferences of Information Ministers (ICIM) in the years that followed. Workshop participants will discuss at length the reasons behind and the results of the Western media’s offensive campaigns directed against the symbols and sanctities of Islam and Muslims, which still occur from time to time, and how to address the issue.

We are now seven years into the Plan, and time’s a-wastin’! So this “workshop” is designed to help purge the media of what little Islam-critical thinking remains to them.

The workshop is of particular importance as it will be held only weeks before the convening of the UN Human Rights Council in Geneva in March, which will put Resolution 16/18 to a vote for the second time after its unanimous endorsement in the previous session.

Resolution 16/18 aims to combat intolerance, stereotyping, stigmatization, discrimination, incitement to violence and violence against individuals based on religion or belief. The resolution is the outcome of bilateral talks between the OIC and a number of Western countries, including the US. The statement noted two meetings between the OIC and the US, held in İstanbul and Washington, to discuss this issue in order to develop operational mechanisms to implement the resolution at the level of the UN.

We all know what “intolerance, stereotyping, stigmatization, [and] discrimination” mean: they mean any form of criticism of Islam. Stating the plain facts, reading from the Koran, quoting an authoritative hadith — all of these may “stigmatize” Islam, even if they are true.

It’s hard for a Westerner to wrap his brain around the idea, but this is exactly what Islamic law says. Saying anything that tends to harm Islam is a form of blasphemy, and is forbidden. Since telling the truth about what Islam actually says is harmful to Islam, truth-telling is haram — until you’re safely a Muslim, that is, and ready to hear it.

The OIC’s goal is to slap us with all this so as to get our cooperation while they slip the needle in:

The two-day workshop will take the form of a series of brainstorming sessions to develop mechanisms for cooperation with external partners and to develop an action plan to address the phenomenon of Islamophobia. The recommendations of the media workshop will be presented at the 9th Session of the ICIM, which will be held in Libreville, Gabon, in April for endorsement and implementation.

They will brainstorm with us, and the end result will be a mechanism that will eliminate the last vestiges of any free speech when the topic is Islam. This has already been accomplished for the most part in Europe — witness what just happened to Elisabeth Sabaditsch-Wolff — but the USA will require a bit more work.

That’s where Big Nurse comes in.

Most of the reports about the upcoming OIC workshop use similar wording, and are obviously drawn from the same press release. But Bernama has this little tidbit that should make Americans sit up and take notice:

“The workshop will represent a quantum leap in media action, as it discusses, beyond rhetoric, the practical steps to address the phenomenon of Islamophobia,” the OIC said.

Reports say Resolution 16/18, which was adopted by the United Nations Human Rights Council in Geneva in March 2011, was backed by U.S. Secretary of State Hillary Clinton at the most recent Istanbul Process Conference in Washington in December. [emphasis added]

That’s right: Hillary wants to remove the last of your First Amendment rights. It will be a tough job, but with a supine Congress and a compliant Supreme Court, anything is possible.

How much do you want to bet it will follow the Pentagon model, and stress that the restrictions on our freedom are necessary for our national security, in order to win the “War on Terror”?

After all, when we express “Islamophobic” views, we help create new terrorists by driving “moderate” Muslims to become “extremists”.

This is widely viewed as a significant step forward in OIC efforts to advance the international legal concept of defaming Islam.

And indeed it is.

Are you ready? Hold still!

Note: Vlad has his own take on this topic, including a video that many readers will want to see. I mean, really want to see.

6 thoughts on “First Comes the Slap…”