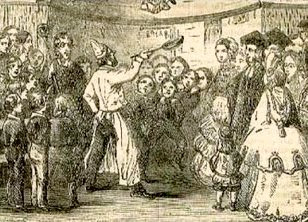 I spent several hours away from my desk this afternoon and evening, which is why tonight’s posts have been delayed.

The occasion was Pancake Supper, an annual event at our church and an Anglican tradition on Shrove Tuesday. Part of the tradition (at least at our church) is that the men cook the pancakes, so I smelled like grease smoke and had to be thoroughly detoxified after spending four hours preparing, cooking, and cleaning up after all those pancakes.

Our church is small and aged, and the crowd at supper was made up mostly of people over sixty. This was true even though many of them were actually Methodists and Baptists from other churches in our small rural community. Going to Pancake Supper at the Episcopal Church seems to be a quaint artifact from a distant past, when Episcopalians — members of what was once called the “Church of Virginia”, back before independence — were the religious aristocracy in the Commonwealth.

One of the delightful features of our Pancake Supper is a small ensemble that plays traditional “Old Time” music while people eat. Tonight’s group included two guitars and a fiddle, with one of the guitarists singing. While I was in the kitchen cooking I heard “Amazing Grace”, “Long Black Veil”, “Tennesee Waltz”, “The Old Rugged Cross”, “Rocky Top”, “Good Ol’ Mountain Dew” (or whatever that song about Uncle Bill’s still is called), and numerous other favorites, most of them audience requests. Some people even got up and clapped their hands and stomped a little bit.

Notice that the musicians’ repertoire wasn’t what is normally associated with hidebound narrow-minded bigoted Christians in the rural South, as imagined by the urban literati who create the popular stereotypes of country people that city folk and foreigners take to be the truth. There were songs about God and Jesus, but also songs about love, and cheatin’, and whiskey, and temptation.

The songs were about the difficult business of being fully human, with all its richness and complexity and ambivalence. They just happened to be presented in an aesthetic form that is derogated by the culture at large.

All this, plus pancakes, link sausage, and applesauce! What more could anyone want?

The traditional rural Virginian milieu is so different from my other life that it’s hard to describe. My career as an “Islamophobe” — which involves research and writing aimed at English-speaking people all over the world, trips to Europe, and all those other effete intellectual activities — doesn’t really overlap with what went on in that smoky parish hall tonight. Nobody in that room would have a clue about the Counterjihad, even if they knew about my role in it.

Yet these are my people. This is home. This is why I do what I do.

This is what I fight for.