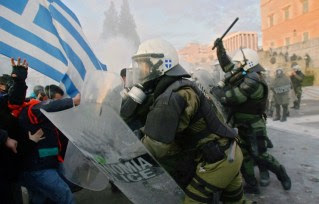 Greece was the cradle of democracy, and apparently will also be its grave.

The following article describes what is happening in Greece in the wake of the EU-mandated “austerity” agreement that was coerced from Greece as a condition for receiving the next tranche of debt relief from the European Central Bank.

Many thanks to JLH for the translation from SOS-Österreich. Pay special attention to the letter sent by a Greek to SOS concerning official provocation and repression during the riots in Athens:

Following approval of the credit agreement by the Greek parliament, the parties expelled 45 representatives for disregarding party orders.

The draft law on the credit agreement and the accompanying package of new, draconian savings measures (“moratorium”) was finally passed with 199 votes.

The expulsion of the 22 representatives was communicated to parliamentary chair Filippos Petsalnikos directly after the vote by party leader Giorgos Papandreou. Mr. Papandreou included all those who voted against the resolution or did not vote or abstained.

“After a long time, I voted my conscience. They expelled me from PASOK, but they cannot wipe out either my opinion or my path.” (an ex-representative)

We also share the following letter from the same source with our readers:

Maybe now you understand what we have been shouting all along. There is no democracy here.

Freedom of expression has become a foreign word. You feel that especially well if you live in Athens.

We have repeatedly shown our representatives our opinion by demonstrating peacefully.

Every time, we have undergone chemical warfare, Tons of tear gas. Do not believe that the rioters are demonstrators. It is an open secret that they are police dressed as civilians.

They provoke the police (their colleagues) to give them a reason for using the tear gas. Was it demonstrators who set Athens on fire yesterday? Which of us wanted to destroy the National Library? Yesterday on Syntagma Square there were many ordinary people, including grandmas and grandpas and little children. The state is doing everything possible to frighten us.

I can naturally only tell of what I experienced. Since I am a teacher, I participate in the teachers’ blog at the demonstrations. We were attacked several times. Apparently because our blog is mostly women and it is easier to beat women. It is usually the same people: dressed in black, faces covered (why is that?) and with sticks in their hands. Suddenly, they came into our blog and beat us brutally. My God, we are not criminals, we deal with children. Another time during a demonstration they came into our organization’s building near Syntagma Square and attacked us. This time it was police in uniform. They stood at our entrance and gave us regular doses of tear gas. They threw stones at us. Two of us were injured — one on the neck and one on the ribs. We were kept in the building for three hours, nearly suffocated, and they kept us from reaching the ambulances we had called for. So do not believe that it is the demonstrators who want to destroy the city.

11 thoughts on “Democracy Ends Where it Began”