Our Quarterly Fundraiser is a grueling process, but it has its advantages. Under normal circumstances I am constrained by the contents of a translated article, or by a topical news item. During the fundraiser, however, I can hold forth at length about whatever I like.

Provided, that is, that I stay within the loose parameters of the particular fundraiser’s theme. Which, in the winter of 2012, is “Frugality”.

Dymphna and I were batting around ideas for these posts the other day, and our discussions brought to mind a popular tune out of my dim and distant past. Readers of a certain age will recall a song by the Playmates entitled “Beep Beep!”, which made the Hit Parade in about 1960.

I loved that song. I bought a 45 rpm single of it played it over and over again, so that even now, fifty-odd years later, I remember every note, every syllable.

The conceit was that the singer was a Cadillac owner, and an upstart driver of a “little Nash-Rambler” had the temerity to outrun the Cadillac — merely to ask advice on how to get his car out of second gear!

The connection with frugality is this: back in the 1950s, a Cadillac was the apotheosis of ostentatious luxury in cars. The Nash-Rambler (a merger between two originally separate brands, Nash and Rambler) was the opposite: a plebeian car, a quotidian conveyance worthy of scorn. Only poor people (or thrifty people) would own a Rambler.

A Nash-Rambler was entirely without status. If you wanted to hold your head up in the world, you drove a Buick, or better yet a Cadillac, or — swoon! — a Rolls-Royce.

But no one with any self-respect owned a Rambler. Not voluntarily.

Our family was a Rambler family. The first in the series was a 1952 model, which threw a rod or something, and had to be replaced with a (very similar) 1954 sedan. That one was a Wednesday car, and remained in the family for ten years, staying with us after we bought a 1960 Rambler American station wagon (and thus became a two-car family) until we sold it and bought a 1964 Rambler American four-door sedan. We carried the latter car to England, and brought it home again, after which we bought a 1970 Ambassador.

About that time Rambler was bought by American Motors, and the final AMC car in the family was a 1971 Hornet, which I acquired from my mother when I reached my majority. I drove it until it died in 1988.

My point is that we were a Rambler family, which meant that we were not concerned with prestige or status, but with economy, and, well, frugality.

Ramblers were for thrifty people, for the Uncle Scrooges of the automotive market. Status-seekers bought Chryslers or Lincolns and traded up for the newest model every two years. Rambler people bought their cars and kept them. They worked on the engines themselves, and drove the cars until they died — until after the clock had turned over once or twice, and they finally gave up the ghost.

Despite our choice of automotive conveyance, we were not a poor family. My father was an employee of the federal government, and we did quite well. We owned a nice split-level house in the suburbs of D.C., and we even had a TV when a lot of other less fortunate families were still getting by with a Philco radio set. 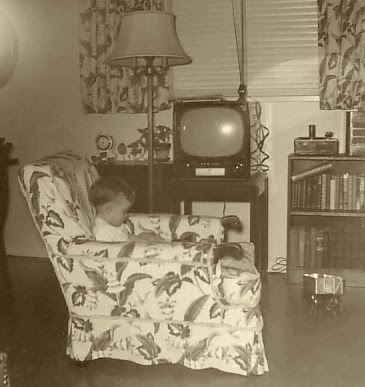 The above photo shows the then-future Baron, ca. 1952. Look at that television set! Doesn’t it look frugal?

But it wasn’t, actually. Back then that was the only kind of TV there was. If you were frugal, you had a radio.

I remember that TV well. We kept it into the 1960s, when we got a new TV, and the other one became the old TV, and lived in the family room. But both TVs had rabbit-ears, which had to be adjusted to get the best reception.

We could get four channels on those TVs. Three were D.C. area network franchises — Channel 4 (WRC, NBC), Channel 7 (WMAL, ABC), and Channel 9 (WTOP, CBS). The other channel was 5, Metromedia (WTTG). An independent, not a network station. Horrors!

Four channels using rabbit ears. Cable was for people who lived on the Eastern Shore, beyond broadcast range. Ah, how times have changed!

Our frugality was reinforced on both sides of the family by our heritage. My mother carried a large measure of Scots in her background. My father was a Yankee, and had that chintzy nature for which Yankees are renowned.

But my parents didn’t really stint the kids. We lived well, and after my father was stationed in England we were able to travel. The photo below was taken on a (British) tour of Egypt in the summer of 1968, after I finished my O-levels and before I started my A-levels: 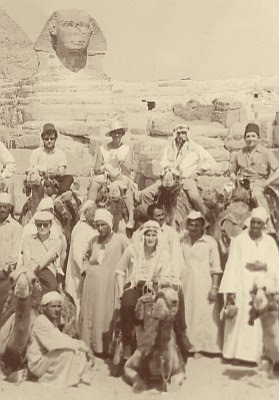 Your correspondent is in the front row, astride the kneeling camel and wearing a burnoose.

At the upper left, just below the Sphinx, with the fez and the shades, is my elder brother, the Grand Duke Argeneld of Bodissey (who renounced his claim to the barony in 1971 in exchange for a case of Rolling Rock).

With me in the front row, left to right, are an Irish Catholic priest whose name I can’t recall, and then our trusted assistants Mohammed, Mahmud, Mohamed, Mehmet, and Mohamet.

That was a vacation to remember! One evening in Luxor, after a particularly parched tour of the tombs in the Valley of the Kings, Argeneld and I were unable to resist the pitcher of chilled water that our waiter placed in the middle of our table. We each drank a glass of cool refreshment, and regretted it for the rest of the trip, through Beirut and Jerusalem — although we had more or less recovered by the time we got to Cyprus.

I see that I’ve lost the frugality thread somehow. Dymphna will have to take it up again tomorrow.

In the meantime, here’s the geographic breakdown of donors for the first day of our winter fundraiser:

Australia, Denmark, Norway, and the UK

Many thanks to all of you! Your repeated generosity is gratifying — what a crew of recidivists you are!