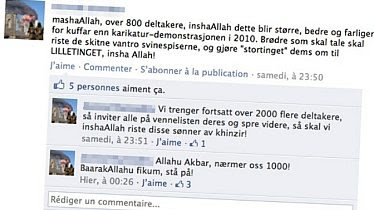 Our Norwegian correspondent The Observer sends this translation of an article about an Islamic Facebook group in Norway whose members intend to stage a demonstration outside the Norwegian parliament later this month.

From the Norwegian state broadcaster NRK:

They believe that all Norwegians are guilty of “massacres of innocents” in Afghanistan, they cheer when NATO soldiers are killed, they praise terrorists, and on 20 January they will demonstrate in Oslo

“The brothers who are going to speak at the demonstration are going to shake the dirty infidel pork-eaters, and make their Storting [ting means Parliament, stor means big] into the Lilletinget [lille means little].

This event is organized by Muslims, it is intended for Muslims, and it is a demonstration against Norway’s participation in the occupation of Afghanistan and the massacre of Muslims.”

“Americans, including civilians, should be killed by Muslims anywhere in the world.”

The statements above are posted on the Facebook group “Demonstration: Norwegian troops out of Afghanistan.”

Have been given permission

The Norwegian Parliament has confirmed to NRK.no that they have granted permission for the staging of a demonstration against the war in Afghanistan at Løvebakken [area in front of the entrance to the Parliament] on January 20.

NRK.no first became aware of the Facebook group when it was discovered that some of the members organizing the event are also responsible for some the internet harassment of Louiza Louhibi, a rape victim who decided to go public with her story after she was raped last autumn.

On Facebook Louiza Louhibi was told that she deserved to be raped because she left Islam. The 21-year-old rape victim is now fighting against what she calls internet extremism.

Several of the Facebook profiles that were responsible for this harassment have now been deleted, but extreme views are still published at the website owned by the organizers of the planned demonstration.

They praise the killing of NATO soldiers and express revulsion against the “infidel” Norwegians.

There are also religious discussions on the Facebook page, where influential members express a very strict interpretation of Islam.

However, several members of the group have voiced concerns that the demonstration is “un-Islamic.” The person who created the Facebook profile, on the other hand, gives assurance that the event will go peacefully, and that women and men will be kept separate.

It is unclear who is behind this Facebook group and the planned demonstration.

It is also unclear whether an organized group is behind it. According to information that NRK.no has received, the organizers consist of a loose network of between five to fifteen individuals who are active on various social network groups.

Does not wish to reveal identity

NRK.no has been in e-mail correspondence with someone claiming to be one of the organizers, but the individual refuses to reveal his identity.

This individual has responded to several of our questions, but he will only let us use the quotes provided everything he writes is published — including religious incitement.

NRK.no has therefore chosen not to use quotes in an editorial context, but the statements are attached.

The Facebook group currently has 1,238 members, but several of those have been added without the members’ consent.

One of them is writer and social commentator Mahmona Khan.

“What? I’m a member of this group?” she asked when NRK.no contacted her. After visiting the webpage and checking it out, she immediately removed her profile from it.

“These are views that that I do not support, and I had no idea that I was a member of this group,” she says

Encouraged people to leave the group

Louiza Louhibi was also a member of the group for a brief period, but she was unaware of the views that were advocated there.

“I wrote a post in which I encouraged people to organize a demonstration against the war, one that didn’t just cater to the extremists,” she says.

“It is quite obvious that this is a small group that have misunderstood Islam, and that they are more concerned about calling Norway a kuffar (infidels — editor) nation than criticizing Norway’s involvement in Afghanistan,” she wrote in her post.

Louhibi’s encouragement for users to leave the group did not go down well, and she says that the harassment from some of the members increased in intensity.

“They sent a number of private messages to me on Facebook, and several of those were of a harassing character,” she says.

Louhibi’s strategy in combating what she sees as extremists’ networks is to respond to them.

“I try to be polite and respond with facts,” she says.

Louhibi says that some of the people who harassed her have since apologized.

“I don’t find them threatening so long as they answer in a civilized tone,” she says.

“I sent them an e-mail, thinking that they should be made aware of the group,” she says.

Martin Bernsen, spokesperson for the PST, tells NRK.no that on general principle the PST doesn’t comment on specific cases such as this one.

But he says that:

“Social network groups have in recent years evolved into a place where extreme attitudes are disseminated, and the PST will increase its focus on these groups in the future.”

The PST deals primarily with specific threats against government officials and national targets, but they also monitor various groups.