The city of Hamburg is the first federal administrative unit in Germany to make a treaty with its Muslim community.

Many thanks to JLH for translating this piece from Citizen Times: 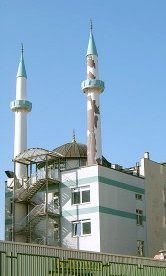 As reported at the Wedel-Schulauer Tageblatt blog, Hamburg is about to be the first federal state to conclude an agreement with three Muslim umbrella organizations: Shura (Council of Islamic Communities), DITIB (Turkish-Islamic Community) and the Organization of Islamic Culture Centers (VKZ). Questions such as mosque construction, religious funerals, Islamic religious instruction and the administration of day care centers will be regulated. The goal is to have the agreement in effect before summer break, said Hamburg spokesman Jörg Schmoll.

The agreement goes back to suggestions in 2006 and then mayor Ole von Beust (CDU). But in contrast to the two large Christian congregations and the Jewish community, Muslims are not organized in a public, legal entity. So there has been no partner for the Hamburg senate that can speak for all Muslims.

“We regard ourselves as representatives of nearly all Muslims in Hamburg and as such would gladly assume the role of negotiating partner,” Zeceriya Altug, chair of DITIB North says to Welt Online. From the official side and by many Muslims, however, this is doubted, indeed, contested. For instance, DITIB is regarded as the religious-political arm in Germany of Turkish Premier Erdogan. In the German-Islamic Conference (DIK)*, for this reason, prominent individuals of Muslim extraction are always included.

Integration policy spokesman for the SPD, Kazim Abaci, says that it is still doubtful whether an agreement will come out of the talks. The crucial political point remains whether organizations qualify as religious communities in the sense of the constitution. A further problem: Sunnis, Shi’ites and Alevites have a difficult time finding a theological consensus.

Equality within and without?

Since yesterday a draft by the organizations is before Hamburg’s citizen parties. A Welt Online commentary reports it as a “symbolic milestone on the way to equal rights.” The paper in fact speaks of the acceptance of all arrangements within the faith community, explicitly also concerning homosexuals. What does not seem to occur to Welt writer Eva Eusterhus is that this version allows recognition of homosexuals only within the umma — the greater Muslim community.

The ordinary citizen cannot view the paper on the websites of the Islamic organizations mentioned. Transparency is apparently not seen as a part of integration.

In recent days, Hamburg Muslims have made negative headlines several times. For one thing, the founding of an Islamic ride-sharing central, Muslim Taxi, became known. Against the equal rights described here, this intends strict separation of the sexes and is supposed to make possible the conversion of infidel German passengers. For another thing, a Hamburg Muslim woman has let it be known that she intends to open a purely Islamic business center.

The Hamburg mosques have been under surveillance by security services repeatedly in recent years, because they were active meeting places for Islamists. The Al-Quds Mosque, where the attackers of September 11, 2001 met, was closed in August 2010 by the security services because Islamic activities were observed there on a continuing basis.

One thought on “Dubious Privileges for Islam in Hamburg”