As reported here earlier this morning, the lower court’s “hate speech” verdict against Elisabeth Sabaditsch-Wolff has been upheld. The judge ruled that the fine should be lowered, however, and sent the case back to a lower court for final adjudication. 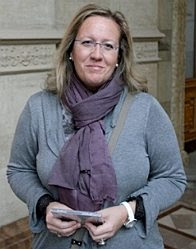 I spoke to Elisabeth on the phone a few minutes ago, and she told me that there is another avenue of appeal within Austria, which she doesn’t entirely understand. She will be consulting with her lawyer on the matter. If that approach fails, she may appeal the verdict to the European Court of Human Rights, although any judgment at the ECHR will have no bearing on the implementation of the sentence in Austria.

Elisabeth’s legal expenses during this process will be considerable, and for that reason we are reactivating the appeal for “Elisabeth’s Voice”. The case should have been over long ago, but the wheels of Austrian “justice” turn slowly. Her supporters on both sides of the Atlantic have been generous, but we must ask them to reach into their pockets once again.

Anyone who wants to contribute may visit Elisabeth’s Voice and make a donation using PayPal. Or, if you prefer, you may send a bank transfer using the following information for international payments:

Made out to: Public Notary Mag. Martin Scheichenbauer, Hemmaweg 5, A-9342 Gurk

At the press conference afterwards, Elisabeth said she was appalled by the verdict. “This is a dark day in Austrian history,” she said. “I am ashamed to be Austrian, for the first time in my life. Austria no longer has freedom of speech.”

Der Standard has posted an article on the verdict (in German).

In due course Elisabeth will be writing her own report on today’s events. But one thing is certain: she is adamant that she will not pay the fine, not even if the court lowers it to one euro.