Elisabeth Sabaditsch-Wolff sends the following New Year’s message to everyone who has supported her over the last two years. 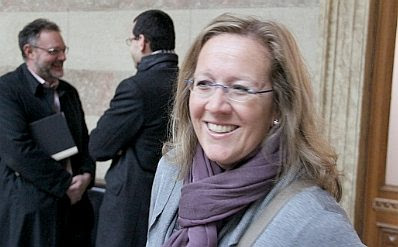 As many of you know, Sunday December 20 was a dark day for freedom of speech.

The Austrian justice system decided that the truth may not be spoken if it is deemed “excessive” (nota bene: and thus “denigrating” from the point of view of pious Muslims). Although the verdict was shocking, it did not come as a surprise.

Before I continue with my thoughts about the impact and implications of the ruling, I want to thank a few people:

First of all, my deepest gratitude to my unwaveringly supportive husband. He has stood behind me and continues to do, so despite the fact that his wife is now a convict. Without him, I could not have survived this ordeal.

Next comes my beautiful, caring daughter, the light of my life, for whom I have decided to fight. She and all girls are the future, our future: she will have to live in the world we shape now. She will one day judge our accomplishments because she will have to live with the consequences. And it is for my daughter and all of your daughters that I will continue.

The rest of my family has also been extremely supportive, especially my father — who, when I started this journey, believed that Islam is a religion we must respect. He has come a long way since then. Kudos to him for having the courage to learn. I wish more would follow in his footsteps.

Once again, I thank my lawyer, Dr. Rami, for his incredible work. When I first entered his office back in November 2009, he probably knew as much about Islam as the rest of the population — which is not much. Two years and many books later, he has become an expert. And he has done magnificent work in organizing my defense — which, by extension, is a defense of our right to freedom of speech.

What would I do without the unflinching help and support of Baron Bodissey and the Gates of Vienna community? What a difficult year lies behind Gates of Vienna, and Baron and Dymphna are have not given up, and are not giving in. We have lost a few friends during the storm, but so many new friendships have been made. There is reason for optimism. Please continue your support of Gates of Vienna, the beacon of free speech in an angry ocean of lies and misinformation.

It goes without saying that my deepest gratitude also extends to the associated networks. These include, but are not limited to, EuropeNews, PI-News, SOS Österreich, ACT! For America, and Vlad Tepes. The larger network also includes the countless translators who give up their free time to make this and so many other stories available to the English-speaking world — not to mention those parts of the world that speak Danish, Dutch, Swedish, Finnish, French, Italian, and all the other languages in which the information has spread.

A heartfelt “God bless you” to all of you who organized prayer groups, lit a candle for me in church, or prayed for me in a synagogue. Although I do not fathom God’s will right now, I don’t have to. There is a reason for all of this, and by going on, by not giving up, I will one day be able to understand His plans.

To all of you who drove and flew to Vienna, to you who took a day off from work to stand with me on this day: THANK YOU. Your presence meant more to me than you will ever know.

I will now comment very briefly on the verdict.

I must admit that I entered the courtroom with some cautious optimism. However, when I sat down to face the presiding judge, with another nameless judge on his left and right, I knew in my heart that the verdict once again had already been written, as it was from the day of my indictment.

Let’s be honest: from the very beginning we freedom-loving men and women, we who seek to defend democracy and universal human rights, never had a chance. The destruction of everything we stand up for is too far advanced.

For those of you wondering what the verdict was and its implications, here a short summary.

The initial verdict found me NOT GUILTY on the count of hate speech.

It did, however, find me guilty of “denigrating the religious teachings of a legally recognized religion” because I had said that “Mohammed had a thing for little girls”, and that his behavior can be described as “pedophilia” for want of a better word. I was sentenced to a fine of €480 (i.e. 1/3 of the maximum sentence) and two months jail if I refused to pay.

The appeals court verdict is interesting, but even more shocking. The judge explained that while it is certainly within the law to say that “Mohammed had sex with a 9-year-old”, calling this spade a spade is considered “excessive” and thus “denigrating”. Imagine that you were no longer allowed to call a murderer “heinous” because you might be convicted of having an “excessive” opinion as a result.

Here in Austria we are no longer permitted to name the crime committed by the founder of a religion, in whose name (according to Koran 33:21, Mohammed is the perfect example to be emulated by all Muslims) millions of young girls are married off and raped by their “husbands”. This is an unbearable thought for me, as the mother of a young girl. And it is an unacceptable situation, one I shall fight till the very end.

However, at this point I cannot tell you how I will continue this fight, as I have not heard from my lawyer. We have to wait for the written verdict first, after which we can decide on a strategy, for both the battle inside the courtroom as well as outside. I thus ask you to bear with me until my legal team, my family, and my confidants present the details of what I should do next. I can assure you that I will not stop, for stopping would mean surrendering to the application of sharia law here in Austria, which is something I will never, ever do.

Paraphrasing Congressman Allen West’s words: “I will remain steadfast in my opinions and loyal to my family and my beloved Austria.”

Finally, a word to Ms. Dolna, to whom I must be grateful for “exposing” me to the world. Ms. Dolna, I was told that you laughed when the verdict was announced. I say to you: “Father, forgive her for she knows not what she did.”

To all of you out there, near or far, I thank you from the bottom of my heart for your continued support and the love you extend to me. I hope you had a very Merry Christmas, and I wish you a peaceful New Year.

12 thoughts on ““I Will Remain Steadfast””