Some parents of children at a Norwegian primary school were undisturbed by the scrubbing of traditional Christmas content from these year’s school celebration — which has been renamed “Winter Marking”. But others were upset that their children were forced to take off their traditional red caps and miss the customary visit by Santa Claus.

Our Norwegian correspondent PN has translated an article about the controversy from VG.no. The translator includes this note:

The comment board — which requires you to be logged in on Facebook, posting with full name — is full of rage from parents and people of all cultures and religions, excepting the odd troll and religious nut, of course.

Fifth-graders at Øren school in Drammen were invited to a Christmas celebration to end the school term, but ended up with “Winter Marking” and were not allowed to wear red caps [nisselue, traditional/national red cap symbolic of Norway—translator]. 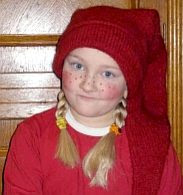 Several of the children had dressed up with red caps and Christmas dresses. This did not go down well.

“The pupils were informed by the teacher that they were not to wear red caps. My daughter and several other children decided not to listen to that order and came wearing a red cap. She was then told to remove the cap as she had to consider all those with a different culture and faith,” says Vibeke Alm Thoen to VG Nett.

After everyone arrived and the teachers had welcomed them, they clearly stated that from now on it would no longer be called a Christmas celebration, but should be named Winter Marking.

Several of the children had dressed up with both caps and red freckles, and were of course greatly disappointed when they were told there would be no Christmas carols sung.

“I think this whole thing is strange and the message came as a surprise to most parents. It’s surreal that they sang Trond Viggo Torgersen’s “Tenke sjæl” [song title: Think for yourself — translator]. There is nothing religious behind Santa Claus; the school should know that,” says Alm Thoen. To VG Nett she says that she has had children at the school for fourteen years, but has never experienced anything similar.

“I think its straight up nasty that the kids are told to take off their caps. This doesn’t belong anywhere,” says Alm Thoen.

School principal Tove Fredriksen at Øren school rejects that they are censoring away the Norwegian Christmas traditions from the school content.

“I wasn’t there myself, but according to one of the teachers this was a completely ordinary Christmas celebration. The teachers and students had in advance agreed that this was not to be a nissefest [Santa Claus celebration — translator],” says the principal.

The leader of the parental advisory board Tone Mette Pytte thinks it’s up to each class how they choose to celebrate end of term before Christmas. She herself is the mother of a pupil in the 5th grade, and think it was a nice celebration.

“Now i think we should focus more on the children’s performance during the celebration, instead of whether or not there were red caps,” she says.

19 thoughts on “A Norwegian Christmas — Not!”