Geert Wilders spoke out today in support of Elisabeth Sabaditsch-Wolff, expressing his outrage at the Austrian court for upholding her conviction.

The following article appeared in today’s Elsevier. Many thanks to our Dutch correspondent BD for the translation: 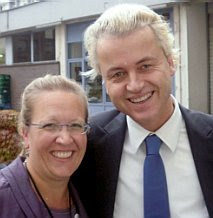 On the weblog Gates of Vienna PVV-leader Wilders called Sabaditsch-Wolff a brave woman and a beacon of light. Not only for Austria, but for the whole Western world.

Elisabeth Sabaditsch-Wolff was convicted today [actually on Tuesday December 20 — BB] in an appeal court to a fine of €480 for her statements about the prophet Mohammed.

In 2009, the political activist denounced the sexual relationship between the Islamic prophet Mohammed and a nine-year-old girl.

Sabaditsch-Wolff did this during a meeting of the youth section of the Austrian freedom party FPÖ. She stated that Mohammed was “a relatively major womanizer” who, according to the Koran, also sex had with children.

The Austrian court, which based its verdict on European jurisprudence, ruled that freedom of opinion has to take the duty not offend others into account.

Sabaditsch-Wolff was allowed to say that Mohammed had had sex with children, said the court, but the sneering tone in which she did this is insulting and hence punishable.

Wilders totally disagrees. “A ludicrous verdict. Apparently she is allowed to say that the barbarian Mohammed is a pedophile but not in a sneering way. It is, however, the truth.”

According to the PVV leader the European countries “urgently” need a First Amendment, similar to the Constitution of the United States.

The Article prohibits Congress from adopting laws which create a state religion or put one religion above another, or which restrict the right to freedom of religion, freedom of opinion, freedom of the press or the freedom to assemble.

10 thoughts on ““A Ludicrous Verdict””