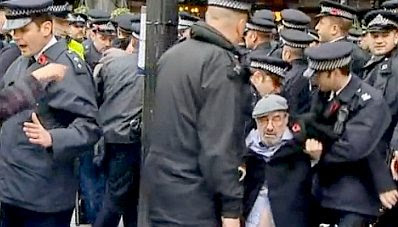 I saw the Prince of Darkness, with his Staff,
Standing bare-headed by the Cenotaph:
Unostentatious and respectful, there
He stood, and offered up the following prayer…

— From “At the Cenotaph” by Siegfried Sassoon

As reported in last night’s news feed, the radical British Islamic group Muslims Against Crusades was banned yesterday by the Home Office. The premises of its leader, the notorious firebrand Anjem Choudary, were then raided by police. For the time being — until it can regenerate itself under yet another name — MAC and Mr. Choudary are out of business.

The Choudary crew were planning another poppy-burning and soldier-reviling fest in London today during the solemn ceremonies of Remembrance Day, and their removal from the scene left the Metropolitan Police all dressed up with nowhere to go. Rather than have all those police vans and riot gear and overtime go to waste, the boys in blue decided to crack down on the English Defence League instead. The EDL didn’t actually do anything wrong, but the police felt obliged to arrest a couple of hundred of them to “prevent a breach of the peace”.

170 Members of English Defence League Arrested Near Cenotaph in London

More than 170 members of the right-wing English Defence League (EDL) have been arrested near an Armistice Day ceremony in central London amid fears they were trying to target anti-capitalists camped in the city.

Scotland Yard said the group were detained “to prevent a breach of the peace” at a pub near the Cenotaph in Whitehall.

A police source said it was believed the group were heading towards the anti-capitalist “Occupy” protest camp outside St Paul’s Cathedral, set up last month after being inspired by the “Occupy Wall Street” movement.

That is, the EDL people were arrested because, in the esteemed judgment of Scotland Yard, they just might do something bad when they encountered the legions of the unwashed in front of St. Paul’s.

The Met acknowledged that no member of the EDL had broken the law or done anything violent:

“170+ supporters of EDL were arrested this p.m. to prevent a breach of the peace,” the Met Police said on its Twitter website. “No reported disorder between opposing groups at this stage.”

The screen shot at the top of this post was taken from the video that accompanied the Telegraph news article. If you watch the old fellow in the video being dragged off by the cops, you’ll notice that he seems to be virtually unconscious, and not at all well.

According to a BBC report, the arrests were made under a provision of the Terrorism Act. That is, laws that were designed to be used against people who intend to stage another 7/7 attack (or worse) are instead being used against indigenous English people who have done nothing wrong and are planning no kind of “terrorism” whatsoever.

That’s what happens whenever anti-terrorism laws are passed. Their provisions are so sweeping that invoking them for domestic political reasons becomes all but irresistible for the ruling class. The same is true of the Patriot Act here in the USA — all those rumblings about “right-wing extremists” began long before Obama, during the administration of a supposedly conservative president.

Finally, notice that the The Daily Mail makes sure to emphasize how dangerous those EDL guys are. After all, they “clashed” with violent Muslims (and police) in the past:

Trouble flared on Armistice Day last year when the far-right group clashed with Islamic protesters after members of Muslims Against Crusades burned poppies outside the Royal Albert Hall.

EDL founder Stephen Lennon was later charged with assaulting a police officer and five others associated with the group were arrested.

That’s their story, and they’re sticking to it.

It’s easy to understand why the authorities had to crack down on the EDL today. After breaking up MAC yesterday, if they didn’t come after the English patriots today, they would have been pilloried for “discrimination” against Muslims.

They would have been seen as displaying favoritism towards native Britons. And we can’t have that, now, can we?

…The Prince of Darkness to the Cenotaph
Bowed. As he walked away I heard him laugh.

6 thoughts on “The Prince of Darkness at the Cenotaph”