Ever since I can remember, the turtle has been my favorite animal.

In this case, however, the word “turtle” is inaccurate. All the species I have ever personally encountered — the Spotted Turtle, the Eastern Painted Turtle, the Cooter, the Red-Bellied Turtle, the Mud Turtle, the Diamondback Terrapin, the Snapping Turtle, and the ubiquitous Eastern Box Turtle — are classified as “terrapins” by herpetologists, even though only one bears that designation in its commonly-used name. A tortoise lives entirely on land; a turtle never leaves the water except to lay its eggs; but a terrapin can reside in both environments.

So why the terrapins for this fundraiser? Patience; all will become clear…

Dymphna mentioned in yesterday’s post that the theme of our autumn fundraiser is Community. As I’ve often pointed out, Gates of Vienna is a group effort, and has been for more that five years. It could not exist in its current form without the labor and cooperation of an extensive community.

This week’s fundraiser highlights that community by featuring the testimonials of some of our most active and prolific contributors. Today’s endorsement comes from Fjordman, who sends this message:

I have known the Baron and Dymphna for years now, and I can say with confidence that I have met very few people who work harder for less money.

As a European man, I almost find it a bit embarrassing that one of the best international blogs to cover European affairs and currents is actually based in North America, but it is a great compliment to the writing as well as observational skills of the two who run it.

If you value the best aspects of what once was Western civilization, and quietly hope for a rebirth or Renaissance of some kind, you should donate to this blog to make sure that its owners can keep on telling the truth in the future as well.

It is with Fjordman in mind that I chose turtles as a theme for this post.

Everyone who lives on the east coast of the United States has encountered a turtle crossing the road at one time or another. The box turtle is the species most frequently found in the middle of the road, but any terrapin is likely to cross a public thoroughfare as a part of his migrations.

Well-meaning people who rescue these lumbering creatures from the middle of the road — as I do — often make the mistake of moving the poor guy back to the ditch on the side of the road he came from. They don’t realize that the turtle will obstinately turn around and continue his journey on the same bearing he had been following before he was interrupted.

Turtles will always do this. Nothing short of death will divert them from the direction of their migration. The savvy turtle-rescuer moves the turtle to the side of the road at which his nose is pointed. There he can continue in the same direction until he reaches whatever destination his instinct and determination are driving him towards.

Doesn’t that remind you of Fjordman?

Last July he found himself in an alarming situation in the middle of the information highway. He did what a turtle always does: he pulled in his head and waited until the traffic thinned out before resuming his journey in the same direction.

Undeterred, undaunted, and still absolutely determined, he continues on the same bearing towards his destination.

A final note on box turtles: they’ll eat anything. When I was a kid, I fed my captive box turtles cantaloupe rinds, leftover stale pancakes (with syrup), gristly meat scraps, and potato peels — in addition to the more customary worms and bugs. They ate all of it indiscriminately.

Dymphna took this photo a few years ago under the wood pear tree along our driveway: 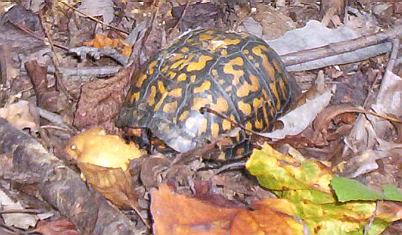 Yesterday’s donations came in from the following locales:

My heartfelt thanks to everyone who contributed. Your generosity, as always, is astonishing.

2 thoughts on “Determination and Endurance”