The following article appeared earlier under my byline at FrontPageMag in a slightly abbreviated form.

The Islamization of London: A Photo Tour

When I arrived in London in September it had been more than forty years since I had last spent any time in the city. If I hadn’t kept up with recent events through my British contacts, the changes would have been startling indeed.

The most popular tourist spots appear much the same, and the commercial areas are still thronged with shoppers. No matter where you go, however, the presence of Islam makes itself felt. With the rapid increase in the Muslim population over the past decade, the capital of Britain has moved that much closer to becoming an Islamic city.

The process of Islamization is not always as obvious as in this poster, which appeared one morning last July at a bus shelter on the corner of Mission Grove and Carisbrooke Road, in the Waltham Forest area of East London:

A straightened out close-up provides a clearer view of what the devout Muslims of Waltham Forest are demanding:

This is the new Islamic Britain as envisioned by the fire-breathing radical Anjem Choudary and Muslims Against Crusades. MAC’s latest initiative is called The Islamic Emirates Project, and its stated goal is “Breaking the Foundations of Western Civilisation”:

Muslims across the UK collectively declared their disgust of British values and their desire to live by the Shari’ah.

As Muslim enclaves across Britain rapidly edge closer to Islamic autonomy, Muslims Against Crusades in conjunction with several other leading Muslim organisations would like to declare the next chapter in the ongoing campaign to transform Britain into a thriving Islamic state.

Mr. Choudary lives in Ilford, but he and his supporters are also active in East London, Luton, and other parts of England where Islam is ascendant. He is the most forthright and plainspoken of Britain’s Islamic radicals. No taqiyyah or kitman (sacred lying) for him! He proudly proclaims the coming Caliphate in public, volubly and repeatedly, into the microphones and in front of the cameras.

Denial is rampant among the multicultural oligarchs of the political class. The British government prefers to believe that Anjem Choudary and other Islamic zealots are not serious in their avowed intentions. Their incendiary pronouncements are thought to be mere rhetoric — what they really want is more funding, more generous welfare benefits, new state-supported Koran schools, or more parking spaces around their mosques. Everything is business as usual to the politicos.

The leaders of the three major political parties find it impossible accept that these “extremists” mean exactly what they say. Acknowledging the problem would force the government to actually do something to save the country from destruction. In the second decade of the 21st century — with millions of Muslims already in Britain, and hundreds of thousands more arriving or being born every year — what could they do? How could Islamization ever be reversed without enormous expense or unimaginable violence?

No, it’s better to pretend that everything is harmonious and peaceful and normal in Modern Multicultural Britain.

From time to time the coming Emirate intrudes even into the tourist zones of London. On Saturday, September 24, under the sponsorship of Mayor Boris Johnson, a huge officially-sanctioned Eid Festival was held in Trafalgar Square. The domed building in the background is part of the National Portrait Gallery:

The cave-like structure below is a stage for performers. When I arrived, loud drumming was coming over the speakers. In the background you can see Nelson’s Column, which serves as a reminder of the greatness that once was, but is no longer:

The drumming was soon replaced over the PA by “Muslim rap”. A large display screen behind the fountain provides an incongruous contrast between the rapper and the nautical-themed statue in the foreground:

The Islamic presence is visible all over London. From Marble Arch to Docklands, from Piccadilly to King’s Cross: on virtually every street can be seen women in hijab, often pushing strollers, and men wearing skullcaps and Islamic robes.

One of my British contacts is a longtime observer of Muslims in the capital, and has analyzed the pattern of their street behaviors:

I regularly walk up and down Ladbroke Grove, Portobello Road and Harrow Road and have noted a process of coagulation or clumping of the sidewalks by Muslim women:

I think the term ‘coagulation’ is useful here as these people with their display of religiosity present a significant ‘thickening’ or hardening of the political and social sphere, whether in supermarkets, sidewalks, open-air markets, school entrances, etc.

Although at present these coagulations are relatively inert in this particular area of London, there will come a time when fiery imams during Friday prayers will manage to ignite this mass into the more volatile substance of an enraged mob.

Such Muslim inertness is the inner listening of those tuned to a different wavelength. It is misleading, however, as there is the constant increase in their numbers, and eventually their common grievances and irritations become standardized.

Their activation will be through mosques, which are their principal source of stimulation, and serve as a focus for the articulation of grievances and irritations requiring unified action.

Mosques are prominent in many different areas of the city. For example, this is the Regent’s Park Mosque, in a leafy middle-class neighborhood not far from Marylebone Road:

Certain areas of the city are more thoroughly Islamized, however. Tower Hamlets, which hosts the East London Mosque, has a majority-Islamic borough council and a Muslim mayor, Lutfur Rahman:

The Finsbury Park Mosque in North London was once the hangout of the notorious and picturesque Abu “Hooky” Hamza al-Masri, who is now in prison for terrorism offenses:

As Turkish prime minister Recep Tayyip Erdoğan once famously said, “The mosques are our barracks, the domes our helmets, the minarets our bayonets and the faithful our soldiers.” Allah’s faithful soldiers march up and down the streets of London every day. Their bayonets pierce the skyline, proclaiming to the city that Islam has come, Islam has seen, and Islam will conquer.

Yet the mosques are not the most striking evidence of the Islamization of London. Great Britain is metamorphosing into a formerly Christian nation. The grim truth really begins to sink in when contemplating, for example, what used to be St. Mary’s Priory on St Ann’s Road in Tottenham. At first glance the façade looks familiar enough — the cross on the gable, the Gothic Revival windows, the niche in the wall with a statue of the Virgin:

St. Mary’s Priory is now a madrassa. We love you ya Mohammed Rasulullah.

For the past two years, resistance to the Islamization of England has coalesced around a group known as the English Defence League, a grassroots working-class volunteer organization. On the tenth anniversary of 9-11, in response to a Muslims Against Crusades demonstration in front of the American Embassy in Grosvenor Square, the EDL mounted a counter-demonstration. Members of the EDL planned to show solidarity with the USA and respect for the victims of the terrorist attacks by laying wreaths in front of the embassy. When the day arrived, Anjem Choudary and his fellow radicals were allowed to declaim their invective against the United States and rant about the coming Caliphate through their bullhorns, while the peaceful demonstrators of the English Defence League were forcibly hauled away from the area by the police.

Such is the state of Modern Multicultural Britain.

Later that evening a large crowd of EDL people gathered in a pub on Edgware Road, not far from Grosvenor Square. A group of Muslims came into the place and attacked two men from the EDL with knives, sending them to the hospital with serious stab wounds.

When I visited the same pub two weeks later, there was no sign of any trouble. It was a peaceful, friendly place with ordinary English people sitting around talking, eating, and drinking beer. But a reminder of what had happened was posted on the window glass next to the main entrance: 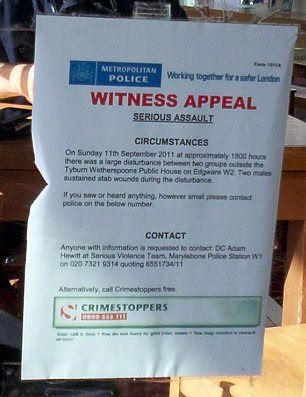 Any witness who chose to come forward might want to consider this poster, however:

The police officer who talked to the witness and took down the report could well be a member of the Association of Muslim Police, recruited for the force under one of the many diversity outreach initiatives. Police procedures mandate that Muslim officers be included on the scene in cases where Islamic “sensitivities” might be an issue. 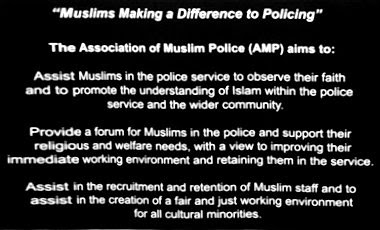 So a witness might have to talk to a Muslim cop under those circumstances. If you were an EDL supporter, would you step forward?

This is what London has come to. Halal food in all schools. No eating in front of your Muslim colleagues during Ramadan. Special accommodations for Muslims in public buildings. Officially sanctioned sharia courts.

And above all, no “racist” speech. Muslims may gather and scream “Death to those who insult Islam!” with impunity. But a non-Muslim who objects to the spread of sharia may be arrested, charged, convicted, fined, and slapped with an Anti-Social Behavior Order (ASBO) forbidding him from taking part in any activist events for several years.

This is the reality of 21st century Britain. This is not creeping sharia, it is galloping sharia.

I have seen the future, and it is Islamic.

Many thanks to Henrik Ræder Clausen of Europe News and Aeneas of the International Civil Liberties Alliance for allowing the use of their photographs in this article.

8 thoughts on “The Islamization of London: A Photo Tour”