For every OccupyWallStreet participant, there are 20,000 kids in India cramming for a calculus final. 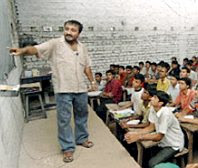 Investors’ Business Daily had an editorial on someone who is eminently qualified to dismiss the squatters and their grown-up, corrupt enablers: [my emphases -D]

As Democrats, corporations and billionaires fell all over themselves to cheer Wall Street mobs protesting capitalism and demanding free rides, the lone voice of Herman Cain challenging them spoke for the rest of us.

The unkempt protesters and their tent camps, garbage heaps and drum circles making Wall Street and other U.S. cities unbearable don’t have an articulate set of demands.

But their desire to end capitalism and still enjoy free-flowing government largesse is a constant, along with their nonstop claim to represent the “middle class.”

It’s as at odds with reality as the cast of characters jumping on their bandwagon of support: House Minority Leader Nancy Pelosi, responsible for $1 trillion in wasted government “stimulus” that went to cronies and destroyed millions of jobs, and President Obama, who publicly demonized business, despite taking in unprecedented Wall Street campaign cash.

Local politicians looked the other way on permits and handed out “free” tents, ponchos and porta-potties, in Los Angeles. Meanwhile, billionaire speculator and convicted inside trader George Soros threw support – and money – to these same protests against capitalism.

Now luxury ice-cream retailer Ben & Jerry’s, a unit of a multinational corporation as noted by BigGovernment.com, has joined the anti-business fun, tweeting: “To those who Occupy: We stand with you. We admire @OccupyWallSt & those around the country who have joined in solidarity.”

Amid this kultursmog of contradictions, a stark clarity from GOP presidential candidate Herman Cain stood out unlike that of any other national voice.

“Don’t blame Wall Street; don’t blame the big banks. If you don’t have a job and you’re not rich, blame yourself,” Cain told the protesters, who had lately been calling for debt amnesties and “free” education.

Cain’s stance was powerful, not just because it reflects the experience of millions of America’s “silent majority” – who’ve never asked for any special privileges as “their due” – but also because of who Cain is.

There couldn’t have been a single protester in any of those Wall Street protests who had to move the mountains Cain did through his life to rise to the top. He took on the disadvantages of race, poverty and lack of privilege without complaint, and emerged a winner.

The son of a chauffeur and domestic worker, Cain began his career first in the military, and then put his all into the study of math, science and economics. He rose to the top of the restaurant industry by pulling two major chains back from the brink of bankruptcy.

He then scaled even higher heights, serving as chairman of the Federal Reserve Board of Kansas City.

Is there a single, whining protester in the Occupy Wall Street mob who has such a capacity for hard work, humility and leadership? We rather doubt it.

They may be middle-class as they claim to be, but only in the sense that 1960s Weather Underground terrorist and Obama mentor Bill Ayers was also middle-class – a spoiled, self-absorbed radical who has posed most of his life as a “revolutionary,” while working from a privileged perch within the far-left reaches of academia.

It’s the very opposite of Cain’s sterling character and life experiences. And he isn’t letting up.

“I happen to believe that these demonstrations are planned and orchestrated to distract from the failed policies of the Obama administration,” Cain told the Wall Street Journal. [Me, too – D]

For ordinary Americans who must make their way in the world with some of the same disadvantages as Cain, his words ring true.

Yet, curiously, he was almost alone in speaking out – only GOP Rep. Paul Ryan of Wisconsin made comparable acerbic observations. Where are the other presidential candidates with Cain’s boldness? [Hiding in the bathroom, maybe? – D]

Cain’s willingness to confront an irrational and self-absorbed mob – which, as it grows, will be capable of acting out in far worse ways than it already has – is a sign of Reagan-like leadership.

As the moral void in today’s political leadership continues to widen, Cain’s courageous stance may turn out to be even more important than it looks.

It already is looking very important. He’ll have the courage to address the black robmobs, too. In comparison to Cain, Obama looks more and more like the “protestor-president” he’s always been. His clue bag is every bit as empty as the lawless children he openly and stupidly admires.