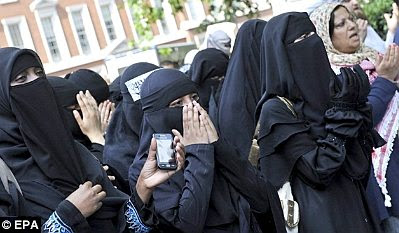 This email just came in from one of my contacts in England:

I saw a large group of Muslim women yesterday while I was travelling down a main thoroughfare in West London — a head-turning moment as roughly fifteen black-clad (head to toe, a couple of niqabs) women spilled out of an Arabic restaurant about midday.

What made the event chilling was its martial aspect — the paired formation — I imagine similar events might have occurred in Victorian Britain when the Temperance League or similar went out to preach.

This bunch looked like the women who accompany Muslims Against Crusades demos. They appeared confident, etc., and most definitely ‘owned’ the pavement.

2 thoughts on “Brides of Satan”