Below is the third article in a four-part series on history, human development, and Islam by our English correspondent Seneca III. A slightly different version of this essay was previously published at Crusader Rabbit. 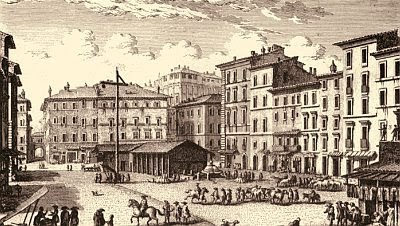 A Long Day’s Journey Out of Night
Part III: Belief

On a chill Thursday morning, February 17th in the year 1600, just sixteen years before Galileo Galilei barely escaped the same fate, the fifty-one-year-old Benedictine friar Giordano Bruno was led naked and with an iron spike through his tongue into the Campo de’Fiori in Rome, burned at the stake for committing “heresy in matters of dogmatic theology”, and his ashes dumped in the Tiber. His crime had been to comment on the work of Nicolaus Copernicus and suggest that there were infinite worlds in the universe with intelligent life, some perhaps with beings superior to humans.

This was an extremely brave thing to do. Within the Roman Catholic Ecumene of the 16th and 17th Centuries — just as it is today within the Islamic Umma — it was invariably fatal to challenge the Church’s doctrinal power base, a fate Copernicus, a curate and Renaissance polymath, had managed to avoid by publishing his seminal work ‘On the Revolutions of Celestial Spheres’ in 1543, only shortly before his death by natural causes at the age of seventy.

Whether the timing of its publication and his passing were planned or simply fortuitous is a moot point, although circumstances do point to the latter. But being the essential pragmatist that he was Copernicus may well have understood that the failure of the human mind to come to terms with the fundamental difference between faith and doctrine, between apostasy and heresy, has been a prime cause of conflict and atrocity throughout our history.

Bruno was also a cosmologist and polymath of high standing — his qualitative approach to mathematics and his application of spatial paradigms of geometry to language are considered a classic of their time — but in other respects he was a very different kettle of fish to Copernicus. Recent examination of the background to the case indicates that another dynamic had just entered stage left, Renaissance Hermeticism. Bruno subscribed to the mysticism verging on magic that lay at the core of Hermeticism, esoteric beliefs originating in the ancient Greek writings attributed to Hermes Trismegistus and which to some extent still exist today within Rosicrucianisn, Freemasonry and Coptic scripture.

In this context it is worth noting the seventh of the eight charges that Bruno faced:

Faith, belief in superior beings, gods if you will, is a metaphysic probably as old as our species, and a very slippery one it is; in its purest form it is spiritual and personal but its fellow traveller, theology, or dogma, is temporal, a human attempt to explain the unexplainable and invariably it does so in what are the perceived best interests of a particular power elite, the priesthood or clerics.

Bruno’s statement about the nature of the Universe was clearly a challenge to the elite of his day. It undermined their theological position, their ‘raison d’etre’, it condemned him to a dreadful fate and caused his works to be placed in the Index Librorum Prohibitorum (along with those of Copernicus) for fear they would infect others. Yet today these statements do not even raise an eyebrow, they might even be considered passé in some quarters, and this must therefore beg the question “How was the ruthless power of the Christian clergy and the theological dogmatism that sustained it shattered, and hence why are Inquisitions and burning stakes no more?”

Broadly speaking, the short answer can be found among the headstones of those men and women who each walked their own small stretch of the long trail that began with the Renaissance in the 14th century, struggled through the devastation of the Thirty Years War — which ended in the predominantly secular settlements of the Peace of Westphalia — and culminated in the Enlightenment, an era of Western philosophy, intellectual, scientific and cultural life centred upon the 18th century in which reason was advocated as a primary source for legitimacy and authority.

However, that said, another question raises its ugly head “Why did the need arise in the first place and why, after all those centuries of blood and pain do we now face the prospect of having to do it all over again to an atavistic Imamate?”

One answer may lie in a subtle difference between the three major Religions that arose in the area of the fertile crescent — Judaism, Christianity and Islam — and those of the East such as Hinduism, Confucianism, Shintoism and that most humanitarian of them all, Buddhism.

These Eastern religions share several characteristics that are in essence quite different from those of the Western Triumvirate:

They are not, of course, immune from sectarianism or internecine strife but, with the exception of certain caste systems, this sectarianism is overall more benign than malignant. Indeed, Shintoism wholeheartedly embraces Buddhism and many of its practises, and both systems ease along together in complete harmony.

On the other hand Judaism, Christianity and Islam are ‘revealed’ belief systems burdened with revelations, instructions cast in stone in the wording and in the light of the limited understanding of their time, the word of God delivered through the inadequate mouth of man out of the traditions of Hellenistic and Roman metaphysics, belief systems that were riddled with oracles, seers and prophets.

And, when it comes to prophets, predestination and reason meet at a Philippi both far more ancient and modern than the Roman one, one where, in an era of WMD, we should all be thinking pretty damn hard about what the future holds and what we are going to have to do if we want to hold onto it.

Offhand I can only think of two recent publications that have elicited a similar medieval response as did the works of Copernicus, Bruno and Galileo: The Bell Curve (1994, Hernstein & Murray**) and The Satanic Verses (1988, Rushdie). Both challenged established ‘dogmatic theology’, the former in the field of cognition, particularly its application within the politically correct constraints of ethno-social doctrine, and the latter in the swamp of Islamic revelation. Their authors also faced trial before a court of vested interests.

Although Rushdie has managed to survive the wrath of the demented ‘Slaves of Allah’, others have not been so fortunate. Hitoshi Igarashi, the Japanese translator, was stabbed to death in 1991, and a few days later Ettore Capriolo, the Italian translator, was stabbed and seriously injured. William Nygaard, the Norwegian publisher, just managed to survive an assassination attempt in Oslo in 1993.

Conversely the The Bell Curve did not generate any physically lethal fatawa, but as Professor Richard Hernstein died before the book was released, he was unable to defend his thesis during the coruscating ideological storm that followed. His co-author, Charles Murray, lived on through a long period of media and academic debate and comment, both pro and con, including some sustained attacks on the personal integrity and academic standing of the authors. This proved again that one diddles with dogma at one’s peril, and therefore one should not be that surprised that recently there has been a demand from the ‘Intelligent Design’ tendency for the teaching of this devious repackaging of Creationism as equal to and alongside that of Evolution.

If nothing else this illustrates that priesthoods continue to cling tenaciously to those simplistic, doctrinal explanations that have for so long sustained their sinecures. And, having only these to offer in support of their postulates, such clergy are by necessity reduced to negative campaigning where the rationale behind their premise pushes credulity to its limit by proposing that the Universe is far too complex to have happened by chance and, a priori, must have been ‘designed’.

Consequently, and irrespective of whatever my own metaphysic is or is not, I suggest that if the universe is too complex to have just happened and therefore must have been designed, then it is axiomatic that the Designer must be infinitely more complex than the design. Hence, compelled by the imperative illogic of the original premise, I must ask, “What, then, designed the Designer?”

There is, of course, no answer to be found in such an infinity of mirrors, and those who need to embrace their existence within the constraints of revealed belief systems could ease their pain by simply recognising evolution as the Designer’s chosen methodology. After all, who are they, mere mortals, to deny the gods — whom, one presumes, have all of time and unlimited options on their side — this particular tool of their choice?

Or, to put it another way, from what moral position can we set out to deal with the pre-medieval, unenlightened dogmatism of Islam whilst still burdened with the detritus of our own?

That said, let the floodgates open, but before they do I would dare to suggest that Intelligent Designers and the non-inquiring minds of the Islamic Umma might care to note Bruno’s reply to the Inquisition: “Perhaps you, my judges, pronounce this sentence against me with greater fear than I receive it” Wherewith he demonstrated that a human mind under the lonely lens of a rational microscope is a prime example of evolution in action.

18 thoughts on “A Long Day’s Journey Out of Night, Part III”