Kirsten Heisig was a German juvenile court judge who believed in decisive action and significant sentences for youthful offenders (including “youths”), in order to interrupt their criminal careers at an early age. She disappeared a year ago, and when her body was eventually found, her death was ruled a “suicide”.

Not long after that, Thilo Sarrazin caused controversy by criticizing immigration, especially Muslim immigration, in his best-selling book Germany Abolishes Itself.

Many thanks to JLH for translating this book review by Udo Ulfkotte from Kopp Online:

Judges Without Law: Too True to Be Beautiful 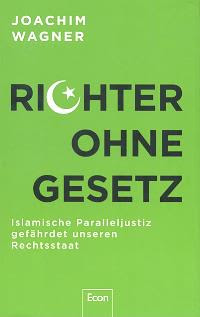 Steady drips wear the stone away. Perhaps there is more than a glimmer of truth in this proverb. Almost exactly a year ago the book by Judge Kirsten Heisig appeared: The End of Patience. It was about youth criminality and immigration. Then came Thilo Sarrazin. And now the renowned ARD journalist, Joachim Wagner.

Many people will remember Joachim Wagner from the NDR TV magazine Panorama or from the program Report from Berlin. Born in 1943, the fully qualified lawyer always appeared politically correct and never caused any scandal. Now he is retired and he can speak freely and openly, without risking his job. Joachim Wagner is now one more drop from a barrel concerning the dark side of immigration. As a lawyer, Wagner points out many alarming examples of the fact that there is already an parallel Islamic justice system in Germany that is canceling out our constitutional republic.

The book, Judges Without Law, is worth reading. With a great deal of expert knowledge, it meticulously shows even the legally uneducated where our state is heading because of immigration from Islamic countries — to ungovernability. Wagner’s contribution is to have rigorously analyzed the dry facts of crimes and vividly shown their relationship with the illusory multi-culti ideal. What reader is aware that there is a space in every mosque for “settlement of disputes”? In every town with a mosque, there is such a room for “settlement of disputes” — which is nothing more or less than a challenge to our legal system, because the legal monopoly of the German state is being systematically undermined by Islamic “peace judges” or “dispute judges.” The victim and witnesses testify here, when they should come before judges in a German criminal court. And every mosque will deny that there is such an area, And if it is impossible to avoid speaking of this space, then it is only for “counseling in family disputes.”

The book Judges without Law is worth reading because a recognized and previously politically correct journalist describes facts which are anything but politically correct. According to these facts, imams are by no means merely benevolent and integration-friendly fellow citizens. There is a wholly different perspective here. Wagner does not shrink from reporting on the high crime rate among Muslim citizens. Anyone who has read Wagner’s book and has until now rejected or criticized Kirsten Heisig or Thilo Sarrazin is presented with a multitude of facts which could just derail a Do-gooder. It is not about “isolated incidents” — it is about the systematic destruction of our democratic state. We may wonder, then, whether the no longer politically correct Joachim Wagner will now be allowed to tell the truth in legal and public broadcasts.

4 thoughts on “The Systematic Destruction of Our Democratic State”