Below is an article published last Sunday by a former Danish leftist, who writes about sharia-controlled zones in his old neighborhood in Århus.

Many thanks to Steen for the tip, and to Nemo for the translation. 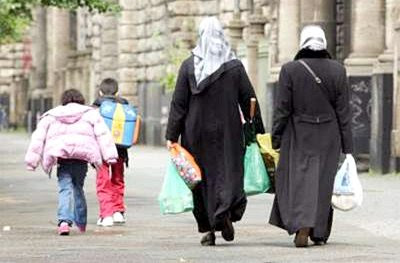 My Experiences with a Danish Sharia-Zone
by Dan Ritto

On the front page of today’s edition of [Danish newspaper] Ekstra-Bladet you can see the headline ‘Here, sharia law applies’, and a map of the areas of the country where the imams and so-called cultural societies have established an alternative judicial system based on sharia law.

One of these areas is Gellerupparken, where I used to live and participate in what I thought was an effort to integrate immigrants into society. A feature article in the newspaper says that according to experts, these areas will, in the course of 10-15 years, be anti-democratic. I’ll stipulate that depending on what you mean by “democratic”, Gellerup has already turned that corner.

Unfortunately, the criticisms coming from Islam-sceptics like myself are almost always swept off the table with the remark that we are stupid and ignorant. Therefore in the following I will present my credentials and background for talking about conditions in Gellerup, so that the readers themselves can judge whether I am ignorant or not.

When I returned home from seminary in London in 2004, I had no possessions except for some boxes with my books in them — and the clothes on my back. I had no money and no place to live. A couple of months later I got my apartment — in Gellerupparken, because back then as now it was very quick and easy to get an apartment there. On top of that the apartments were actually surprisingly lovely, in spite of the reputation the area had.

After some time I became an active member of the society called ‘Multikulturel Forening’ [Multicultural Society]. I even became its vice-president. But before then, very soon after moving in, actually, I had new neighbours. It was a very nice guy who moved in along with his family — among them a son in a wheelchair. No one in the family spoke any language other that Arabic, so I never got to talk to any of them. But they always greeted me with big smiles and a lot of warmth, and they as well as the master of the house made a fantastic impression. His name was Shaykh Raed Hlayhel. Shaykh Hlayhel was imam in the mosque on Grimshøjvej, but that interested me little back then. Later, when the whole cartoon crisis erupted, I learned with amazement that my good neighbour was one of the imams who travelled and spread lies about Denmark throughout the Middle East.

One day, Hlayhel disappeared from the country. Literally in the dark of night. One day he was there — the next, he was gone. It said in the newspaper that it was because of dissatisfaction with the cartoonists not being punished by the Danish courts. Based on what I saw and experienced leading up to his disappearance, I am pretty sure it happened because he was put under pressure. My guess is that PET [Police Intelligence Service] was involved, but that is pure guesswork on my part.

Shaykh Hlayhel was a good and respected neighbor, but at the same time he was an enemy of my country. That was the first time I experienced the double nature of Islam!

But as I said — at one point I became an active vice-president of the Multicultural Society. And because at that time I was also an active member of Det Radikale Venstre [a very centrist and immigration-friendly party], some of the locals had confidence in me. Ironically, that included some of the hard-core criminals who often sat down to chat when I sat and ate in Bazar Vest [a shopping mall in the area]. Over the next couple of years I learned an awful lot!

Of course I wanted to know about Islam, so I posed a lot of questions. I was told by everybody — the young as well as the old, convicts as well as pensioners — and those active in associations as well as businesses that the Muslims had come to create a new society in this country. They were absolutely candid about that, even proud. Because it will be better than the old ways, they said. And as I am not opposed to improvements, a lot of them told me more about the many blessings of the sharia law. The punishments most of them skipped lightly over, but a concept like ‘dhimmi’ (the rights of non-Muslims under sharia law!), I learned about for the first time up in the Bazar — and what they told me was later confirmed both by the Quran and other sources.

I also learned what they meant when they said ‘multiculture’. Namely that Muslims should live and be judged in accordance with the sharia law and the rest of us by our laws. However — our laws were never to contradict the sharia. This, by the way, was the reason I ran screaming from that Society, because that I would not be party to!

At one point during this period I got the suspicion that there was a direct connection between the imams (or some of them at least) and the groups of young men the media and the police called gangs. Neither then nor now could I prove this, but I notice that Ekstra-Bladet in its feature draws a connection between the upholding of the sharia court system and the youth groups belonging to the culture societies and the mosques. The intelligent reader is encouraged to draw his own conclusions!

Very often have I been told that ‘We have our own rules out here’ and that problems are solved without involving the police. Back then I couldn’t imagine sharia courts in the middle of Århus, but today I understand that was what they meant.

At the same time I know that during the ghetto-riots in the winter of 2008 (when the Muhammad-cartoons were reprinted!), the disturbances in Gellerup were directed from within the residents’ communal house, Yggdrasil, where the parents of most of the rioters sat together with a couple of imams. All while cars and dumpsters were set on fire and the ‘youths’ were fighting with the police.

During the 3½ years I lived in the area, I saw AK 47-rifles out in public three times. They were not fired, just taken out. On top of that, a couple of pistols and from time to time knives. My conclusion is that there are enough weapons in circulation out there.

I could go on for a long time describing my experiences in Gellerup, but that shouldn’t be necessary. The point of this whole tale has been to establish by credentials when I talk about Islam, integration and Gellerup, and should be in order now!

Also among the politicians here in Århus the real conditions in Gellerup/Toveshoej are very well known. Two examples: When the local city authorities in Århus some time ago wanted to draw up a plan to beautify the area, a lot of care was taken to obtain the support of the council of imams. During these negotiations the imams (who call themselves ‘The Islamic Societies’— which is exactly the same!) made a few changes. That, along with an ‘understanding’ on the part of the Social Democrats about the building of a mosque in the middle of the area, was what it took to reach an agreement. Only then did the politicians dare propose the plan in the City Council. The imams had to agree to it beforehand!

The other example is the mayor we had until a few weeks ago, Nicolaj Wammen (a Social Democrat). He has been elected mayor here in Århus twice, and both times he had long conversations way in advance of the elections with the previously mentioned ‘Islamic Societies’ — that is, the imams. Wammen got their support, and thus the votes of a majority of Muslims in Århus.

Today, the conditions in the social system in this city are such that women from immigrant families are hugely over-represented among those given an early retirement pension, both compared to all new ‘early pensioners’ and to immigrant women in the rest of the country. Young men from ‘the area’ are very seldom or never given menial jobs when they are on social welfare, as is supposed to happen. I would be breaking the libel laws if I were to claim that this is somehow connected to the talks Wammen held with the imams, so I won’t say that. I’ll just stick to wondering about it!

It must be added that the city council is just now working on a budget that has to cover a 300 million dkr. (about $55 million) deficit — most of which is caused by budget transgressions in the social departments. Now Wammen seeks election to the Danish parliament, and is predicted to become either a top minister in a new government or Helle Thorning Schmidt’s replacement as chairman of the Social Democratic Party should she lose the election. The thought alone is nightmarish!

The power the imams hold in Gellerup is such that the area is already anti-democratic. Contrary to what Ekstra-Bladet seems to think, you don’t have to wait another 10-15 years!

Conditions in the other ghettos mentioned by the newspaper I know nothing about. Yet, like anyone else, I could see that when a certain shop called NETTO on Nørrebro was the target of some aggression, it was a Danish-born imam who ordered the largest criminal gang in the area to discontinue the harassment, after which he himself held talks with Netto. While the gang leader of course sat next to him and looked threatening! In light of the information in Ekstra-Bladet about the implementation of the decisions made by the alternative court system and my own experiences and suspicions from Gellerup, this is very interesting. Again: The libel laws preclude my drawing any conclusions or claiming anything — I just have to wonder about the connection and the obvious authority this imam has in relation to the largest gang on Nørrebro! I am sometimes asked about my change of mind. How I came to change from being a relatively high profile vice-president of Multikulturel Forening to becoming a strong and uncompromising critic of Islam. Now you know. I am critical of Islam because I know both the Muslims and Islam. Given the choice, I have chosen freedom. Because freedom is better than slavery, because light is better than dark — because civilization is better than Islamic barbarity!

In a couple of days we will elect new members of Parliament. The choice is very simply between [the current government] and a government dependent on Det Radikale Venstre, Socialistisk Folkeparti and Enhedslisten, three parties with the common trait that they either do not understand the danger that creeping sharia poses or — as is the case with Enhedslisten — even support it. Not to mention characters such as Nicolaj Wammen!

To me it is a very easy choice to make.

15 thoughts on “My Experiences with a Danish Sharia-Zone”