A reader from New York State sends this account about an Eid festival that was held yesterday in surprising (and, for us “Islamophobes”, disturbing) proximity to a new 9-11 memorial next to a firehouse in the community of Wappingers Falls.

Her first set of observations was written yesterday, and she includes a brief follow-up from this morning.

As I was out assisting my son’s move to his own new home today, I drove past a fire house which is putting the finishing touches on a brand new 9/11 memorial using one of the I-Beams from the Twin Towers. 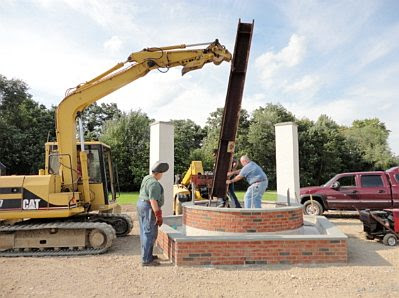 Paused at a traffic light, I took notice of the feverish efforts of several locals raking the ground to a smooth finish in preparation for tomorrow’s dedication marking the tenth anniversary of 9/11. 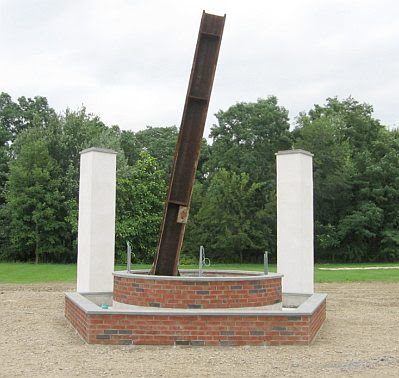 Distracted by noise coming from my far left, I turned to witness the utter gall of the local mosque’s Eid carnival taking place directly across from this memorial. To the best of my knowledge, this mosque has never used that parcel of land for amusements in the past. I have never seen anyone use that parcel of land at all. 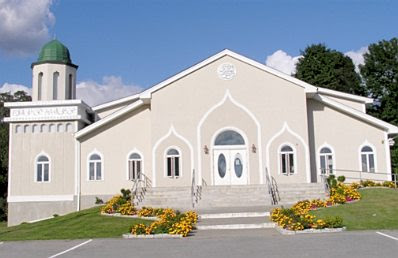 Recently, I did take notice of a WWII memorial statue depicting a soldier crouching to honor the war dead, and is located across the road from this mosque, appears to face this mosque. I took satisfaction in that image, imagining our soldiers keeping a watchful eye on it. 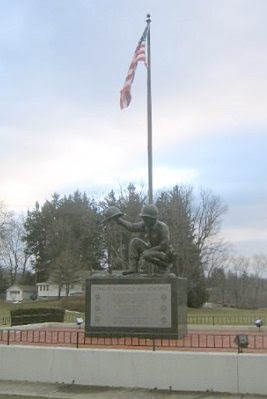 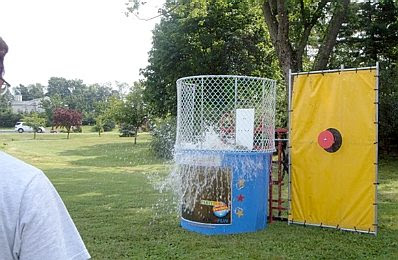 The mosque is visible in the distance of the above photo as well. 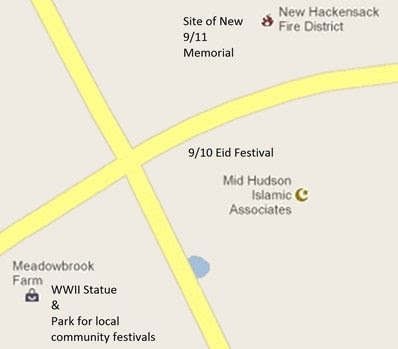 However, unlike all previous summer fun festivities, this Eid festival is timed to coincide with 9/11 and at a location directly facing the new 9/11 memorial. I’ve not been aware of any previous Eid festivals at this mosque or near it. If they held similar activities in the past, it wasn’t as visible or at this location.

At the break of dawn this morning I drove past the site again and to my satisfaction noticed the entire lot across from the new 9/11 memorial is clear of any Eid festivities prior to the dedication ceremonies.

True to the mosque website’s claim, the Eid carnival was only taking place yesterday.

Where a commercial-sized, inflatable dual slide with walking balls existed yesterday, only a stubborn puddle from the deluge of rain earlier this week remained. A white tent remains up the hill, back on the mosque property, and does not impose upon the 9/11 memorial.

Perhaps I’m over-sensitive, and overreacted to yesterday’s event. The timing and placement of this carnival could have been planned better to avoid the juxtaposition of such an inappropriate festival directly facing preparations for the ten-year memorial for 9/11.