Live-blogging for the EDL demo in Tower Hamlets has concluded. Follow-up photos, videos, and articles will appear as separate posts.

The EDL at Kings Cross: 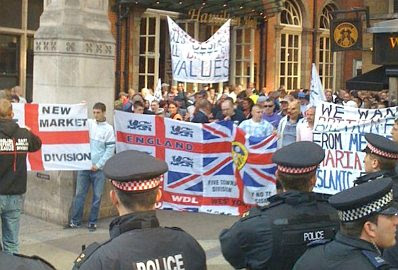 As a matter of interest, an EDL member on the scene put the crowd at around 3,000.

The community stoppped EDL and defied the police ban with a victory march. A victory for multiculturalism Theresa May #fail #uafeastend

In what way did “the community stop the EDL”? The EDL still turned up en masse, and then the UAF went against the police ban. Not good PR.

Another one of our peaceful lefty friends from a few hours back:

Violent clashes between police and EDL on corner of minories street. EDL trying to break through to aldgate. Horses gearing up.

There is a group of women on bikes going after EDL, literally riding their bikes into them and screaming in their face. Bloody heroes!!

@policemonitor The Network for PM

Tommy Robinson, dressed as a rabbi, climbs on stage at the demo:

Update from an EDL source: “Tommy Robinson was NOT arrested. The EDL got him away before the police could reach him.” 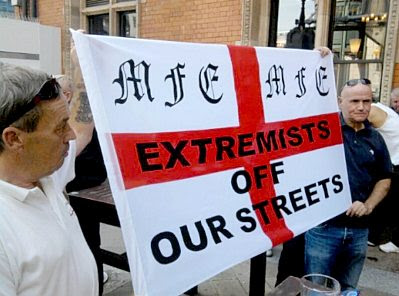 It seems that Yaxley-Lennon might have evaded police arrest. Four police officers went to arrest him but he escaped. Either that or he broke free of the police. Will try to find out more.

Getting reports of 500 police heading down Minories, towards Tower Hill.

And what’s it all about? Why, the Oslo massacre, of course!

Tensions have been heightened by the actions of the anti-Muslim extremist Anders Behring Breivik, who admitted killing 77 people in July when he detonated a bomb in the Norwegian capital, Oslo before embarking on a shooting spree at a youth camp on the nearby Utøya island.

The EDL demonstration is its first since the killings by Breivik, who had praised the organisation in the past and claimed to have 600 EDL supporters as friends on Facebook.

Nothing about why the EDL is demonstrating. Nothing about the Islamization of England. Just a reiteration of “Anders Breivik, EDL — same thing!”

“Kevin Carroll is currently speaking about the ineffectual politicians who have sold out to the Islamists. He’s calling them Judas to their people. Tower Hamlets is England. If the government can’t police the Islamists and ensure freedom of speech, they should use the army.

“He asks for the government to make military covenant law and pays tribute to our troops, and also emphasises peaceful protest.

“He also pays tribute to Israel. He asks for people to go home peacefully from demo.”

Tommy Robinson has been arrested. Nick Lowles at Hope Not Hate:

15.18 Stephen Yaxley-Lennon has been arrested

He was goading the police that he was breaking his bail conditions and invited them to arrest him. It seems they did just that.

From a lefty on twitter, SofiaEfree aka So Fiyah:

Pol conf to me that #edl being taken to Whitechapel Rd cordon, but w’re being pushed down Mansell St. Inkling they’ll be taken behind RBS.

Report from the scene:

The crowd is loud, but it certainlydoesn’t sound threatening. There are plenty of police around and that’s about it. It’s a bit too noisy to talk, though.

@anne_schulthess i went fascist hunting. The #uaf rally is miles from the edl! Edl is police escorted and protected. Shame! Are you staying?

Police coming in hard to break the two sides off. #EDL

RT @hackneyhaz Overheard in Brick Lane, copper: “The #EDL have done what they were told, it’s you lot that haven… bit.ly/nB7fbI

According to the Socialist Worker, UAF are ignoring the Home Office ban on marches:

2.45pm. Several hundred anti-racist protesters have marched from their rally to Osborn St, at the bottom of Brick Lane—in defiance of Tory home secretary Theresa May’s ban on marches.

They have stopped close to where the EDL are hoping to rally. Demonstrators are chanting, “Whose streets? Our streets!” and “Black and white, unite and fight”.

A speaker from the Islamic Forum of Europe said, “This time last year we stopped the EDL from coming here. This time we are going to do it again because I see Muslims, Christians, Jews, gays and lesbians all here today.”

Loads of police vans going into the direction of cable street. Got the feeling #edl is going there. Or just Precaution

The police can’t control this. Too many EDL arriving from all directions

Update from Tower Hamlets: It seems that Kings Cross station is now open and a group of 500+ EDL are coming on the tube. We’ve heard that they will come into Liverpool Street, where they will link up with 3-400 already there.

So Kings Cross is open again.

Update from Tower Hamlets: Just got news from the site of the EDL protest that they are being given the whole of Aldgate. Huge police activity.

Update from Tower Hamlets:The EDL are moving off from Liverpool Street in groups of ten. It’s going to take quite some time to get them all to Aldgate.

a snippet of video of the EDL at Kings Cross

From HOPE not hate:

Update from Tower Hamlets: The police began escorting the EDL towards Kings Cross station only to find the RMT (transport workers’ union have closed the tube station. There’s 300+ EDL outside the station and no-one has a clue what is happening.

The demo is beginning about now (14:00 London, 9am EDT). Reports indicate that the demonstrators have been denied access to Tower Hamlets proper, and that the demo is being staged just outside.

4 thoughts on “Live-Blogging the EDL in Tower Hamlets”