The convergence of two significant events prompts this celebration of 9/12.

Today Lars Vilks and the Modoggies were back in the news with the latest reports about the terror arrests in Gothenburg. It is thought that Mr. Vilks may have been the intended target for this new Mohammed-intensive conspiracy in Sweden. Culture-enrichers from all over the world have been looking to harm Mr. Vilks for more than four years, and these “militants” from al-Shabaab had hoped to at last exact revenge for the infamous Roundabout Dogs.

Yesterday, as part of our 9-11 commemoration, we reminded our readers that September 11th was also the 328th anniversary of the arrival of King Jan III Sobieski on the Kahlenberg overlooking Vienna.

In contrast to yesterday’s solemn tributes, today we celebrate the victory of the Poles, the Germans, and the Austrians at the Gates of Vienna. On September 12th, 1683, Jan III Sobieski and his troops routed the Turks in the nick of time, lifted the siege of Vienna, and put the Islamic horde to flight back into the Balkans.

In honor of the occasion, Lars Vilks created the following special watercolor, depicting the King of Poland in a guest appearance with the dreaded Roundabout Dog:

“Jan III Sobieski Confronts a Rondellhund at the Gates of Vienna” 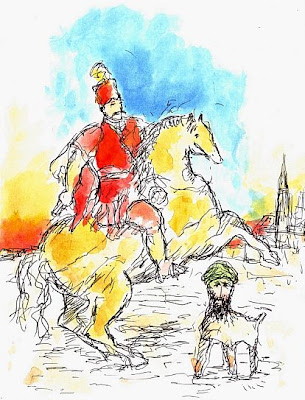 3 thoughts on “Celebrating 9/12 with a Roundabout Dog”