For the last ten days commentators all over the world have been preoccupied with Anders Behring Breivik. The psychology of the killer, his “Christian” beliefs, his “right-wing extremist” political opinions, and the resulting necessity for a crackdown on “Islamophobia” throughout Europe — these have been the major topics of discussion.

Shortly after the atrocity occurred, it became clear that the EU and European national governments were not about to let the crisis go to waste. Less than twenty-four hours after the shootings, Europol was ready to go with its blueprint for a task force for Norway. Its plans to deal with “homegrown, non-Islamic terror threats” had obviously been in place for a while, ready to be pulled off the shelf and utilized at the first opportune moment.

Immediately after that the EU declared itself ready to fight “right-wing extremism”, saying that “this atmosphere of intolerance had abetted the attacks in Oslo and on the island of Utøya.” Needless to say, those who created the “atmosphere of intolerance” were people like you and me, people who have chosen to speak out against the Islamization of Europe.

The British press began to connect the murderer with the EDL. German Muslims called on their government to take legal action against websites that “provoke Islamophobia”, especially Politically Incorrect. The push was on.

Commentators focused on the ideology being promoted by “populists” — the lowest of the low in politics, those populists, people whose opinions actually appeal to ordinary citizens. The bien-pensants found it “worth wondering to what extent the proponents of the new right — an ideology that clearly influenced Breivik — have been implicated by his actions?” In this case the commentator was Dutch, and the “populist” in the crosshairs was Geert Wilders.

So the responsibility for Anders Breivik is being clearly laid out: “populists” created an “atmosphere of intolerance” which “implicates” them in the psychopath’s crime.

That is, we are in the process of being set up.

The machinery for all this has been in place for a long time. It just took a little bit of Breivik-gasoline in the tank to start it rumbling along. It doesn’t really matter whether this was a “false flag” operation or not . The killer could have been exactly what he seemed to be, and the state apparatus just decided to seize a golden opportunity the moment it presented itself. The end result is the same.

There’s more going on here than just the ramping-up of oppression in Europe.

Let’s pull back a bit from the situation, rising through the troposphere to gaze down on the larger map, where Europe is just a small red-highlighted patch on the globe. There are several bright green nodes to look at: Saudi Arabia, Al-Azhar University in Cairo, and Istanbul, the European outpost of Turkey. These are, respectively, the petrodollars, the theological powerhouse, and the political muscle behind Sunni Islam and the Organization of Islamic Cooperation (OIC). 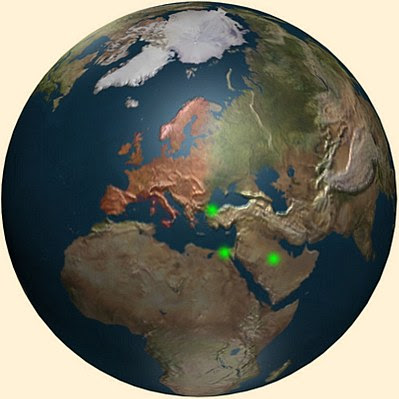 There’s another crucial green Islamo-node, but it’s over the horizon in Washington D.C., hovering over the State Department building in Foggy Bottom. Over the past few months, while American political junkies have been busy freaking out about the debt limit or obsessing over potential Republican candidates for president, Secretary of State Hillary Clinton has been quietly building a cordial relationship with the OIC. She wants the Muslim world’s cooperation during the next few years, as the United States copes with chaos in Iraq, Afghanistan, and Pakistan, while Iran builds a working nuclear bomb. In return, she’s willing to abolish the constitutional rights of Americans.

The plan is to find a way to implement UN Human Rights Council Resolution 16/18, which would require member states “to take concrete steps to combat intolerance, negative stereotyping and discrimination, incitement to violence, and violence against persons based on religion or belief”. Or, to put it in more straightforward language, they would have to outlaw the criticism of Islam.

There’s only impediment to Mrs. Clinton’s ambitious plans: a pesky little scrap of paper known as the First Amendment to the United States Constitution.

However, now that Anders Breivik has demonstrated the full consequences of allowing “Islamophobia” to run unchecked, what right-minded person could ever object to a few restrictions on freedom of speech to make sure that nothing like the Oslo massacre ever happens again?

That’s the general set-up. The next stages of the operation, as outlined by co-chairmen OIC Secretary-General Ekmeleddin Ihsanoglu and Secretary of State Hillary Clinton, are explained in this article from Arab News. I’ve highlighted some of the more notable portions:

ISTANBUL: In what can rightly be described as a seminal step in relations between the Muslim world and the Western world, the Organization of Islamic Cooperation and the leading nations of the Western world led by the United States and the European Union agreed Saturday to take concrete steps to combat intolerance, negative stereotyping and discrimination, incitement to violence, and violence against persons based on religion or belief.

Ever since he took office, the OIC secretary-general has been working on formulating ways and means to stop acts of religious intolerance.

“It was during my address to the 15th session of the Human Rights Council in Geneva that I outlined a new approach toward evolving a consensus against incitement to violence and intolerance on religious grounds that could endanger peaceful coexistence and must be viewed as a direct contrast to the very notion of a globalized world,” said Ihsanoglu. “I am glad that the eight points in the proposed approach found resonance with all the negotiating partners. They formed the basis of the consensus reflected in Human Rights Council Resolution 16/18. The importance of the consensual adoption of this resolution should be duly recognized.”

“However, the test would lie in the implementation. Having been successful at consensus building, we must now act in concert to build on the consensus. The adoption of the resolution does not mark the end of the road. It rather signifies a beginning based on a new approach to deal with the whole set of interrelated issues,” said Ihsanoglu. “Resolution 16/18 provides a good basis for concerted action by states, at both national and international levels and must be utilized accordingly. Otherwise, we would be faced with the unaffordable risk of the agenda being hijacked and set by radicals and non-state actors.”

Ihsanoglu said there was a delicate balance between freedom of expression and incendiary speech.

“We continue to be particularly disturbed by attitudes of certain individuals or groups exploiting the freedom of expression to incite hatred by demonizing purposefully the religions and their followers. Though we respect their freedom of opinion and expression, we find these attitudes politically and ethically incorrect and insensitive.”

At the meeting, Clinton discussed how to build on a UN Human Rights Council resolution passed on March 24 that calls for promoting tolerance and respect for diversity of beliefs, without restricting legitimate free speech.

Clinton agreed to pursue a new religious tolerance agreement, which respects free expression of religious beliefs in order to resolve debates over religion between the West and the Islamic world.

“Together we have begun to overcome the false divide that pits religious sensitivities against freedom of religion,” Clinton said. “We are pursuing a new approach based on concrete steps to fight intolerance wherever it occurs.“

Speaking of the United States, Clinton said: “We have seen in the United States how the incendiary actions of just a very few people can create wide ripples of intolerance, so we are focused on promoting interfaith education and collaboration, enforcing anti-discrimination laws, protecting the rights of all people to worship as they choose, and to use some old-fashioned techniques of peer pressure and shaming so that people don’t feel that they have the support to do what we abhor.”

She commended the Organization of Islamic Cooperation for its work securing the passage of Resolution 16/18 at the Human Rights Council.

“Resolution 16/18 calls upon states to protect freedom of religion, to counter offensive expression through education, interfaith dialogue, and public debate, and to prohibit discrimination, profiling, and hate crimes, but not to criminalize speech unless there is an incitement to imminent violence. We will be looking to all countries to hold themselves accountable and to join us in reporting to the UN’s Office of the High Commissioner of Human Rights on their progress in taking these steps.”

The chain of causation has thus been fully established: when a blond blue-eyed psychopath kills scores of people, the websites he likes to read are partially responsible for his acts. By OIC standards and Resolution 16/18, these sites engage in “intolerance, negative stereotyping and… incitement to violence”.

By the way — it’s interesting to note that the same is not true of incendiary Islamic preachers — not even the ones who cry “Death to those who insult the prophet!”

No, this is a one-way street: only non-Muslims can be guilty of incitement to religious hatred. Even totally non-violent sentiments qualify as incitement, as long as they express a negative opinion about Islam. Them’s the rules.

And now Mrs. Clinton has identified a necessary intermediate step, which involves “peer pressure and shaming”. In other words, things that people like me think and say will be judged doubleplus ungood. Our sentiments will become so far beyond the pale that outlawing them will scarcely be necessary, a mere legislative afterthought.

Imagine a compliant Congress, mesmerized by our success in killing Osama bin Laden and ready to help our “democratic allies” in Iraq, Afghanistan, Egypt, etc.

Imagine when President Obama appoints a replacement for a retiring conservative justice on the Supreme Court.

Imagine just one more incident involving a blond blue-eyed mass murderer whose ideology can at least nominally be identified as “conservative” or “anti-immigration”.

Where do you think we’ll be after that?

Do you really think it can’t happen here?

I’m telling you, the OIC is running the show.