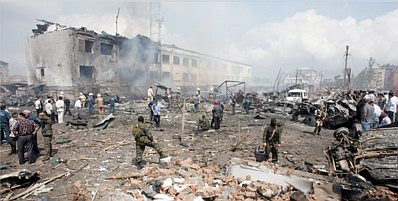 As I mentioned in my first post in this series, Anders Behring Breivik reportedly received training at secret a paramilitary camp in Belarus:

Earlier this month “Niccolo Machiavelli” dug into Mr. Breivik’s Belarus activities in greater detail for a post at Big Peace. The killer’s eastern activities reveal cloak-and-dagger underworld connections that lead through Belarus into Russia, Chechnya, and beyond.

A Polish site reports that the paramilitary camp — which Mr. Breivik may have visited three times — was organized by a retired KGB colonel named Valery Lunev. The Real Russia Blog has more:

While U.S. news feature information that Breivik purchased ammo from a U.S. supplier, Eastern European feeds are full of details of Breivik’s multiple trips to Belarus, changes in his behavior and wealth, and the training he underwent in Belarusian militant camps. In fact, Belarus’ tight government regime and active intelligence have served a great purpose this time around. Even though Breivik didn’t do anything suspicious at the time, Belarusian KGB kept precise records on Breivik, who was called “Viking” in the intelligence reports.

First time, Anders Breivik visited Minsk on March 4, 2005. He flew Vienna-Minsk-Vienna roundtrip, departing from Belarus on March 11, 2005. At the border, Breivik told customs officials that he came to visit the Vikings’ graves. Centuries ago, Vikings went through the region multiple times, and there are indeed multiple ancient graves visited by the Vikings’ ancestors. Thus, the first visit didn’t trigger any suspicion. It is still unknown whether Breivik visited the graves, but he did investigate Belarus’ governance, political structure, and the results of the Chernobyl nuclear disaster. The tour guides, who chaperoned Breivik in 2005, remember that he was afraid of poisoning with radioactive food products – a normal, they say, tourist behavior for a Western tourist. Now, that the stuff hit the fan, Belarusian KGB looked closer into what Breivik was really doing in their country.

It appears that the Norwegian terrorist underwent the militant-terrorist training under the guidance of 51-year-old Valery Lunev, a former colonel of Belarusian special forces, who now lives in Netherlands but regularly visits Belarus. According to Mikhail Reshetnikov, the Head of the Party of Belarus Patriots who is familiar with the intelligence records, “Breivik visited Belarus three times. Last Spring, while actively preparing for the terrorist attacks, he entered Poland with his own passport, and then travelled to Minsk under a passport of another European country. He recently got a Belarusian girlfriend and obtained access to significant amounts of money.”…

The fact that Mr. Breivik was monitored by Belarusian intelligence and associated with a retired KGB colonel means that he was well-known to the shadowy international spy networks long before the events of July 22, 2011. If the Belarusian security services are even minimally competent — which, since they inherited the KGB apparatus, seems likely — then we may assume that Mr. Breivik’s Belarusian “girlfriend” was in fact an agent of the state, tasked with monitoring his movements and activities when he was east of Talinn. Such would have been the practice of the KGB, which supplied “girlfriends” for as many Western businessmen and diplomats as possible.

But Anders Breivik’s connections in the former Soviet Union extended much farther afield than Minsk. Big Peace tracks the links between Mr. Breivik and an organization called the “Slavic Union”, as briefly mentioned by a Chechen website:

Russian authorities in Oslo… previously warned the Norwegian state security police PST that Vyacheslav Datsik and his followers from the Slavic Union were preparing a terrorist attack (it now seems that the Russians did it on purpose to divert police attention from Breivik — KC).

So who is Vyacheslav Datsik? The Chechen propaganda mill is not the only source of information about him. According to Norway’s TV2, as translated by a Norwegian English-language news service:

Broadcaster TV2 has reported that it has emerged that Breivik had met Russian neo-Nazi Vjatjeslav Datsik in Oslo, who was previously rejected when he attempted to apply for asylum in Norway after running away from a Russian psychiatric institute. Datsik was jailed in Norway and eventually deported for various offences. Breivik has reportedly had close links with Datsik’s organization, Slavic Union, who were found to possess knives, guns and firebombs when police raided an Oslo tattoo enterprise operated by the group. Breivik is believed to have bought much of his equipment from Russia.

The story becomes even more peculiar as we dig into a report from last year that Datsik claimed to have been sent to Norway by the Russian secret service to kill a Chechen separatist leader:

Vjateslav Datsik, a Russian neo-Nazi arrested in Oslo after fleeing a psychiatric ward in St Petersburg, was sentenced to eight months in prison on Thursday for violating weapons laws. He was heavily armed when he tried to seek asylum in Norway earlier this year.

Datsik, age 29, had declared himself guilty on all counts. He has earlier claimed that he wants to stay in Norway as long as possible, and equated the prison where he’s being held to “a luxury hotel.”

Also known as “Red Tarzan,” Datsik has said he rowed over the Baltic Sea after running away from a Russian psychiatric hospital where he claimed to have been tortured. He also has told reporters and the court that he had been sent to Norway by federal agents in Russia who wanted him to kill Chechyan separatist leader Akhmed Zakajev. [emphasis added]

“Wait a minute, Baron!” you say. “This Datsik fellow sounds like a common or garden lunatic. Maybe the Russians had him in the nuthouse for a good reason.”

And maybe they did. But the Russian and Chechen connections don’t end there, and all the threads seem to intertwine with Islamic radicals and terrorists. Once again, a report from a Chechen source:

Akhmed Zakayev [the target of the alleged assassination attempt], right after the World Chechen Congress in Warsaw 2010, had to visit Norway. Since then, Russian agent was aiming on Akhmed Zakayev. According to ChechenCenter’s received sources, Russian agent named Viacheslav Valerievich Datsik, was sent to Norway to assassinate Mr. Zakayev three months ago.

Datsik received a gun from Russian FSB and was told to eliminate Chechen leader, the most diplomatic politician in Europe. With such information Datsik informed the Highest Court of Norway and also added that his friends forced him to give up to the local police and explain the situation.

As it is known for some authorities, Viacheslav Datsik is under arrest now and going through variety of court processes. The Highest Court of Norway is planning to jail Datsik for eight months. Datsik seems to be satisfied to spend eight months in prison and wants to get rid of Russian KGB. Datsik says that KGB (FSB) anonymously urged him of something bad.

So, if we believe these stories, Mr. Datsik was sent to Norway by the FSB to kill a Chechen separatist. But he then changed his mind and turned himself in to the Norwegian authorities.

If this were where the trail ended, then we could wrap things up, and readers would depart disappointed. But there’s more.

Let’s take a closer look at the reported associations of Valery Lunev, the former KGB colonel under whose guidance Anders Breivik is said to have received paramilitary training in Belarus. Among other things, we read that Col. Lunev converted to Islam when he married a relative of the late Dzhokhar Dudayev, a former general in the Soviet Air Force and the first President of the Chechen Republic of Ichkeria.

He also has connections with the Gulf Emirates. He is an officer in a private intelligence company, Far West LLC, which is based in Dubai, according to a translated Russian report. The brother of one of his colleagues in Russian intelligence was reportedly assassinated in Dubai.

The intrigue gets even thicker. The largest shareholder in Far West is Prince Turki al-Faisal, the former head of Saudi Military intelligence, and a former ambassador to both Great Britain and the United States. Other prominent shareholders include a general from Ukrainian military intelligence and a former subsidiary of the U.S. company Halliburton. Ruslan Saidov, a retired major on the Soviet General staff and a Muslim Chechen, holds a 25% share.

According to the Russian report, Both Saidov and Lunev are associated with the Grey Wolves, the underground Turkish radical nationalist group which has connections with Chechen separatists.

The same report lists what it says are some of Far West’s customers:

All of this is a murky stew, as intelligence matters usually are, especially where Russia is involved. It’s hard to see the underlying patterns.

But let’s recap a bit of what we’ve learned (assuming, of course, that any of this material is true, which we don’t really know):

No coherent overall plan can be discerned from such a mishmash.

Pro-Chechen or anti-Chechen? Is there an Islamic connection? Who knows?

But one thing is for certain: given the cast of characters and the organizations involved, it strains credulity to think that Western intelligence services had never heard of Anders Behring Breivik before July 22, 2011.

To put it more strongly: It is inconceivable that the PST and the CIA had never run across the Oslo murderer’s name before he committed his crimes.

Given that American, British, and Norwegian intelligence services were active during the period when Mr. Breivik was hanging out with all those spooks and assassins, one of the agencies is certain to have run across him. If none of them did, they must be very incompetent indeed.

Investigators are also looking to Breivik’s finances (over $700,000 earned through his investments), possibly in Bermuda or other Caribbean tax havens, but those investigations seem to be in early stages.

With a Russian assassin (with whom Breivik reportedly met) allegedly in Oslo to kill a Chechen leader, and a large CIA presence also in Oslo attending demonstrations, photographing potential terrorists and cooperating with at least some branches of Norwegian law enforcement, surely it is worth investigating whether some hint of Breivik’s planning for the attack hadn’t been detected by one or the other of these intelligence services.

No matter what the intelligence services might have known back then, they are busily denying any such knowledge now.

For those whose credulity has been sufficiently strained by all this, the main remaining question is: Why?

Previously in the Breivik Portfolio:

18 thoughts on “The Breivik Portfolio, Part Two: The Chechen Connection”