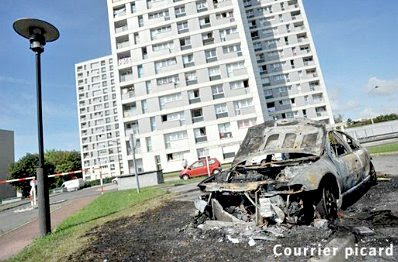 Below is a press release that was posted last Thursday at the official website of the National Front in France. Many thanks to AG for translating it:

The distress of the citizens of Amiens

The “northern neighborhoods” of Amiens are unfortunately becoming famous for their grave disorders, these arising almost daily. In August 2011, the police have been injured by (thrown) rocks, cars have been burned, (and) surveillance cameras destroyed. Police reinforcements have had to come in from (the Region of) the Pas-de-Calais or from (the Region of) Seine-Maritime. The local newspaper notes that “this new flare-up of violence comes right in the middle of Ramadan at a time when many families are gathering to break the fast.”

The federation of the National Front (in the Region) of the Somme, in possession of complaints from numerous citizens of Amiens (many of whom, on top of everything else, have been unable to leave on their vacations…), assaulted in their daily lives, urgently requests that the Prefect re-establish order, put a stop to the extortion, and haul the delinquents before the magistrates.

One thought on “Grave Disorders in Amiens”