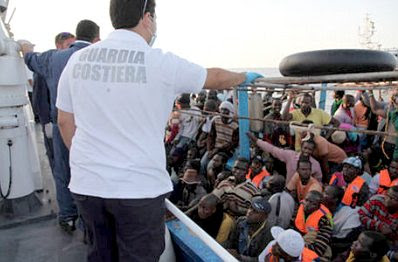 Now that the Qadaffi regime in Libya has collapsed, Italian leaders are openly discussing the fact that Col. Gheddafi deliberately engineered this year’s flood of immigrants into Italy, as punishment for Italian participation in the NATO air war against Libya. The issue is being talked up in anticipation of a future war crimes trial of the former dictator when he is finally captured and brought to justice.

I’ll have more details on the Gadafi question later in this post, but first let’s look at the new arrivals in Italy. Since my last report, an additional 257 culture-enrichers have landed on the island of Lampedusa. This brings the year-to-date total of illegal Mediterranean immigrants into Italy to just under 54,000, which is not enough of an uptick to warrant a revision of the Cultural Enrichment Thermometer.

A group of 155 migrants arrived last Wednesday from Tunisia:

Another 155 Tunisian Migrants Arrive on Lampedusa

(AGI) Palermo — Migrants continue to arrive on Lampedusa as the immigration influx from Tunisia heightened in the past few days while it slackened from Libya. Other 155 Tunisians arrived on the island last night on three boats with 9,57 and 89 persons on board, sighted by the Coast Guard and the Financial Police.

102 more landed on Friday, apparently a mixture from both Libya and Tunisia:

(AGI) Rome — A total of 102 migrants landed on the island of Lampedusa yesterday evening (Aug 26), the Italian Coast Guard reports.

Earlier in the week a group of culture-enrichers in a camp in southern Sicily staged yet another ruction in an attempt to escape. Some of the rioters were successful, and are still at large:

(AGI) Ragusa — There was an uprising at the first aid post in Pozzallo last night as hundreds of migrants tried to escape.

Fifteen or so officers attempted to quell the rioting refugees.

Sixteen escapees were tracked down, but another fifty or so are still missing and a police search is ongoing. Thirteen migrants have been arrested and charged with causing damage and obstruction. Five police officers have been hurt.

Now for a closer look at the war crimes case against Col. Moammar Qheddafi, the Man of Many Spellings. First, this brief note from ANSAmed, which reports the acknowledgement by the Libyan ambassador to Italy of something that everyone already knew:

(ANSAmed) — Rome, August 26 — Gaddafi himself was responsible for the flow of illegal migrants from Libya to Lampedusa, as punishment for Italy’s participation in the UN-decided intervention. So said Libyan ambassador to Italy Abdulhafed Gaddur in a radio interview.

Gaddur confirmed in programme ‘Radio anch’io’ on Radio Uno what was earlier said by Italian Foreign Minister Franco Frattini regarding Gaddafi’s use of immigrants from sub-Saharan Africa as “human bombs” against Italy.

“He was in charge” of immigration from Libya, said Gaddur.

“He led the flow of illegal immigration. He said he wanted to colour Lampedusa ‘black’, sending many Africans ‘so that the Italians would understand what it means to participate in the enforcement of the no-fly zone’. I confirm that Gaddafi himself organised this flow of illegal migration…. He was the one who gave the orders.” Gaddur added that he believes at least a thousand migrants have drowned in the Mediterranean in an attempt to reach Italy from Libya.

The Daily Telegraph has a more detailed account, basing its report on statements made by officials of the Italian government:

Col Gaddafi directed tens of thousands of refugees towards Italy as “human bombs” with the intention of turning the tiny island of Lampedusa into a “migrant hell”, the Italian government has said.

Col Gaddafi directed tens of thousands of refugees towards Italy as “human bombs” with the intention of turning the tiny island of Lampedusa into a “migrant hell”, the Italian government said yesterday.

The Libyan leader deliberately unleashed the floodgates of African immigrants desperate to reach Europe, as punishment for what he saw as Italy’s betrayal and its participation in the Nato-led air campaign.

He largely succeeded in his objective — nearly 50,000 migrants have arrived on Lampedusa since the beginning of the year, putting a huge strain on the tiny island’s resources.

They came from Libya but also Tunisia, after that country’s regime was toppled in a popular revolt which marked the start of the Arab Spring.

Hundreds were forced to live in a makeshift shanty camp, sleeping in the scrub under sheets of plastic stretched over driftwood, on what islanders dubbed “the hill of shame”.

“Italy has proof of orders given by Col Gaddafi to turn Lampedusa into hell,” said Franco Frattini, the foreign minister.

“There is proof Gaddafi gave the order to send thousands of desperate people on boats, in order to throw the island into chaos,” he said.

“We have terrible messages (in our possession) and they will be made public soon,” Mr Frattini said in an interview with Avvenire, a Catholic newspaper.

Hafez Gaddour, Libya’s ambassador in Italy, who defected from the regime in February, told Rai radio that Gaddafi controlled illegal immigration “in person, saying that he wanted to turn Lampedusa black with Africans,” to punish Italy for its role in the Nato campaign. The migrants would act as “human bombs”, he said.

The “weaponization” of sub-Saharan refugees by Col. Qaddafi was public knowledge long before the Arab Spring began. As reported in this space on several occasions, the Colonel extorted more money from the EU by threatening to open the immigration floodgates.

The Telegraph touches briefly on this history of Libyan extortion:

African refugees and economic migrants have for years tried to reach Lampedusa by sea in search of a new life in Europe.

The flow was blocked after Italy signed an accord with Libya providing for joint patrols in the Mediterranean.

That agreement collapsed when the Libyan revolt broke out earlier this year and relations soured between Col Gaddafi and Silvio Berlusconi, the prime minister, who had previously had a close rapport.

There had long been suspicions — reported by The Daily Telegraph in April — that the Gaddafi regime was encouraging refugees to flee to Lampedusa as revenge for Italy’s support for military action.

The following day the Italian government upped the ante by proposing to charge Col. Gadafi with crimes against humanity for his use of illegal immigrants as weapons:

Frattini: Use of Migrants a Crime Against Humanity

(ANSAmed) — Rome, August 26 — The despatching of immigrants, headed for the coasts of Lampedusa, many of whom died in the Sicily Channel, could be held against Colonel Gaddafi as “an accusation he has to face. In my opinion, we are close to a new crime against humanity”. Italy’s Foreign Minister, Franco Frattini, has been speaking in Bertinoro (Forli’-Cesena) today.

Gaddafi’s idea of transforming Lampedusa into a kind of ‘hell’, Mr Frattini noted, “there is proof of this, there is evidence gathered by the TNC, which I have spoken to Prime Minister Jibril about. He will make them public”.

According to Mr Frattini, “it was Gaddafi himself who repeatedly threatened to send an invasion of refugees as a weapon of vengeance against Europe and not just against Italy.

Unfortunately he did it, unfortunately thousands of refugees died at sea” Mr Frattini argued.

For her part, Italy will assist Libya and the countries of sub-Saharan Africa to tackle the migrant emergency in North African countries where, as some estimates have it, one and a half million people are attempting to reach Europe, Mr Frattini said in a radio interview.

“The recipe is to aid immigrants of sub-Saharan Africa in their areas of origin, to bring development to their countries of origin and to help a country like Libya, which is not a country of origin for immigration, but is a country of transit, to tackle this phenomenon”.

“We have already done this with Tunisia, when in February an enormous flux of people were escaping the Tunisian revolution, and Italy quickly sent its intervention to the temporary camp, even evacuating hundreds of people to their countries of origin to help them in the places they were born. The recipe is not to create great encampments here in Italy, where there are not enough jobs to go round, there is not possibility of welcoming them”.

Note: Mr Frattini is now using the revised, higher figure for the total number of immigrants, as recommended by this blog a couple of weeks ago:

“Up to now we have managed the 50,000 people who have arrived since January. We have done this with humanity, distinguishing between those who had a right to refugee status, who will remain, and those who were illegal economic migrants, who we accompanied to Tunisia, helping Tunisia to find a job for them.

But the management of migration is a European issue, not a matter for Lampedusa, for Sicily or for Italy”. [emphasis added]

“I confirm that Gaddafi himself organized this flow of illegal migration,” said Abdulhafed Gaddur on Italian radio. “He was the one who gave the orders”.

Since the start of the year, some 50,000 migrants and refugees from North Africa, first from Tunisia and then from Libya, have arrived on the tiny Italian island of Lampedusa, which quickly overburdened local facilities.

A deal with Gaddafi to turn migrants back before they neared Italian waters had limited the flow of migrants until the Libyan uprising earlier this year brought down strict border controls, and Italy’s involvement in a NATO intervention soured a once friendly relationship between Italian Premier Silvio Berlusconi and Gaddafi.

“[Gaddafi] said he wanted to turn Lampedusa black,” said Gaddur, referring to the fact that many of the exiles were migrants to Libya from Sub-Saharan Africa. Gaddafi said he wanted to use them as “human bombs,” Gaddur added.

Gaddur said he suspected that one thousand people died in their attempts to reach Italian shores.

As the Gaddafi regime nears its end, Frattini responded to suspicions that Italy and France were more interested in Libya’s resources than the best interests of the country itself, which is a former Italian colony.

“There’s no race to see who gets there first,” said Frattini on Italian radio.

“We’re doing what we’ve always done: confirming the friendship between the Italian people and the Libyan people,” he added.

The foreign minister also said that Italy’s military role in Libya will continue even after Gaddafi is found, “as long as the circumstances require,” highlighting that the transitional government will have the final say.

He also underlined Italy’s “decades-long” ties with Libya, including mutual political and economic interests, which he said will continue now that the transitional council has promised to honor trade agreements with Italy.

Once Gaddafi’s closest European ally, Italy has investments in Libya stretching from multibillion-euro defense and construction contracts to oilfields that supply the Italian oil giant Eni, representatives of which have been working with Libyan insurgents in Benghazi to reactivate oil installations shut down by the military conflict.

When NATO began its air war against Libya a few months ago, Col. Ghaddafi was offered safe passage out of Libya to the retirement home of his choice, in one of the usual places exiled dictators go, such as Uganda. But the Colonel remained defiant. He refused to go, and said he would fight to the bitter end.

Well, the bitter end is here. Now he’s being set up as the fall guy, and it looks like his only remaining choice is between a war crimes tribunal in the Hague and a JDAM.

3 thoughts on “Camp of the Saints: The Fall Guy”