Update: Ethan, one of the co-authors, has written us with a text correction (The event was held on the 6th of June in 2010, not this year). Also, the translation from Arabic was made by Translating Jihad, here and here.

The report below was written for Vlad Tepes and Gates of Vienna by writers associated with the magnificent Dutch website Het Vrije Volk . The article concerns a public event held last month in Den Bosch which was organized by a Salafist cleric who unabashedly promotes violent jihad and the enslavement of infidels:

On Sunday the 6th of June 2010 a Salafist congress took place in the Brabanthallen in Den Bosch. The main guest at this happening was “the noble great scholar Sheikh Abu Ishaq al-Hoeweyni”. 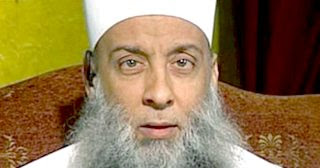 This sheikh is a prominent member of Jama’a al-Islamiya, one of al Qaeda’s affiliated organizations.

Three weeks ago (June 11th), there was an item in the news (and video) about an Egyptian Sheikh Hoeweyni, who made de following statements:

We are in the era of jihad. The era of Jihad has come to us and jihad in the path of Allah is a pleasure. It’s a real pleasure. The companions (of the Prophet) used to compete to (perform jihad).

That we are in poverty — is it not due to our abandonment or jihad? But if we could conduct one, two, or three jihadist operations every year, many people would become Muslims Throughout the earth. And whoever rejected this da’wa, or stood in our way, we would fight against him and take him prisoner, and confiscate his wealth, his children, and his women — all of this means money. Every mujahid who returned from jihad, his pockets would be full. He would return with three or four slaves, three or four women, and three or four children. Each head, multiply by 300 dirhams, or 300 dinars, and you have a good amount of profit. If he were to go to the West and work on a commercial deal, he would not make that much money.

Whenever things became difficult (financially), he could take the head (i.e. the prisoner) and sell it, and ease his (financial) crisis.

Huwaini actually made these scandalous assertions some eighteen years ago. But because they were only recently exposed, and he was invited to “clarify” his position on Hikma TV last week. Amazingly, though he began by saying his words were “taken out of context”, he nonetheless reasserted, in even more blunt language, that Islam justifies plundering, enslaving, and raping the infidel. (Al Youm 7 has the entire interview, excerpts of which I translate below.)

According to Huwaini, after Muslims invade and conquer a non-Muslim nation — in the course of waging an offensive jihad — the properties and persons of those infidels who refuse to convert or pay jizya and live as subjugated dhimmis are to be seized as ghanima or “spoils of war.”

Huwaini cited the Koran as his authority — boasting that it has an entire chapter named “spoils” — and the sunna of Muhammad, specifically as recorded in the famous Sahih Muslim hadith wherein the prophet ordered the Muslim armies to offer non-Muslims three choices: conversion, subjugation, or death/enslavement.

Huwaini said that infidel captives, the “spoils of war,” are to be distributed among the Muslim combatants (i.e., jihadists) and taken to “the slave market, where slave-girls and concubines are sold.” He referred to these latter by their dehumanizing name in the Koran, ma malakat aymanukum — “what your right hands possess” — in this context, sex-slaves:

You go to the market and buy her, and she becomes like your legal mate — though without a contract, a guardian, or any of that stuff — and this is agreed upon by the ulema.

“In other words,” Huwaini concluded, “when I want a sex-slave, I go to the market and pick whichever female I desire and buy her.”

Those are pretty strong statements for an organization which claimed in 2003 to have renounced violence (although in 2006 it announced a new alliance with Al-Qaeda). But on the other hand, not surprising from a group that is accused of being behind the increasing violence against Christians in Egypt. Also, the increasing number of reports in newspapers recently about Coptic girls being kidnapped by the Salafists. It is remarkable that this group is openly going into politics in Egypt after the collapse of the Mubarak regime.

Back to the Brabanthallen: it is easy to find out who is behind this event, because during this meeting a joint urgent appeal was made to the Ummah to vote against the party of Geert Wilders and for a party that serves the interests of Islam. Which is odd, because Salafists usually don’t vote, because they don’t accept democracy.

Here is the statement.

A quick search on Google shows that these sheikhs are very popular in the Netherlands, particularly among Dutch adolescents. On many Dutch Islamic sites (sometimes even state-funded), these sheikhs are extensively and reverently praised.

Salafism is a fundamentalist /extremist movement within Islam, which organizes political, social and personal life only according to the principles of the Quran and the so-called representations of the early Islamic period.

The Salafist movement, which is steadily expanding in the Netherlands, is engaged in extremely fanatical da’wa (zeal), especially among young people in unstable community centers (youth centers) and prisons. Almost without exception these radicals support the jihad. Not infrequently they are supported by and receive funding from the useful idiots on the left of the political spectrum.

Besides The Netherlands, the noble great scholar Sheikh Abu Ishaq al-Hoeweyni also visited Belgium (Brussels*) and Germany (Dortmund* and Berlin*). During his visit to Germany he didn’t have any problem with using the system of medical care provided by the Western community, because of his health problems.

10 thoughts on “The Spoils of War”