We all know that the mainstream media have a double standard when it comes to political ideology. If you are a conservative — or even worse, a nationalist — you are held to a different standard than that applied to progressives and socialists. Those are just the rules of the game, and it’s been that way for a long time.

The double standard was glaringly revealed when the reading preferences of the man who confessed to committing last week’s atrocities in Norway were revealed. Anyone holding the wrong political opinions — especially “Islamophobic” ones — was held indirectly responsible for the murder of all those innocent people. None of those so implicated had ever supported or advocated violence, yet their writings were deemed to be an “inspiration” for the killer.

Many thanks to our Washington correspondent Frontinus for discovering an example of the other side of this double standard: a television program which the Oslo murderer loved, and which glorified a depraved serial killer. The same program has already inspired other successful murderers — so where is the liberal outrage?

The silence is deafening.

The appalling killing in Norway, and its purported justification via a 1500 page “compendium” by the mass murderer Anders Behring Breivik under the pseudonym “Andrew Berwick,” has let loose a remarkably well-coordinated campaign against any intellectuals who have opposed Islamisation or jihadists in Europe, a campaign pursued with meticulous precision by the New York Times, the leftwing blogs and the European press, executed against political leaders (Wilders, Merkel, Cameron, Sarkozy et al), against authors of books and opeds and essays, against human rights activists, anyone who has written or acted against violent jihad or the imposition of the violent doctrines of Shariah in western nations.

But no one is talking about the Dexter Factor, which is this: “Andrew Berwick” liked the Dexter cable series about a ruthless and completely deceptive serial killer.

A ruthless and completely deceptive killer, a narrator detailing his murderous plans, proud of his clever ability to escape detection. 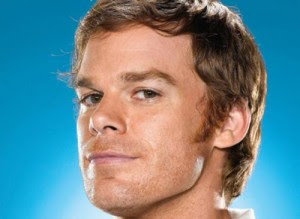 “Andrew Berwick” didn’t just watch Dexter, he found it “hilarious.” He wrote: “I am currently watching Dexter, the series about that forensic mass murderer. Quite hilarious. I’m also looking forward to watch the new movie-series about Carlos the Jackal (the Marxist-Islamist and Che wannabe scumbag).” He mentioned Dexter a second time in a list of other television programs he likes, a fanboy mixing explosives chatting about his viewing habits.

The Dexter series is about a forensic analyst for the Miami Police Department, on the surface a mild-mannered and psychopathically deceptive lab technician, secretly a serial killer. A brutal, methodical, self-justifying serial killer. The Dexter series is dedicated to glamorizing serial killing, with a focus on the mechanics of execution. A show explicitly and unashamedly glamorizing evil, justifying evil, and training in the specific operations of evil. With, of course, the occasional post-modern ironic, self-referential moment of doubt, to make it all a bit more socially acceptable.

Without shame. Without abhorrence.

No shaming for Dexter’s author, directors, actors, producers, advertisers. No shaming for them for being cited in “Berwick’s” compendium, no stern demands for censorship from the New York Times or the always trendy European media.

There are several glaring discrepancies in media coverage of the heartbreaking and enraging attack in Norway, but this one is obvious: this mass murderer “Andrew Berwick,” aka “Anders Behring Breivik” was a fan of a show about a serial killer that is widely reported to have been watched by, and said to have inspired, other murderers.

Of course, why would the media ever report on that? It is, to use that always useful phrase, “an inconvenient truth.”

Some background: Dexter is based on a series of novels by Jeff Lindsay with titles like “Dexter is Delicious” and “Dearly Devoted Dexter.” It airs on the cable network Showtime and in 2008, edited reruns began running on CBS. The actor Michael C. Hall plays the main character. Producers over the years have included Daniel Cerone, Clyde Phillips, Melissa Rosenberg, Clyde Phillips and Chip Johannessen. It’s received a lot of awards and presumably earned many people lots and lots of money. Nihilistic brutality and a “how-to” on escaping detection turns out to be a winning and lucrative programming formula.

But there have been costs to all that success — borne tragically and criminally by others. Dexter had been associated with at least three other murders before it was cited by fan and mass murderer “Andrew Berwick.”

Dexter Factor Murder #1: In 2008, Johnny Brian Altinger, 38, was reported missing October 10th. On October 31st Mark Andrew Twitchell, 29, was charged with first-degree murder. You can read the details of the crime here, where CBC News reported that:

Anstey said they were led to the garage because Altinger had e-mailed a friend the directions where he was told to go, and the friend kept that e-mail.

On his Facebook page, Twitchell is revealed to be a huge fan of the Showtime program Dexter, which follows the exploits of Dexter Morgan, a blood-spatter expert for the Miami police who also leads a secret life as a serial killer.

“We have a lot of information to suggest he definitely idolizes Dexter,” Anstey said.

Anstey also alleged the police have evidence that Twitchell tried to emulate the character.

Prosecutors said Conley admitted to police that he’d fantasized about killing someone since he was in eighth grade, and compared himself to a fictional serial killer on a cable television series.

“Andrew stated that he watches a show called ‘Dexter’ on Showtime, about a serial killer,” prosecutors said in an affidavit. “He stated, ‘I feel just like him.’“

You can read the affidavit here [pdf].

Dexter Factor Murder #3: In April, 2011, Maartens van der Merwe, 24, and Chané van Heerden, 20, were arrested in Welkom, South Africa, in connection with the death of 24-year-old Michael van Eck. You can read the details of the crime here as reported in the local Afrikaans paper Nuus 24, in google translation:

Several people close to the couple has any connection to organized Satanism denies and instead focused on a history of psychological problems and a fantasy world where the two lived.

The couple loved the bloodthirsty TV series Dexter and the Van Zyl family says the couple’s relationship was a mirror image of a deadly, deadly partnership in the latest season of the TV series. …

In their world was the character Dexter Morgan and Pierce Lumen of the TV series Dexter.

Maartens van der Merwe and van Heerden Chané loved the series about a forensic bloeddeskundige which is actually a serial killer and include opkap corpses.

They met Dexter and Lumen in real life and on Facebook called.

It develops the story in a macabre partnership between Dexter and Lumen which then begins with murder.

They are attracted to each other due to the “dark passengers” or dark side of their personality that they recognize and nurture each other.

Is it free speech for Dexter’s producers to create television programming that reportedly inspires murderers — including being cited by “Andrew Berwick” before he committed a mass murder? Absolutely.

Is it hypocritical of publications across Europe — and America — to accuse those whose writings are against violence, of influencing Berwick/Breivik, while saying nothing about his enthusiasm for a program reported to have influenced at least three other murderers?

Actually, I’m just curious. If asked by someone in the media or law enforcement about the Norway mass murderer’s enthusiasm for their show — what will Showtime, CBS, Daniel Cerone, Clyde Phillips, Melissa Rosenberg, Clyde Phillips, Chip Johannessen and Michael C. Hall say? That they are not responsible for being watched and cited in a madman’s ranting?

But then, if they are not responsible — if this trendy brutal show’s producers and writers are not responsible for influencing Breivik — then why are the media holding responsible these other political leaders, writers, human rights activists and journalists worldwide who oppose brutality rather than making a buck off it?

That’s the question posed by the Dexter Factor.