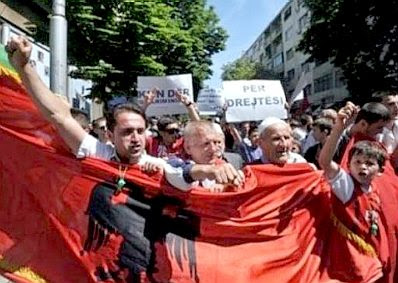 A reader from Western Europe sends this report on the creeping Islamization of Macedonia and other parts of the Balkans that happen to lie within the prospective borders of a Greater Albania:

I am a regular reader of your blog and first of all would like to thank you for gathering news on what the mainstream media are keeping from the average ignorant law-abiding citizen of the (Western) world.

In the past I have seen some posts regarding issues in the Balkans, both in historical matter and in events that are taking place today (e.g. the Bulgarian stand-up against that mosque). Personally I have a link with another Balkan country, Macedonia, since my wife is a native Macedonian. What saddens me is that this is a country with good people and a very rich history, and they are under a combination of pressure from the EU and an invasion of (Muslim) Albanians. I feel the Macedonians are now doomed to drown in their own tolerance. 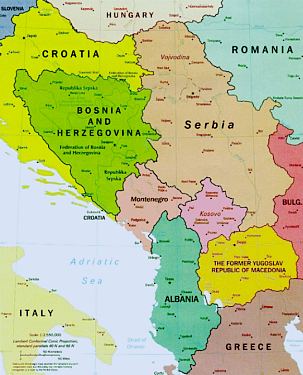 Let me give you some examples about why I am worried for this country and, considering its geographical situation, why this is important for Europe (but unfortunately unknown to most people…).

Earlier this year there were elections in Macedonia. When I was there on a trip I noticed something interesting on the local television: people with small arms (mainly AK-47s and handguns) taking positions at election stations. I asked my wife what that was all about…

…and she answered that this was just some footage from the former elections. She also translated a news item for me that showed leaders of the main parties that represent Albanian minorities: they had just signed a covenant that this year there would be no such violence during the elections. She explained to me that it is quite normal for the Albanian (Muslim) minority to keep ethnic Macedonians from voting, so that in that district the Albanian (Muslim) parties would win, by any means necessary. There must be sources on the Internet that can support this, but must Macedonian news is of course in Macedonian Cyrillic, which makes it a bit hard to find.

Another example from this year: In Skopje, the capital of Macedonia there was a church/museum being built on the site of an old fortress located in the Albanian Muslim controlled area of Skopje better known as the Bazaar. Protesters gathered there, because they did not want a church/museum built on “their” terrain, and violence broke out. Since then this marvelous place has been sealed off from the public and guarded by armored police cars. An interesting detail: one of the Albanian Muslim protesters who was arrested was a top advisor to the Dutch ambassador and a member of one of the Albanian parties running in the elections.

Today it was announced that the Albanian flag can now officially be raised in areas where the Albanian minority has reached 50% or more (note the contradiction in terms). I was shocked to read that… They are truly being colonized, and the EU is standing by and letting it happen, and even supporting the Albanian cause!

On my last trip, we crossed a construction site for a mosque in the area around the national park Matka. A mosque was being built there. Nowhere in this area will you find Macedonian flags, only Albanian flags. Hardly any women on the street (in a five-hour drive I could count the women I saw on one hand, while the streets were packed with men and boys who did not seem very happy to see obvious northwestern European faces there).

At this mosque construction site there were two flags waving: the Albanian flag and the green jihad flag of which the origin to me us unknown (I am no expert). This quite shocked me: remember that this is a location close to the capital, yet you would think you were in some sharia-controlled hellhole of the Third World.

Remember what happened with Kosovo declaring “independence” in 2008? The only thing I saw then was the waving of Albanian flags, and if you check this map from Wikipedia, that makes sense: they already claimed Kosovo for what they call Greater Albania. Now, I know that every Balkan state has this situation on their borders (they were all scattered and patched up again over centuries), but from recent historical facts I believe that the Albanians are actually making a move and stepping up their plans to re-establish dominance in the area.

Why is this important? Well, if you dig a little in unclassified and perhaps (if you can get your hands on them) classified intelligence reports on organised crime and Muslim extremism in Europe, you will find an interesting link that leads back to Albania and Kosovo. Some of them even hint (to use a mild term) of the involvement of Al Qaeda in that region. With Greece going to hell financially, the bridge towards the other end of the Mediterranean is easily made (read: Turkey).

In my opinion Bulgaria, which is also protesting against their own Muslim minority, would at least have some kind of ground. Macedonia is in between, and is being overrun as I type.

Imagine: the Yugoslav wars all over again could be the spark that blasts Europe into total civil war.

3 thoughts on “The Albanianization of Macedonia”