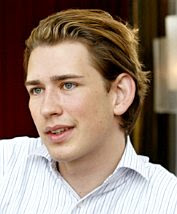 Back in April, our Austrian correspondent Elisabeth Sabaditsch-Wolff reported on the appointment of a twenty-four-year-old, Sebastian Kurz, to the important position of assistant to the new interior minister. One of Mr. Kurz’ principal responsibilities is “integration” — that is, the attempt to somehow shoehorn all those Muslim immigrants into Austrian society without violating the strict tenets of Multiculturalism.

Sebastian Kurz is Elisabeth’s former student, so she knows him better than do most Austrians. After Elisabeth’s less-than-flattering piece was published here, some of our commenters cautioned us not to judge the man simply because of his youth, but to wait and see if he could handle the job.

Three months have passed, and there is still no sign that any “integration” — or, God forbid, “assimilation” — is ever going to take place in Modern Multicultural Austria. Our Austrian correspondent Zam sends a translation of the latest news on Sebastian Kurz and the progress of “integration”. The translator includes this explanatory note concerning the proposed forcible mixture of culture-enrichers with indigenous Austrians:

I don’t normally have the patience (and skill) to translate articles from the newspapers in our beloved multiracial Austria, but this one seemed so utterly preposterous that I had to do it. It’s a shortened version of the whole article, but it speaks volumes about the thinking of the newly established State Secretary for Integration in Austria, Sebastian Kurz.

Of course, the “mixture” as proposed in this context means that Turkish families are planted in the midst of the few Austrian ones who still have claims on the public utility, and we all know what the effect will be: bullying and harassment.

His translation from Die Presse:

Vienna. The less fancy paraphrase is: “formation of ghettoes”. 80% of migrants reside in 10% of Austria’s communes, predominantly in the big cities — mostly in flats owned by the public utility. Endemic difficulties within this are widely known: there is a lack of necessary “intermixture” of the population, finds the expert council on integration. It therefore suggests the establishment of a “committee for housing space” that would look after a balanced allocation.

It is one of twenty suggestions from the report on integration, which was presented on Wednesday by state secretary Sebastian Kurz (ÖVP) and the chairman of the expert council on integration, Heinz Fassmann. […]

There’s no timeline yet for the measure, says Kurz. “We will work step by step on the implementation”.

Elisabeth Sabaditsch-Wolff has more to say on the same topic:

Sebastian Kurz, the new star in the current Austrian ruling elite, has been busy listening to everyone on the street and in the NGO world explain their ideas on integration matters. One group he didn’t seek out was the Wiener Akademikerbund — naturally, one might say, since the WAB has the most experience and the best ideas.

So it is not surprising that I, as one of Sebastian’s former teachers, have remained silent and listened and watched Sebastian. The more I watched and listened, the more dismayed I became. And the more I felt like exploding one morning last week when I read about the ideas presented by Sebastian and “integration” experts. My response was to send the new minister an email.

Needless to say, I never received a reply. Why should he reply? It’s not like he cares. His salary will be paid punctually on the first of every month and he will join the chorus of ÖVP politicians lamenting yet another election loss.

Below is the text of her email, as translated by JLH:

From: ESW
Subject: It’s me — your TOEFL teacher
to: staatssekretaer@bmi.gv.at
Date: Wednesday, July 6, 2011

I promised myself I would not comment on your agenda (except to congratulate you on the advancement of your career — which I can also do with this e-mail), but today’s article in ÖSTERREICH forces me to it. I also realize that my words can influence nothing, because the gap between the government’s agenda and those of us “down below” cannot be bridged. For a long time, I have given you that chance so many want. I have listened to you. In the same way, I studied your interviews, But today’s ÖSTERREICH — or what was in it — was the last straw. I am furious. Why? Here are my reasons:

In conclusion, my dear Sebastian, I cannot believe that I have to be so worked up at seven in the morning on a beautiful summer day. How many more millions are we going to throw away on the (non-Filipino, non-German) immigrants? That is my money and my daughter’s money that is being wasted.

Did you read Mein Kampf in school? Yes? Then read the Koran. If you get nothing from my words here and think, this crazy woman (as if I care), at least read the Koran. It will be worth your while. As a taxpayer, I expect that from you.

Maria Stückler, a university professor and an anti-jihad activist, was copied on the same email. Her reply provides an additional take on the new minister’s ideas (also translated by JLH):

The entire litany reveals a political failure of the first order:

And that, after a good forty years of immigration (which has not been called that for a long time).

Doesn’t anyone wonder what people are doing in Austria, who aren’t even prepared to learn the language? There are only two answers to that:

To plunder or conquer the natives.

Aside from that, the refusal to learn the language of the country is naked racism — it is clear that they want nothing to do with the local people.

2. Training of imams in Austria and preaching in German

It does not matter whether the imams are trained in Austria or not, whether they preach in German or not. Imams can always and only preach the Koran, it will not change because of these measures. The only result will be heavier costs for us. But to know that, our “representatives” have to read the Koran, and not act like the proverbial three monkeys.

Just the fact that policy required forty years to make these self-evident demands reveals the whole problem with the decades-long dialogue industry.

It is not dialogue we need, but strict demands oriented to the interests of the native population.

And whoever does not fulfill them must be deported.

The prime function of the state is not serving foreigners, but guaranteeing the internal and external security of its own people, who are, nominally anyway, the sovereign power. To this central task of the state, everything else — especially immigration policy — must be subordinated.

17 thoughts on ““Integration”, “Intercultural Dialogue”, and the Failure of the Austrian State”