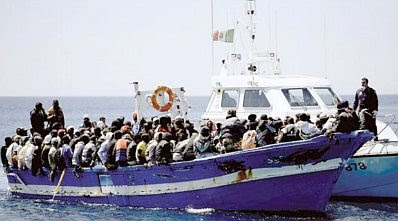 The Recent Unpleasantness delayed my posting these two articles, which came in a couple of days ago. They are slightly different accounts of the same series of landings in Lampedusa.

The three boatloads of cultural enrichment delivered 611 migrants to Italy, bringing the year-to-date total to just over 47,000. It’s not enough to warrant an update of the Cultural Enrichment Thermometer, but still ten times as many as the Italians are permitted to repatriate within the same time period.

There’s no indication of the refugees’ countries of origin:

(AGI) Lampedusa — 3 boats with immigrants made landfall on Lampedusa in only a few hours. According to Coast Guard sources, the refugees that landed on the island between late last night and early this morning are 611 in all. The first boat was carrying 174 persons, the second 249 and the third 188, all of which included women and children.

(ANSAmed) — Lampedusa (agrigento), June 30 — More boats carrying immigrants have landed on Lampedusa after weather conditions began improving yesterday. A large boat with 170 migrants as passengers, including 24 women and 4 children, landed just before midnight on the island, while a second boat carrying about a hundred people and escorted by Coast Guard patrol boats will soon be reaching the port. Yesterday another 533 refugees who had left from Libya arrived on the island. The boat which reached the port in the morning was carrying 249 people, while 188 were instead immigrants intercepted on a third boat which experienced difficulties 18 miles off Lampedusa and was aided by port authorities patrol boats and those of the Coast Guard. Among the 437 migrants who arrived today there are 25 women and 7 children.