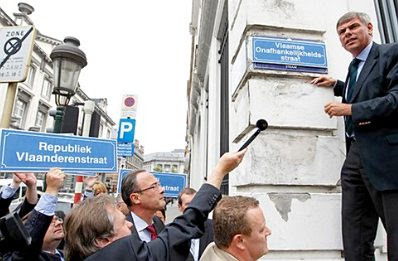 Long-time readers will remember a notorious incident on September 11th, 2007, in Schuman Square in Brussels. On that occasion, leaders of the Flemish independence party Vlaams Belang were assaulted, knocked to the ground, surrounded by jack-booted police, handcuffed, and taken away to jail.

Their crime? Peacefully protesting the Islamization of Flanders.

The jackboots, handcuffs, and paddy wagons were back in force again today in Brussels, almost four years later. This time the leaders of Vlaams Belang were chased down and arrested for putting up street signs declaring an independent Flanders.

The article below is from Svenska Dagbladet. Many thanks to Reinhard of ICLA for the translation:

The entire party leadership and about twenty elected politicians belonging to the Flemish right wing extremist and separatist party Vlaams Belang were arrested by Belgian police Tuesday, when they declared Flemish independence and renamed the street outside the Parliament Building “Flemish Independence Street”. 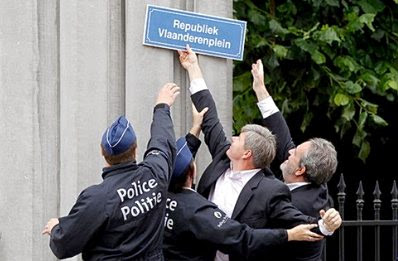 The stunt had been announced on the first anniversary of Belgium’s last national election. Since the 13th of June last year the country has been without a government, since the parties have been unable to decide on who would form a government or what direction should be taken by a coalition government consisting of the winners in the different parts of the country. 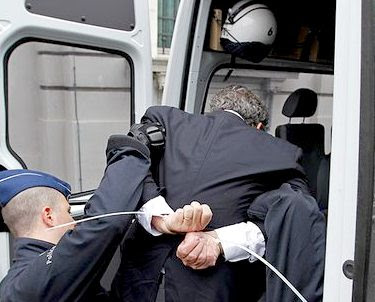 Two road signs on the street Rue de la Loi (“Street of the Law”) outside the building where the caretaker prime minister Yves Leterme has his offices, Leterme himself being Flemish, were covered and replaced by the sign “Vlaamse onhanfhankelijkheidsstraat” (“Flemish Independence Street”) and “Republiek Vlaanderenstraat” (Flemish Republic Street”). 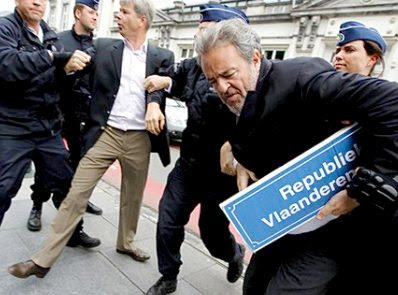 Police allowed the well-known party member Filip Dewinter to uncover the first sign and hold a speech in which he declared that Belgium is more bankrupt than ever, and that the only solution is an independent Flanders. When the group tried to move down the street the police got between them. In the chaos that followed about twenty party members and three persons on the party board were arrested, including Dewinter. 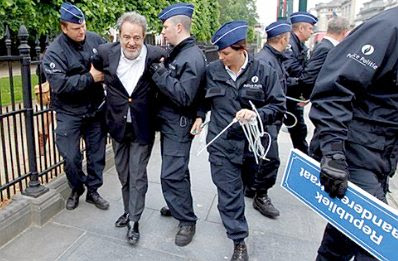 The party board member Tanguy Veys eluded the police with an impressive sprint, and had time to unveil another sign on a side street before he was engulfed by the crowds in the street. Those arrested were later released.

9 thoughts on “Handcuffs and Jackboots Await an Independent Flanders”