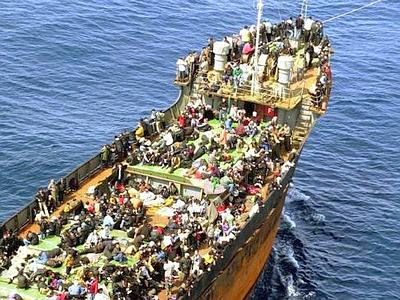 Only one boatload of migrants has arrived in Italy since my last report. This one had fifty-two culture-enrichers on board, and landed on the coast of Salento, right at the tip of the “heel” of the Italian boot.

As is generally the case with arrivals on the Italian mainland, particularly in Apulia, the refugees did not originate in North Africa. Since they are Afghans and Iranians, it seems likely that they came in through Anatolia, via Greece or the Balkans.

Boat With 52 on Board Intercepted Near Apulia

(AGI) Lecce — A boat carrying 52 immigrants was intercepted off the coast of the Salento area in Apulia. Police helicopters and patrol boats spotted the 15 meter long vessel around 10 miles from Santa Maria dei Leuca as it sailed towards the coast; the boat was accosted by coastal patrol and escorted to the port in Otranto. The immigrants, among whom were 3 women and 9 minors who are presumed to be of Iranian and Afghan nationality so far, were then taken to the Don Tonino Bello reception centre in Otranto for identification procedures.

The total number of refugees arriving in Italy since the beginning of the year remains at something between 39,000 and 40,000. This latest addition does not affect the total enough to warrant an update of the Cultural Enrichment Thermometer.

The rest of tonight’s articles concern the political wrangling, infighting, and blame-slinging among various European nations. We’ll begin with another follow-up on the migrant boat that sank a week or so ago off the coast of Tunisia:

Tunisian authorities continue to recover the bodies of victims from the migrant boat that capsized off the coast of the Kerkennah islands last week. TAP reported that 26 additional bodies were recovered on Sunday, 5 June. Poor weather conditions on Sunday made recovery operations difficult. According to TAP, 577 persons were rescued from the boat and 200 to 270 persons are believed to have drowned. There are conflicting media reports regarding the numbers of confirmed deaths. Some reports indicate that at least 150 bodies have been recovered in addition to the 26 bodies reportedly recovered on 5 June.

The boat, named The Wave, ran around last week, probably on Wednesday, 1 June. The boat did not capsize until after rescue boats had arrived on the scene. Tunisian coast guard and local fishing boats were involved in the rescue efforts. The rescue boats did not have the capacity to rescue all of the migrants from the stranded migrant boat and some people jumped into the water and others moved to one side of the migrant boat causing it to capsize. Media pictures show the vessel in an upright position with some rescue boats already on scene. A France24 video report contains cell phone video shot immediately after the boat capsized. (See pictures below.)

UNHCR and IOM staff have conducted interviews with some of the survivors. According to UNHCR, the boat left Tripoli on 28 May with up to 850 people on board. The passengers were primarily from West Africa, Pakistan, and Bangladesh. The crew was recruited on an ad hoc basis and had little or no maritime experience. The France24 video report states that survivors said Libyan military assisted them in leaving Libya. The boat became lost after leaving Tripoli and on Wednesday, 1 June, it ran around near the Kerkennah islands. UNHCR spokesman Adrian Edwards said that the boat “capsized as desperate passengers rushed to one side, seeking rescue by the Tunisian coast guard and fishing boats that had approached the vessel. Many fell into the water.” IOM staff reported that at least one survivor said that during the boat’s voyage some people were thrown overboard alive. The boat reportedly had run out of food and water.

I recommend a visit to the original blog post to see photos of the boat in the process of capsizing.

Now it’s time to assign blame for this and other migrant-related disasters. Who do you think is responsible for all the injuries and deaths that befall the Mediterranean boat people? Hint: it’s not the Patagonians.

From The Times of Malta:

There was a need to radically increase air surveillance along the Libyan coast and further out to spot any fragile vessels at sea and safely prepare a rescue, The Council of Europe’s Commissioner for Human Rights Thomas Hammarberg said.

In his latest human rights comment published today, Mr Hammarberg said that the imperative principle of “rescue at sea” must not only be respected for those close to a sinking ship;

“In view of the ongoing military operations it would be difficult to argue that there are no resources for such reconnaissance activity.

“Indeed, the escalation of the armed conflict has contributed to the acute situation of the sub-Saharan migrants.”

Mr Hammarberg said that European governments and institutions have more responsibility for this crisis than they have demonstrated so far.

“Their silence and passivity are difficult to accept.

“When preventing migrants from coming has become more important than saving lives, something has gone dramatically wrong,” he said.

The commissioner pointed out that least another 150 persons drowned, while others were saved this week. In a similar tragedy in May, about 600 persons lost their lives and there were other reports about missing vessels with migrants on board.

It likely that the death toll for this year has now reached 1 400, or perhaps even more.

Mr Hammarberg said that the drowning tragedies in the Mediterranean were not a new phenomenon; there have been many such incidents over recent years.

“Gone are the days when Gaddafi co-operated with European governments — in exchange for generous aid and investments — to prevent even the most desperate asylum seekers from reaching Europe,” Mr Hammarberg said.

A recurring feature of the “Camp of the Saints” crisis is the squabble between Italy and Malta over which country is doing its duty towards the refugees, and which is shirking. The Italian foreign minister says that Malta is standing on the sidelines, doing nothing:

Italy yesterday lambasted Malta for being “just a spectator” to the exodus of immigrants from Libya seeking refuge in Europe, further stoking the simmering dispute between the two countries.

The Italian government also claimed it was gathering evidence that the Libyan government was behind the current crossings of irregular migration towards Europe.

The latest accusations against Malta were made by Italy’s Foreign Affairs Minister Franco Frattini during an interview published in the Italian newspaper Corriere Della Sera.

He said Italy had to report Malta to the EU as he claimed the island was not doing its part to save the lives of hundreds of immigrants crossing its vast search and rescue area (SAR).

“We had to report Malta as in many instances the Maltese authorities are just looking at the problem and not giving any help when immigrants are in Malta’s SAR waters,” Mr Frattini charged.

Insisting Italy was prepared to do all it could to save lives, Mr Frattini said the Italian government had ordered its rescue services to intervene and save lives in all circumstances, even in faraway seas and in areas which were not directly in its responsibility.

Brussels has not reacted to Italy’s accusations against Malta, saying only that the two countries should continue to collaborate on rescue missions in the Mediterranean.

Malta and Italy have been at loggerheads in the past years over the interpretation of international maritime rules connected with SAR operations.

Mr. Frattini also points a finger at Col. Muammar Qheddafi, correctly assigning responsibility for the bulk of the crisis to the Libyan dictator. Col. Qadafi deliberately unleashed a flood of refugees on Europe, particularly Italy, in revenge for the NATO air war:

In his interview, Mr Frattini – a former European Commissioner responsible for Home Affairs – also upped his ante against Libya saying the Libyan regime was behind the current migration flow.

“We are gathering evidence that the Libyan regime is behind this wave of illegal immigration as a reaction against Europe on the Nato intervention. People arriving in Lampedusa from Libya are saying they were forced onto boats and that they had not paid anything to cross over to Europe,” he said.

According to Mr Frattini, if these allegations are true, there could be a case against Libya before the ICC for crimes against humanity.

Malta has a thing or two to say in response:

Home affairs and justice minister Carm Mifsud Bonnici has hit back at Italy’s foreign minister Franco Frattini who accused Malta of ‘not doing its part’ to save the lives of migrants fleeing Libya.

In his reply, Carm Mifsud Bonnici said that Frattini had not been factual in his statements.

“Had he been so, the Armed Forces of Malta would not have rescued 1,530 people since the Libyan crisis started, including a group of 76 persons who escaped from Misurata on a fishing trawler last week.”

The above paragraph is useful, giving us a working total for the number of culture-enrichers to arrive in Malta since January. Italy has received upwards of 40,000 migrants during the same time period, so it’s understandable that the Italians find the 1,530 picked up by Malta to be paltry in comparison.

However, consider the relative sizes of the two countries. Malta is a tiny island, with a land area of 122 square miles, which is just over one tenth of one percent of Italy’s 116,304 square miles. If the Italians had taken in a proportionate number of refugees, their camps would contain about 1.46 million temporary detainees by now.

So the Maltese may have a point.

While stressing that Malta had “taken note” of Frattini’s comments, he insisted that the Maltese government “serenely awaited” any communication from Rome or other relevant authorities to prove the above by answering in full and stating the facts.

Issues between Malta and Italy over migrant rescues in the Mediterranean have continued over the past hours, with the Northern League Venetian governor and fisheries minister Luca Zaia stressing that “Catholic Malta cannot afford to leave migrants die at sea.”

Our final article moves a bit farther afield, to the United Kingdom. The British are concerned that the North African culture-enrichers who have made it to France may be passed on to Great Britain.

The British Home Secretary says that her country will decline to accept them:

The Home Secretary, visiting France to inspect cross-Channel border controls, said there was no evidence yet that refugees from the Arab Spring had arrived in this country. But she added: “We do need to look ahead to what might be happening in the future.”

Thousands of migrants from Tunisia and Libya have crossed by sea to Italy, with many heading for France. Italy handed more than 25,000 Tunisians temporary permits to travel, effectively giving them unobstructed travel around much of the European Union.

Ms May has said that the Government is not prepared to “share the burden” of accommodating the new arrivals. “We need lasting practical co-operation and not burden-sharing,” she said. “We very much feel we need to be working with countries in North Africa, like Tunisia, to provide practical support through the EU for them to be able to exercise border controls on their borders.”

Ms May, after holding talks with her French counterpart, the interior minister, Claude Guéant, said joint operations between Britain and France had cut the number of people trying to get to this country from Calais.

“Continued pressure from illegal immigrants in France is a joint problem for both the UK and France and as such requires a joint solution. We are committed to continuing to ensure the border is impenetrable,” she said.

France has had to take in very little of the “Arab Spring” surplus up until now, so any portion that reaches Britain will be minuscule. For the foreseeable future, Italy will bear the brunt of the Mediterranean refugee crisis.

17 thoughts on “Camp of the Saints: The Blame Game”