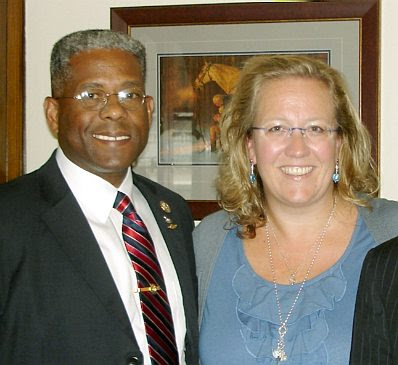 Elisabeth Sabaditsch-Wolff originally met Col. Allen West back in February 2010 at the Freedom Defense Initiative in Washington D.C. She shared a podium with him to discuss the hate-speech case against her for the first time in front of an American audience. Col. West was one of the featured speakers at the event, and the video of his speech went viral on the internet in a number of languages. 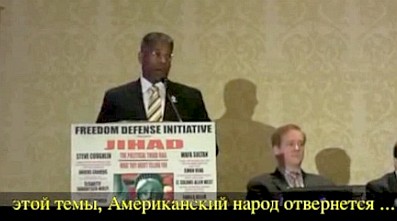 Elisabeth and I renewed our acquaintance with Col. West last Thursday afternoon following ACT! for America’s legislative briefing on Capitol Hill. The Colonel is now a member of Congress representing Florida’s 22nd District, and is perhaps the most knowledgeable and dedicated anti-jihad politician in Congress. We caught up with him that afternoon at his office in the Longworth Building.

We had arranged to meet with Rep. West for three closely-related reasons. First of all, Elisabeth wanted to update him on the status of her case: since she last spoke to him, she had been tried and convicted of “denigration of religious beliefs of a legally recognized religion” for her statements about Mohammed’s sexual proclivities, as evidenced by the consummation of his marriage to a nine-year-old girl. Readers who are unfamiliar with the details of Elisabeth’s case should see the archive for more information.

Our second purpose was to acquaint the congressman with some of the more prominent European political parties that oppose the Islamization of their countries. Col. West already knows Geert Wilders, of course, and there are other parties — some of them relatively new — with whom he may well want to establish a working relationship. Elisabeth and I spoke for a while about several of these parties, and discussed the possibility of his visiting Europe at some point in the future for an on-site look at what is happening.

Our third reason for meeting with him was to present him with a briefing paper on the growing Islamization of Western Europe, and the resulting emergence of social and political resistance to it. This document was designed to be used as a reference for Rep. West when he hears about one of these “Islamophobic” parties in the news, or is contacted by their representatives. It gives an outline of the parties’ current electoral status, and grades each party and organization based on its philosophy, origins, legislative positions, and political allies.

The information we provided can be readily consulted by the congressman and his staff to help them understand the current situation in Europe without relying on biased presentations by the media and EU government bodies. The briefing paper contains better information than the CIA could provide, since it is gathered through grassroots networks in Europe rather than assembled from European media digests.

The data for the paper were collected and written up by various European members of the International Civil Liberties Alliance living in the countries involved. I acted as the overall collator and editor, and also wrote the general introduction. An excerpt:

Except for the Algerians who remained in France at the end of the colonial period, there were few Muslims in Western Europe until full-scale immigration began in the late 1970s and early 1980s. In what is now known to be a deliberate policy of the European Community (today the European Union), the flow of immigrants into Europe accelerated in the 1990s, and exploded in the 2000s, especially in Belgium, France, the Netherlands, Norway, Sweden, and the UK. Each country has its “preferred” sources for Muslim immigrants: Pakistanis for Britain, Algerians and Tunisians for France, Moroccans for Belgium and the Netherlands, and Turks for Germany and Austria.

Exact demographic figures are difficult to come by, since the collection of statistics based on ethnicity or religion is officially discouraged, and is even prohibited in some countries. France, for example, does not allow government agencies to include ethnicity in their data-gathering. Britain collects data on residents’ countries of origin, but lumps together everyone born in the UK as “British”, regardless of parentage.

Estimates of the Muslim current population are therefore largely educated guesses. Activist organizations in various countries have made estimates based on names recorded in hospital birth records, or by statistical evaluation of surnames in telephone directories. The impact of Muslim crime (which is disproportionately high) can be determined by tracking the names of convicted offenders in court records. However, a number of countries prohibit the publication of offenders’ names, so this methodology is not available everywhere.

The population estimates used here are based on a database of figures published in 2004. Current estimates are derived from anecdotal evidence, including the likely level of illegal immigration.

The percentage values derived from the 2004 data, and our estimates of current figures, are summarized in this table:

We also included this note:

It is important to bear in mind that all of the anti-Islamization parties and organizations in Europe are characterized as “extreme right-wing” groups. This is true no matter how socialist they are in their economic policies, nor how progressive they are on social issues, such as gay marriage, global warming, etc. None of that matters — opposition to Islamization is the sole criterion that earns them the descriptor “extreme right-wing”.

That is, an American fiscal conservative might find it hard to make sense of all these “right-wing extremists” in a European context. Many — probably most — of the anti-jihad parties are at least as Socialist as the Democratic Party here in the USA, yet they are staunch opponents of mass immigration, and their leaders are taking enormous risks to buck the EU establishment and resist the Islamization of their countries.

Elisabeth and I are hoping that our efforts will help bridge the murky transatlantic waters between anti-jihad political leaders in America and Europe. The lack of understanding runs in both directions, and with luck we will someday get the opportunity to present the American perspective to receptive audiences in Europe.

16 thoughts on “A Briefing on the European Counterjihad”