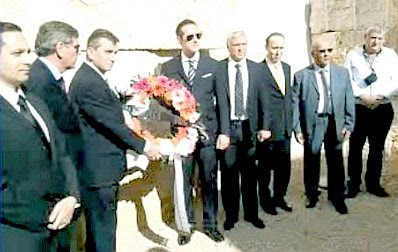 Yesterday was “too much gardening”-itis. My pain levels prevented me from getting to the computer, much less sitting in front of it.

The reasons for this sudden rise in pain are several, but the main one is not the amount of yard work I did. The underlying reason may well be physical work combined with how much tension I’ve been holding since I read Obama’s death threat to Israel the other day.

Yeah, now he’s trying to walk that one back, but I don’t believe him. He may be the least credible politician in recent memory, and given the sad list of mediocrities amongst our Political Class, that’s saying something. However, what it says isn’t anything one could repeat on a PG-13 blog.

I wrote a thank you note to one of our donors in Israel. Her donation had come in well before our Death Dealer issued his notorious “bring back the 1967 borders” command, but by the time I reached her name, he’d done gone and opened his mouth.

As those of you who donate know well, my acknowledgements often tend to be free-associations. Kind of whatever is going through my mind when I sit down to say thank you. In this case my gratitude turned into a rant. It has gotten to the point that if I don’t stay angry I will be reduced to impotent sorrow. I’d rather remain furious than permit this man’s wrong-headed ideas about our domestic and foreign policies to sink in fully. He could well leave America destitute and/or make of the Middle East a smoking ruin.

Our donor sent back this response (and I later got her permission to use it):

The “rant “is quite understandable, really…I am carried away too when I speak about things I am passionate about.

Frankly, I would not be able to say anything in a polite way about Obama. I have no idea how Netanyahu manages to be polite to this openly hostile man.

Right now I am being very afraid. I thought times are bad for Israel, but it looks like I was too optimistic.

My daughter is to be drafted next year into the army — she will be 18 and it is the law of the land. Most likely she will serve her country when the next war breaks. I am terrified of losing her. I am torn between my principles — stay and defend — and the basic instinct of protecting my child from the imminent danger.

I do thank you for your kind words, I know that you are with me, though very far away.

Yes, I am indeed with her, and with all the other Israeli mothers who face her awful choice. So many of them must be asking themselves the same question that haunts her:

Should I save my child by running, or must I answer a higher calling to stay and defend my country with the life of my child? The former ‘choice’ is a hardwired feature of parenthood; there is no escaping that intense, animal desire. However, sentient beings can override their instincts to make hard decisions which answer to the perennial question: will my people survive?

Mothers of soldiers do this all the time. Nor is the choice ever laid conclusively to rest. Either way one questions the wisdom of her choosing over and over again. For those who take a deep breath and let their children go, each morning along with her waking routines a mother wonders again if she has done the right thing. And she will continue to question herself until her child returns safely home.

With those who choose shelter and safety over valor, I have no quarrel. Ultimately it must be the child’s choice but mothers can influence those choices to some extent and those who manage to override their son’s or daughter’s courage must then live with themselves. For them, it is never over; the questions that come “in the deep dark night of the soul when it is always three o’clock in the morning” will follow them for the remainder of their lives.

That is why Obama’s sacrifice of Israel to the demands of the so-called Palestinians — a political travesty if there ever was one — seems so cruel and senseless to this questioning mother. When is it enough?

With her, I am glad Prime Minister Netanyahu stood up to Obama. It was a proud moment for Israel. As this kabuki theatre plays itself out, we can only stand and wait. The Baron reminds me that Israel is not entirely alone but as he says, the ranks of her defenders are thinning. Of those who remain how many can be of practical help? Australia is pro-Israel; Canada’s Harper is also, though the permanent bureaucracy in our northern neighbor’s government is not; Denmark would stand with her, but how much practical help will that buy? Italy has never been particularly anti-Semitic, but it has to dance with the Arabs for the foreseeable future.

I hate this. Yes, I know all the arguments about dealing with reality, about Israel having to play the cards it was dealt, etc., etc. but that doesn’t help in coming to terms with a tragedy. With Rachel, I will continue to weep for her children — at least when I’m not throwing darts at images of O.

A good day for donations!

7 thoughts on “Rage or Sorrow?”