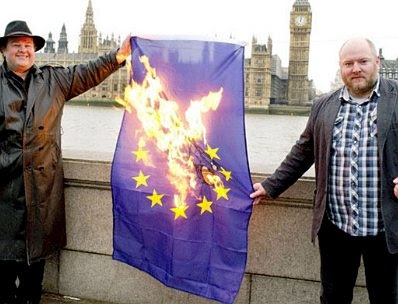 The photo above really warms my heart, just as I can imagine warming my hands over those lovely synthetic-fabric flames. There’s nothing quite so cozy as a brightly burning EU flag.

Those fellows may be in serious violation of EU laws, however. Especially if they are government employees: they may even be required to kiss that flag rather than burn it.

In the article below, you’ll notice that a Tory cabinet minister objects to the flag-worshipping orders from Brussels. Unfortunately, the substance of his objection is that “this is unnecessary and pointless red tape.”

In other words, if he thought that flag-worship were necessary or had a point in some fashion, he’d be completely OK with it.

And that’s from a “Conservative”. God help Britain.

According to The Express:

EUROCRATS last night faced an angry revolt over attempts to force Britain to celebrate the EU’s Europe Day next week.

Scores of public buildings around the country are being ordered to fly the blue-and-gold European Union flag to mark the occasion next Monday.

Officials will be expected to ensure the flag remains hoisted for a week, with a swingeing fine from Brussels threatened for those that disobey.

Astonishingly, they even have to take a photograph of the flag flying and email it to the European Commission to ensure the regulations are being observed.

Schools are also being sent instructions from the European Parliament on how to celebrate Europe Day. Recommendations include assemblies with an EU theme for all pupils and even setting up a European Cafe that only accepts euros.

He said: “Not only is it unacceptable to threaten to fine people for not flying a flag, this is unnecessary and pointless red tape. The European Union should be focusing on ensuring that taxpayers are receiving value for money, and clamping down on fraud and corruption in EU-funded projects.”

Other critics last night rubbished the “pointless waste” of time and money.

Charlotte Linacre, campaign manager at the TaxPayers’ Alliance pressure group, said: “Taxpayers would have more to celebrate if the EU stopped dreaming up ways to splurge cash. These events and rules are pointless backslapping and will land taxpayers with more unnecessary bills. When public spending here is under scrutiny, it is infuriating to see the EU continue to spend oblivious to the need for restraint.”

The Daily Express crusade to get Britain out of the EU has won massive support. We delivered a petition of 373,000 signatures from readers demanding a referendum on Britain’s membership of the EU to 10 Downing Street earlier this year.

Europe Day, held on May 9 every year, was decreed by an EU summit in 1985 to establish an annual celebration of the “achievements” of Brussels.

Mr Pickles’s Department for Communities and Local Government at Eland House, Westminster is a site where the flag must fly because of its role managing expenditure by the European Regional Development Fund.

It is understood ministers will not defy the edict because breaching the regulations could lead to taxpayers’ cash being wasted on paying Brussels fines. A spokeswoman for the Department said: “There are two flag poles outside the departmental building of Eland House, and it is the policy of the department always to fly the United Kingdom’s Union Flag in the superior position.”

The leaflet for schools across the UK is from the UK Office of the European Parliament entitled: “A few ideas on how to celebrate Europe Day.”

Advice includes: “Hold an assembly on the meaning of Europe Day.

“Set up a European cafe in school using Euros/European currencies and arrange a lunch. Learn the national anthems of other EU member states and sing songs of European origin. Write a short story about Europe.”

Many EU-subsidised public bodies including universities and quangos are also holding events to mark Europe Day.

Last night a spokesman for the European Commission’s office in London said the only official event in the UK would be a free classical music concert in the capital costing around £20,000, marking Hungary’s presidency of the EU.