Everybody Draw Mohammed Day now seems like a million years ago, but it was really just one year ago today — May 20, 2010 — when Molly Norris’ ironic inspiration caused the world’s 7.8 quintillion Muslims to enter a state of apoplectic outrage.

Or rather, to re-enter a state of apoplectic outrage.

Or, to be even more precise, to ratchet up their permanent state of outrage from “apoplectic” to “utterly deranged”.

Last year’s Everybody Draw Mohammed Day was billed as the “first annual”, but it seems to have fallen down the memory hole in the interim — as far as I can tell, no one else is observing it today.

But we’re stalwarts here at Gates of Vienna, so: let today be the Second Annual Everybody Draw Mohammed Day!

In honor of the occasion, I present this excellent original drawing by Proud Kafir, who produced a much better image than I could ever create: 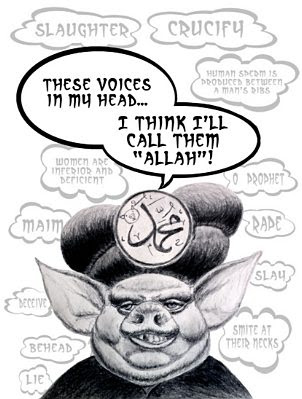 So here we are, one year later, and nothing much has changed.

President Obama continues to grovel in his repeated attempts to placate them.

Merely thinking about burning a Koran can cause the deaths of thousands.

Nobody who wants to retain his standing as a public figure dares to mock, depict, criticize, or say anything remotely disrespectful about Mohammed.

And Molly Norris is presumably still living under an assumed name.

4 thoughts on “Everybody Draw Mohammed Day: One Year Later”