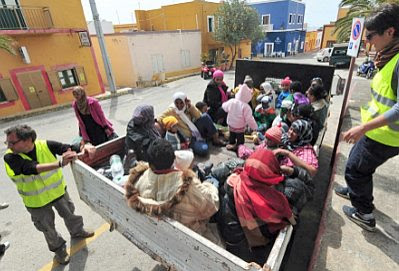 In the comments on last night’s “Camp of the Saints” post, Zenster used my corrected figure of 30,000 refugees as the jumping-off point for an analysis of how much the Mediterranean migrant crisis has cost Italy since it began in January.

Bear in mind that 30,000 is low-balling the numbers. I began with the figure 27,000, which was cited by the Italian government early in April. Since then there have been thousands of new arrivals, with a conservative estimate bringing the total to at least 30,000.

However, given the reported arrivals during the last few days, the number is more likely to be 32,000-33,000, and could even be considerably higher. It’s hard to tell, because some reports are obviously duplicates of others, and the Italians haven’t released an official figure in weeks.

In any case, Zenster used the 30,000 figure to do the following calculations:

Who here thinks that any single one of these arrivals will cost only €10,000 per year? Let’s be more realistic and crank it up to €25,000 in benefits per year, plus the original processing costs.

Does anyone think that large numbers of these individuals will remain well-behaved newcomers and not indulge in their traditional criminal behavior?

Remember, lawyers, judges, police and courtrooms all have very high operating costs. Each criminal case can run an easy €20,000.

Let’s be exceptionally conservative and presume that only 20% of these arrivals will become members of the criminal community. That way, the true number, which is likely to be very much higher, will be correctly reflected if there are loss of benefits while incarcerated. So, using that modest figure of 20% at €20,000 per court case plus jailing. What do we have?

Added to the induction processing plus social benefits payouts, we now are looking at some €900,000,000 for just the first year of these 30,000 people arriving in Europe.

At 120,000 arrivals we are in the realm of four billion euros. Especially when you finally add in the salaries of all those government workers needed to process and track these new arrivals.

Someone please tell me how the working class, better known as taxpayers, along with businesses are supposed to float this sort of lethal tax burden?

More importantly, who is fooling whom about the why and how of introducing so many unskilled and poorly educated people into a highly developed First World environment?

Heaped upon the top-heavy and costly EU bureaucracy that already exists, it is as if these megalomaniac social engineers are simply immune to all logic and reason as they set about the futile task of rescuing the Third World from itself while murdering the EU’s citizenry through the death of a thousand paper cuts. The criminal predations of these newly arrived thugs is just icing on the already poisoned cake.

14 thoughts on “Camp of the Saints: The Money Game”