Long-time readers are familiar with Lars Vilks, the Swedish artist who created “The Prophet as a Roundabout Dog” back in 2007, and thereby earned himself the undying enmity of the world’s 4.77 septillion Muslims. In the four years since then the artist has experienced the sharp end of the Religion of Peace: he was assaulted during a public lecture, his house was firebombed, and a group of international mujahideen were busted for plotting to assassinate him.

Mr. Vilks has also become persona non grata within the Swedish art world. The aestheticians of Sweden — and all Western countries — proclaim the importance of transgressive art and the unalienable right to free expression, yet blanch at the thought of anything that might annoy Muslims. Pushing the envelope is all very well, but being blown up or having one’s head sawed off — that’s another matter entirely. Free speech has its limits, don’t you know.

The latest indignity suffered by Lars Vilks was recently inflicted by Bukowski’s auction house, which organized a charity auction for the 29th of March. The sponsors asked the artist if he could contribute one of his works to support organizations working against HIV, so he sent a drawing. Unfortunately, Bukowski’s received so many angry responses that they decided to remove his piece from the auction. 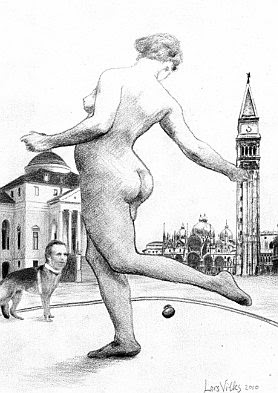 
Here’s the story from Lars Vilks’ website, as translated by Reinhard of ICLA:

“Art has always been able to speak about difficult things and overcome taboos”, says Michael Storåkers, vice president of Bukowski’s. It has happened before, but when it happens it can become quite difficult, not least for Bukowski’s. A while back I was asked to donate a work to an auction, the profits from which were to go to help combat the spread of HIV. Of course, I donated a drawing. The drawing includes both a roundabout and a roundabout dog, but can hardly be seen as offensive. Not even if you change tracks and consider the central figure, the roundabout woman which could possibly — in these times — lead to complaints about patriarchal world views and lack of gender perspective.

No, the drawing itself didn’t cause any problems. The problem was that the artist who is so obviously seen as contaminated by being linked to incorrect opinions. Because that was what happened. When my participation was announced to the press the complaints to the auction firm began. My contact there has stated that they tried to resist but that they eventually decided to cave in. The drawing had to be censored because the symbolic value of the artist caused irritation and because there was a clear and present danger.

That’s the lay of the land and it no longer surprises me. Noli me tangere — you can be infected with the art plague.

The Bukowski press release can be read here [in Swedish].

One thought on “Those Islamophobic Roundabouts”