The Danish artist Kurt Westergaard is best known for his iconic “Turban Bomb” cartoon, one of the twelve images of Mohammed which were first published back in 2005 in the newspaper Jyllands-Posten. Several months after the original publication, the twelve cartoons, augmented by additional images which were not part of the twelve (and at least one of which did not even depict Mohammed), were used as a pretext by Muslim provocateurs to incite mass riots abroad. Danish and Norwegian embassies in the Middle East were torched, and a number of people were killed.

The cartoonists were blamed for the violence, of course, rather than the crazed zealots who instigated and committed it. Those are the new rules of multicultural dhimmitude: when Muslims get mad at us and kill people, it’s our fault — even if all we do is draw cartoons.

In the years since, Kurt Westergaard has neither retired from the scene nor avoided further controversy, despite death threats and at least one attempt on his life. He has made the freedom of speech his driving cause, using his own experience as a warning about what everyone in the West will face if we continue to surrender to Islam and its politically correct allies.

Mr. Westergaard has recently formed a joint venture with Erik Guldager and Hans Erling Jensen to establish a new foundation for the purpose of promoting free speech. Hans Erling tells the story:

In connection with the establishment of The Westergaard Foundation we will launch the Free Press 2011 campaign.

It is all about the idea of Freedom of Expression, as expressed historically and administrated today. The intention is to create a discussion about the freedom of expression we in the West know today, and how we see it developing in the future under globalization and all the new challenges that this provides.

“Free Speech 2011” can be used as teaching material or as a framework for seminars, and for discussion forums in organizations, businesses, and institutions. During the development there will be established on-line help with direct contact to experts, where relevant questions are answered with elaboration on the topic.

The development team is happy to receive suggestions, reflections, and of course all kinds of adjustments. We are convinced that the debate about freedom of expression must necessarily be a living process that should never stop, lest we may lose it!

The initial funding will be raised by sales of signed prints of a new drawing by Mr. Westergaard, entitled “Free Speech”: 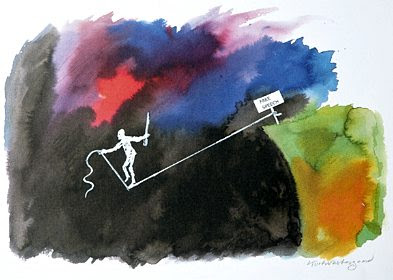 
Each drawing is signed by the artist and come with a certificate linking the buyer to the campaign Free Speech 2011.

Phyllis Chesler has a piece about the Westergaard Foundation at the NewsReal Blog.

Look on our sidebar for the smaller version of the image with an accompanying PayPal icon to purchase your own signed copy.

The press release for Free Speech 2011 is below:

The artist and cartoonist Kurt Westergaard is now establishing a fund to support free speech. The fund is based on the idea that freedom of expression is the cornerstone of democracy, crucial to a dynamic dialogue and development of society.

Kurt Westergaard, who has received numerous national and international awards for his position on free speech, now sells the personally signed print Free Speech for the purpose of financing the Fund — The Westergaard Foundation. A fund for artists and other creative people who are suffering from violence or persecution because of their expressions!

State leaders, Nobel laureates, artists, and especially ordinary people from many parts of the world have in recent years honored and supported Kurt Westergaard, and thus recognised the importance of his persistence and beliefs.

Kurt Westergaard has with the drawing Free Speech, in his usual straightforward manner in colors and symbols, expressed free speech under difficult conditions. The drawing gives rise to reflection and imagination. The kind of imagination where Kurt Westergaard sees it as “the indomitable defender of freedom of expression.”

Once a year, the Board and an Advisory Board nominate five candidates for the prize: the Westergaard Award — a winner will be announced around November / December and a subsequent award ceremony is to take place.

The nominees will all be people who have shown the courage to stand up agains oppression. People who for example through poems, movies, by painting, singing, in theatrical or other artistic creativity showed persistence to remain true to their beliefs notwithstanding violence, prosecution, death threats, etc.

The Free Speech drawing will be sold in most parts of the world for the token price of €100. (US $150) to support the creation of the Fund.

A vendors list can be found at: www.galleri-draupner.dk and: www.eticha.dk

In a short time more can be read at: www.westergaardfoundation.com

The fund consists of a Board and a national and international Advisory Board whose members search around the world for people in the artistic and creative field who by their work have come at odds with a regime, belief, dictatorship or any other form of power that exposes the nominee to assault or threats.

Initially the Board will be composed as follows:

Please be aware that, among others for security reasons, only those reporters, photographers and TV crews can be atmitted who pre-registered in writing. (Press Card to be presented).

2 thoughts on “The Westergaard Foundation and Free Speech Campaign”