A couple of years ago the Swiss People’s Party got itself in hot water by displaying election posters that showed a black sheep (representing criminal immigrants) being kicked out of Switzerland. The image was denounced as “racist”, but the party continued to use it, and did very well in the elections.

Now the Flemish nationalist party Vlaams Belang finds itself in a similar situation in Belgium, only this time it’s a red sheep — a red Turkish-Moroccan sheep, to be precise. Racism once again rears its ugly head! 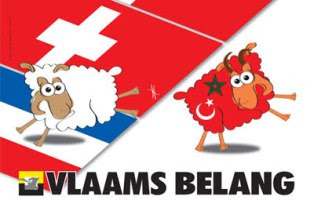 Here’s the report from World Bulletin:

The Turkish Embassy in Brussels has condemned a far-right party after it used posters depicting Turkish and Moroccan immigrants as a sheep being kicked out of Europe. World Bulletin / News Desk

The Turkish Embassy in Brussels has condemned a far-right party after it used posters depicting Turkish and Moroccan immigrants as a sheep being kicked out of Europe.

The poster was presented at a conference of the anti-immigrant Flaman Vlaams Belang party over the weekend. It features a white sheep that symbolizes European states exiling a red sheep with printed flags of Turkey and Morocco. It reportedly is based on a similar poster used earlier in another European country, Switzerland.

Turkish Ambassador to Belgium Murat Ersavcý said in a statement that Turkey condemned the poster, saying it was racist and xenophobic and that it stirs ethnic hatred. “It thus constitutes a crime under Belgian law,” the ambassador said, underlining that Turkey was in contact with the Belgian Foreign Ministry and other authorities to express its objections over and seek action against the poster.

Speaking at the weekend conference, Vlaams Belang leader Bruno Valkeniers said Flemish cities have begun to look like Moroccan cities, with mosques mushrooming all over the region, and called on the Belgian government to shut the country’s doors to immigrants. Valkeniers also proposed the establishment of an anti-immigration network bringing together other like-minded parties across Europe.

Vlaams Belang is only one of the far-right parties denouncing immigration that has been witnessing a surge in their electoral support in the past years in Europe. In liberal Sweden, the far-right Sweden Democrats, a party with a neo-Nazi history, won 20 seats in the parliamentary elections in September. In the Netherlands, the country’s center-right minority government depends on support from anti-Islam politician Geert Wilders’ Party for Freedom, and polls show the party is second only to the Liberals.

7 thoughts on “The Red Sheep of the Family”