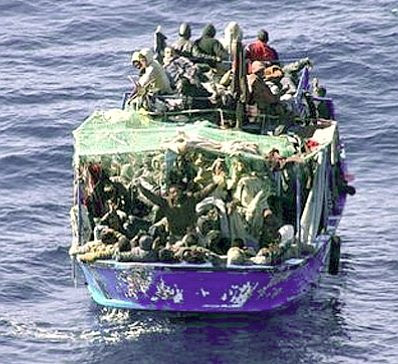 Some 30,000 North African culture-enrichers have arrived in various Italian ports since the refugee crisis began in January. Facilities near the points of landing — which are usually small islands such as Lampedusa — are rapidly overwhelmed, and the Italian authorities evacuate the migrants as quickly as possible to larger camps on Sicily or the Italian mainland.

One of the facilities used for this purpose has been the Kinisia shelter in Trapani, a province of Sicily. The following article describes the camp’s conversion from a “shelter” to a “migration facility” — which I assume means it will become a more permanent residence for enrichers whose immigration status is being evaluated:

(AGI) Trapani – Authorities are to replace the current shelter facility in Trapani’s Kinisia district with immigration facilities. The site has to date been used to shelter as many as 700 Tunisian migrants.

A temporary shelter at an air force facility in Cagliare on Sardinia is being emptied of its inhabitants. These enrichers have been granted travel documents, which are presumably the same permits that have so aggravated France, Austria, Germany, and other EU member states:

(AGI) Cagliari – Air force premises hosting some 700 Tunisians immigrants are gradually being emptied. The immigrants had been transferred to Cagliari from Lampedusa and have been allowed to leave after the issue of 6-month transit permits. A total of 181 left today, after yesterday’s 135 departures. All parties leaving the premises, police confirm, have been granted electronic travel permits.

The French have prevented migrants from crossing the border with Italy at Ventimiglia. But what happens to travelers who embark at a Sardinian port? Can they travel directly to a port in southern France, say (just to pick an example at random) Marseille?

It will be interesting to see where the Cagliare enrichers finally wash up.

Meanwhile, the UK has joined the ranks of EU member states who insist that they will absolutely not accept any of the overflow of Italian cultural enrichment. According to The Telegraph:

UK Will Not Take in Migrants Fleeing Northern Africa, Insists May

Theresa May has insisted she will not take in any of the migrants fleeing turmoil in northern Africa as concerns grow that they could head for UK shores.

The Home Secretary has told her EU counterparts that Britain is not prepared to join any “burden sharing” as tens of thousands of people cross in to Europe, The Daily Telegraph can disclose.

Italy, where the refugees are arriving on a daily basis, has urged its EU partners to help ease the pressure by accepting some of the migrants.

But at a meeting of her justice and home affairs counterparts last week Mrs May said Britain will only offer support to Italy to help deal with the issue there.

She will repeat her firm stance when the EU Justice and Home Affairs Council meets again next month.

It came as British MEPs warned migrants could head for Britain because it is seen as a soft option and called for action to stop camps building up at Calais.

Gerard Batten, the Ukip MEP for London, said: “People are going to gravitate to Britain.

“Britain is top of the list because we have one of the most generous welfare benefits systems and we are famous for being a soft touch.

“I don’t have any confidence in the authorities doing anything to stop them coming in.

““There is a human crisis, but the approach of giving people residence permits will make things permanent, rather than encourage people to return home when peace in Libya and the whole of north Africa finally returns.

“The problem here for us is the European borderless state.”

The growing tensions in Europe has put the Schengen agreement under threat.

Along with France, the Netherlands, Belgium, Austria and Germany are understood to be considering reintroducing some border checks.

The current situation is not stable. Italy cannot continue to take in thousands of refugees a month, even if the EU pays a large part of the expenses associated with the holding-camp system. The problem isn’t just financial: mass immigration rends the social fabric of any country required to absorb the refugees.

Something has to give, but what?

One thought on “Camp of the Saints: Looking for Living Space”