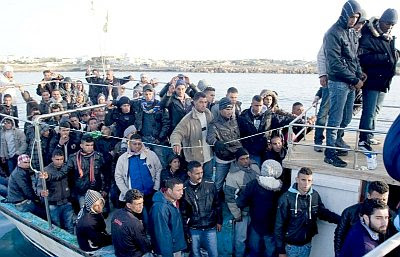 Italy received a week’s respite — or, as AGI puts it, a “truce” — from the landing of North African refugees on the shores of Lampedusa. The “Camp of the Saints” scenario took a brief breather, but today the flood of cultural enrichment resumed:

(AGI) Lampedusa — 77 boat people landed on the island of Lampedusa this evening. The migrants, whose conditions are fairly good, said the boat sailed off the Tunisian city of Sfax. The boat breaks a truce which lasted over a week

There’s no suggestion of what caused the “truce” — whether the Tunisian government was somehow persuaded to prevent the boats from leaving, and somehow managed to succeed in doing so. But in any case, the flow has started again.

During the lull, the European migration crisis moved up to the diplomatic level, as Italian Prime Minister Silvio Berlusconi and French President Nicolas Sarkozy met in a summit to discuss the tensions between the two countries over the Tunisian migrants and their persistent attempts to cross from Italy into France. Regular readers will remember that the Italians angered the French by issuing temporary residence visas to the newcomers, which would allow them to move freely through countries that are signatories to the Schengen Agreement. France, Germany, and most other EU countries objected to Italy’s actions. Schengen or no Schengen, they vowed not to allow any North African riff-raff into their countries, even if it meant reintroducing border controls.

Messrs. Sarkozy and Berlusconi now claim to have ironed out their differences and cut a deal. The Italians have agreed to help bomb the Libyans — which they had resisted up until now — and in return, the French have promised to look into reforming the Schengen Agreement. The French end of the deal sounds pretty vague — after all, the Italians will have to honor their end of the bargain very quickly, and start raining down ordnance on Libya. But any reform of Schengen must involve the entire EU, and could take years to achieve — assuming that major players such as Germany can be enticed into allowing any meaningful reform.

Here are some of the details of the proposed reform from AKI:

Rome, 26 April (AKI) — Italian prime minister Silvio Berlusconi and French president Nicolas Sarkozy together called for a revision of the Schengen treaty which removes border controls among the 25 European members.

“We both believe that in exceptional circumstances there should be variations to the Schengen treaty on which we have decided to work together,” Berlusconi said, echoing comments by Sarkozy at a joint news conference after a summit in Rome.

Berlusconi and Sarkozy said they have signed a letter to be sent to European Commission, the EU’s executive body to propose changes to the treaty allowing individual states to temporarily suspend the free movement of people under certain circumstances.

“We want the Schengen treaty to live, but to live it has to be changed,” Sarkozy said.

And La Stampa has more about the “bombs-for-bombast” aspect of the deal, plus the business deals that went along with it:

“Italian bombs on Libya in exchange for French help with the migrants”: that’s how La Stampa columnist Lucia Annunziata sums up the significance of the agreement signed yesterday in Rome between Italian prime minister Silvio Berlusconi and French President Nicolas Sarkozy. Apparently a reasonable deal, but, Lucia Annunziata notes, “one in which Italy is shouldering the heaviest burden,” as it commits the country to take part in NATO airstrikes on Libya. For its part, Paris restricted itself to “vague commitments” on reforming the Schengen agreements. One point of contention remains in economic relations: faced with the offensive from French companies seeking to take over the jewels of Italian industry, Berlusconi has put aside the economic patriotism of Italy and is backing the emergence of major Franco-Italian groups. In return, Sarkozy has assured Berlusconi of his support for the candidacy of the governor of the Bank of Italy Mario Draghi for the head of the European Central Bank.

The Netherlands — including Geert Wilders’ party — is willing to contemplate revisions to Schengen:

THE HAGUE, 28/04/11 — The Netherlands attaches importance to the open borders within the Schengen countries. But if other member states want to tighten up the Schengen treaty, The Hague is prepared to do so, according to Immigration and Asylum Minister Gerd Leers.

Leers said in a debate with the Lower House he has not yet heard anything about proposals which Italy and France want to make for changes in the Schengen treaty for free movement in the affiliated countries. French President Nicolas Sarkozy and Italian Premier Silvio Berlusconi discussed this in Rome on Tuesday. If however they want more scope for taking action in emergency situations, then they will find the Netherlands on their side, said Leers. “Then it could be a matter of temporarily increased control at the border.”

Italy has given thousands of Tunisians a residence permit for six months, with which they can travel through the Schengen countries. The Netherlands had already indicated that it was not happy with this. Closing the borders is however no solution for the stream of migrants from North Africa to Europe, said Leers.

The Party for Freedom (PVV) is in fact urging border controls, but Leers is not in favour of “again putting customs officials everywhere.” He did say that tighter checkups are being made on Tunisians wishing to come to the Netherlands with an Italian residence permit.

As in other countries, the foreign police at airports and border crossings look carefully at whether Tunisians who want to enter the country meet the requirements for this. They must have a passport and enough money for their own maintenance, and must not have any criminal record.

Italy has actually begun deportations, and there’s no indication that these latest deportees are known criminals, as was the case with some of the earlier repatriations.

Notice, however, that Italy is limited to sixty deportations per day, which is lower than the rate at which immigrants have been arriving since early in January — an average of about 300 per day. The Italians have sent back 650 since April 5, which amounts to about thirty a day — or 10% of the rate that would be required to reverse the flow.

Palermo, 28 April (AKI) — Thirty Tunisians were on Thursday due to be deported from southern Italy, where some 23,000 Tunisian migrants have landed since the unrest that toppled longtime president Zine El Abidine Ben Ali in January.

The migrants will be returned to their homeland aboard a flight from the Sicilian city of Palermo, under an accord signed by Italy’s interior minister Roberto Maroni and his Tunisian counterpart on 5 April, the Italian interior ministry said.

The agreement allows up to 60 Tunisian migrants to be deported per day on two flights. Rights group Amnesty International last week wrote to the Italian government urging it to stop “summary deportations” and guarantee the migrants are properly assessed for asylum and other forms of protection.

Italy has repatriated 650 migrants since the pact was signed, according to the interior ministry. The migrants are deported from Sicily and the Italian mainland after being transferred from the tiny southern fishing island of Lampedusa where most arrive from Tunisia.

To get a feeling for the sort of “help” the Italians can expect from the EU, consider this report about an EU court ruling which forbids the Italians to imprison illegal immigrants:

The Hague, 28 April (AKI) — Italy cannot punish illegal migrants with jail, the European Union’s Court of Justice said on Thursday. The ruling struck down a key piece of legislation passed by the Italian government to bolster the hardline immigration policies it pledged to implement while in office.

The EU Court of Justice ruled that jailing migrants contradicts an EU directive whose main objective is “to set up an effective policy to drive out and repatriate third country nationals whose stay (in the EU) is irregular, while respecting their fundamental rights,” the court said in a statement.

Under Italy’s 2009 law, migrants who enter Italy illegally and refuse to leave face a prison sentence of from one to four years and fines of up to 10,000 euros, followed by immediate expulsion.

A Italian court in the northern city of Trento had referred to the EU court the case of an Algerian, Hassen El Dridi, who in 2010 was ordered to leave Italy within five days because he did not have a residence permit.

El Dridi ignored the court order and was given a one-year jail term which El Dridi appealed.

The EU court said that following its ruling, judges in Trento should “disapply” the jail terms contained in Italy’s immigration legislation.

Italy’s interior minister Roberto Maroni said he was “dissatisfied” with the court ruling and was considering taking action against it.

“In the coming days, I will evaluate the consequences of this sentence and see what can be done to remedy it,” he said.

“The European Court of Justice’s decision leaves me dissatisfied because there are other European countries that have made illegal immigration a crime and have not been censured for this,” Maroni said.

“Second, if illegal immigration is legitimised, its decriminalisation together with an EU directive on repatriation will make it impossible to deport migrants,” he added.

Now, let’s think about this…

Illegal immigration should not be made a crime. Yet illegal activity is by definition a crime, so we may presume that the Humpty-Dumptys at the EU Court of Justice will soon be commanding new meanings for statutory words as they see fit.

In any case, Italy cannot imprison its illegal immigrants.

However, if it releases migrants from their holding facilities by giving them temporary residence permits, the EU squawks about that solution too.

EU human rights law also forbids Italy from turning away all those boatloads of culture enrichers.

As we saw above, despite its recent agreement with Tunisia, Italy cannot deport the migrants fast enough to turn the tide.

Every door to a normal, responsible solution has been systematically closed.

You see where all this is leading, don’t you?

Unless other European countries really do alter the Schengen agreement to allow for the movement of the immigrants beyond Italy’s borders — which is obviously what Mr. Berlusconi is hoping to get in return for bombing Libya — Italy will have to release the new arrivals into the general population and treat them the same way they do any other residents. The government will be required to feed and house the refugees — such is demanded by EU asylum laws — and, if they have trouble finding jobs, the state may have to continue to support them for years or even decades.

The EU has offered to help pay for the expense of all this enrichment, but that is the extent of its commitment to help. The crisis is to be quarantined in Italy, and the European Union will shoulder part of the costs.

As I’ve pointed out repeatedly, the “Camp of the Saints” crisis is much more than an economic problem. If present trends continue, it will destroy the social fabric of Italian civil society.

If you want to know what the new, culturally enriched Italy will look like, watch this video of street prayers taken just a few days ago:

What will Italian cities look like after 100,000 or 200,000 more immigrants have been released into the general population?

Does the rest of Europe think that Italy will simply allow all this to happen?

Hat tips: C. Cantoni and Fjordman. Many thanks to Vlad Tepes for YouTubing the video.

4 thoughts on “Camp of the Saints: Letting Diplomacy Work”