Update: I made two minor corrections to the second transcript, so if anyone has copied it, you may want to grab the new version.

The changes were suggested by Ann Barnhardt herself, who took a look at our transcripts this afternoon. She also posted this last night on her blog:

Over at GatesofVienna.blogspot.com they are doing a project called “A Rosetta Stone for Ann Barnhardt”. They are recruiting folks to translate and subtitle my videos into as many languages as possible. I support this effort wholeheartedly.

We’re definitely on the same wavelength — I get the sense she doesn’t sweat being called a “racist” or an “Islamophobe”. 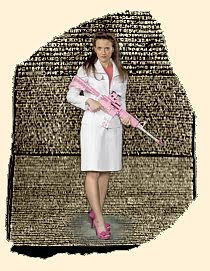 As announced yesterday, Vlad and I have mounted a “Rosetta Stone” operation for Ann Barnhardt’s Koran-burning videos: we aim to have them subtitled in as many languages as possible.

The transcripts are ready, thanks to the diligence and celerity of our volunteer transcribers (transcriptionists? transcribes?), who worked late into the night.

Now come the translations. Below is a list of languages for which people have volunteered up until now:

Anyone who wants to volunteer to do a language not included in this list should email me at unspiek (at) chromatism (dot) net, and I’ll send you the complete time-stamped English transcripts.

To avoid the “Blogger bug”, I’ve placed the original videos below the jump, followed by the complete transcripts.

12 thoughts on “A Rosetta Stone for Ann Barnhardt, Part 1”