I wrote last week about the apparent squeamishness at National Review towards the Counterjihad, or at least towards the more robust variety of anti-jihad thinking that prevails here and at other “Islamophobic” websites. One gets the impression that most of the writers and editors at NR consider our viewpoint a bit over the top — “I can understand their distaste for Islam, but do they really have to be so vulgar and… well, extreme?”

My disappointment has intensified as I work my way through a pile of back numbers of National Review. Today, when I turned to page 18 of the March 7th issue, this is what I saw: 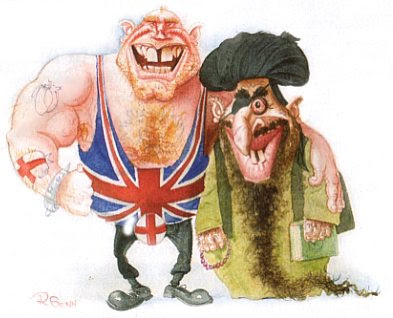 Yes, you’re right: that fellow on the left is National Review’s impression of what a member of the English Defence League looks like.

And it’s probably no surprise that the accompanying article, entitled “The Brute and the Terrorist”, was written by Anthony Daniels, a.k.a. Theodore Dalrymple.

A few weeks ago we discussed Dr. Daniels’ offhand characterization of the EDL as “street fascists” or something similar, but in this article the same theme has been greatly expanded. The proximate occasion for his elaboration was the EDL’s recent rally in Luton, which was featured here in depth on the day it occurred and for several days afterwards.

Dr. Daniels tells the reader that “Luton is an unlovely town in Bedfordshire, regarded as a bad joke in England,” and refers to the English Defence League as “the soccer-hooligan wing of British politics”, describing its supporters as “some of the most unattractive members of our unattractive society”.

Or do you think he may never actually attended an EDL demonstration at all?

Most of his article is about Multiculturalism in Britain, and is very much to the point. But he feels strongly enough about the EDL to make room for this choice little paragraph:

Of course, a large part of the problem is that patriotism in Britain has been left to the brutes: the kind of ignorant savages who tattoo a bulldog on their biceps and “Made in England” round their nipples, and who in equal measure revolt and terrorize the cheaper resorts of the Mediterranean. The intellectual’s equation of patriotism with xenophobia, and pride in past achievement with an arrogant superiority complex, has left a population demoralized and without any belief in its own nation. George Orwell saw this happening a long time ago; it has created a vacuum for the English Defence League to fill. Multiculturalism is the other side of the English Defence League coin.

In other words, in Anthony Daniels’ Britain, Multiculturalism = the English Defence League.

I can imagine Dr. Daniels’ thoughts on this subject:

“They’re both sets of brutes, you see. You can have your Pakistani brute, or your Lutonian brute; but they’re all brutes. Why d’you think I live in a villa in France? One cannot maintain one’s civilised standards in an outpost as barbaric as 21st-century Britain.”

If one were not charitably inclined, one might suspect that Dr. Daniels is perhaps… somewhat of a snob? A bit taken with his own superior cultural attributes, and lacking an essential noblesse oblige?

But that can’t possibly be the case. National Review wouldn’t turn over so many precious column inches to a snooty self-righteous upper-class Englishman.

They’d never do that, would they?

In the interests of fair play, it would behoove National Review to offer space in both their digital and dead-tree editions for a response by a capable writer who has the knowledge and skill to tell the real story of the EDL.

Therefore, I have a modest proposal, but in order to accomplish it I will need the help of legions of stalwart Gates of Vienna readers.

First of all, I propose Paul Weston as the man for the writing job. I haven’t asked him yet, but knowing him as well as I do, I’m certain that he will step up to the wicket, take hold of the bat, and do what England requires of him.

After that we will need to get the attention of National Review. That’s the hard part — the editors will pay no mind to a lowly blogger such as myself.

So, for the second task, I will need your help. Any reader who is familiar with the English Defence League and objects strongly to Dr. Anthony Daniels’ characterization of it should contact National Review.

It wouldn’t do to give them any more snobbish ammunition than they already have.

I found the “The Brute and the Terrorist” by Anthony Daniels (issue dated March 7th, 2011) to be ill-informed in its depiction of the English Defence League. It was needlessly harsh, and not up to the usual standards of Dr. Daniels or your esteemed publication.

In his article the members of the EDL were unjustly characterized as “unattractive”, “brutes”, and “ignorant savages”. Anyone who has any acquaintance with actual members of the EDL knows these descriptives to be outrageously false.

The EDL’s cause is worthy, and its members are dedicated and courageous. Your magazine has done them a grievous disservice by permitting the publication of Dr. Daniel’s ill-chosen words.

Simple justice requires that you allow the publication of a rebuttal piece in your pages. It should be written by the Hon. Paul Weston, a prominent English author and former parliamentary candidate for UKIP who is well-acquainted with the English Defence League. I am certain that his words will set the record straight for your readers as well as for Dr. Daniels.

The only way our modest proposal can have any hope of success is if a large number of people contact National Review with their objections, and request the publication of a rebuttal. To that end, here are various methods of contact:

For pitching an article: submissions@nationalreview.com?subject=Submission

For a letter to the editor: letters@nationalreview.com?subject=letter

This is the address for the Corner: corner@nationalreview.com

If readers want to recommend alternatives or suggest improvements, please leave a note in the comments. This will be a group effort; I need your assistance.

11 thoughts on “A Modest Proposal for National Review”